Kenneth Tam on WE ARE NOT COVID and Deconstructing Masculinity

The former Pioneer Works resident artist talks to Vivian Chui about anti-Asian harassment in the wake of the COVID-19 pandemic and his latest work breaking down male homosociality.
art 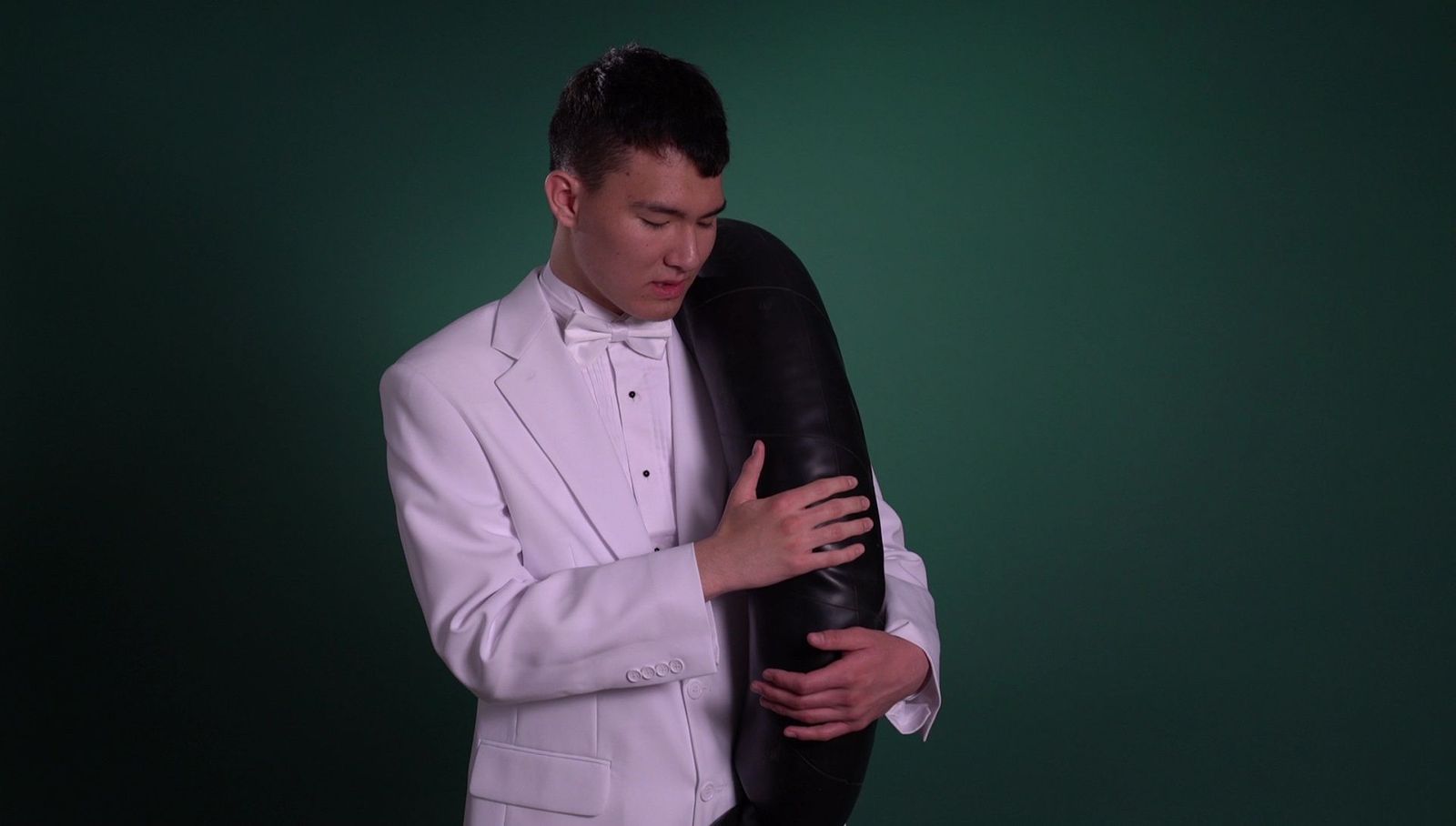 Kenneth Tam, All of M (still), 2019. HD video, color, sound. Courtesy of the artist
BY Vivian Chui
Born in Hong Kong and raised in Los Angeles, Vivian Chui is the Associate Curator at Pioneer Works, as well as an independent contributor to publications such as Cultured and Ocula Magazine.

In recent months, Asian Americans—wrongfully maligned with the outbreak of a deadly virus—have been stabbed, punched, spat on, taunted, refused service, and even burned with thrown acid. The Asian Pacific Policy and Planning Council recorded over 1,100 of such incidents in merely two weeks, yet media coverage has largely been either relegated to the writings of concerned Asian Americans or buried beneath the avalanche of news about the seemingly innumerable consequences of the pandemic. In addition to worrying about their health and financial income, individuals of Asian descent now also need to consider their safety when venturing from their homes. Still, it remains difficult to determine what collective action can be taken to combat these vitriolic attacks.

The Queens-born artist Kenneth Tam, for one, has decided to create a spreadsheet titled WE ARE NOT COVID. Unlike other incident report forms, his is publically accessible on Google Drive. Although it is not intended to become a comprehensive source and has mostly only been disseminated by word of mouth, it offers an unfiltered glimpse into what Asian Americans are currently experiencing. A few excerpts:

“Someone smashed the front window of a Chinese hot pot restaurant in my neighborhood.”

“A middle aged white woman screamed at me from afar, in the parking lot of Whole Foods on Fairfax in Los Angeles, to go back to my diseased country.”

Tam considers the spreadsheet to be independent from his art practice, which examines normative masculinity as a social construct. In his video works, men of different backgrounds and age-brackets are asked to perform made-up acts, in playful reenactments of common rituals such as high school prom and summer camp. As an unseen participant, Tam guides these actors with directives and questions that gently tease out their vulnerabilities. Equal parts humor and quiescence, his scenes expose the psychological underpinnings of male homosociality. By creating these works, the artist excavates the group settings where individuals make the idiomatic transition from boys to men.

In this conversation, Tam reflects on anti-Asian racism, the deconstruction of masculinity within his work, and the quandaries newly posed by his current reality. 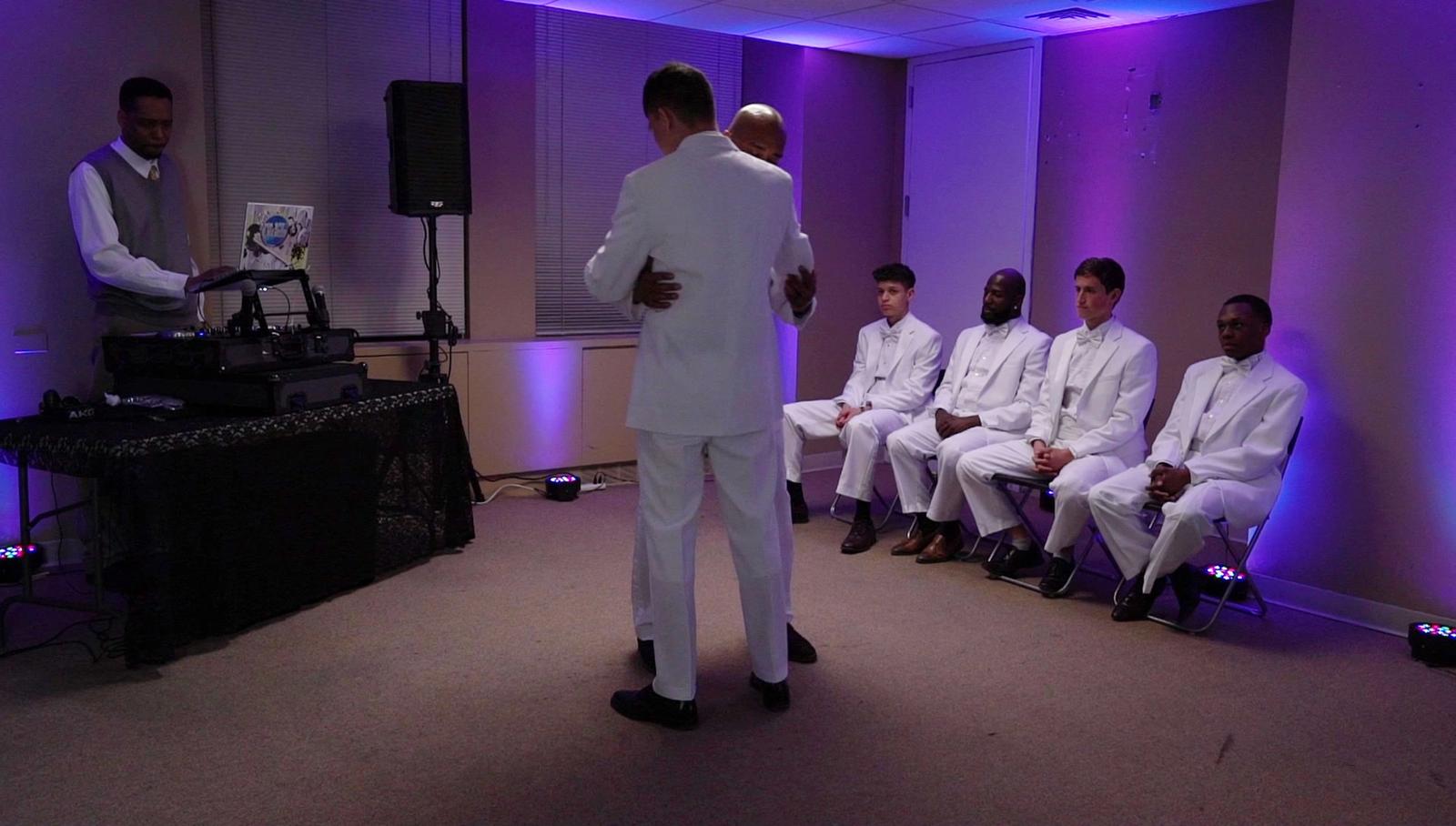 You created WE ARE NOT COVID, where people can anonymously record their encounters with the anti-Asian racism that has emerged—or, perhaps more accurately, reignited—in the wake of the pandemic. What compelled you to start the document, and what has it been like to read through the responses?

The document started because a friend, who lives down the street from me in Bed-Stuy, recounted an incident that happened to her in our neighborhood. While I was aware that things like this were happening throughout the country, hearing about it in the same neighborhood where my partner and I are regularly outside really unsettled me. It made me realize how I needed to educate myself about the prevalence of these attacks.

I also understood how Asians, in particular, have dealt with racism in the past. They often minimize the experience—perhaps out of shame or embarrassment—so these stories only exist as passing anecdotes between friends or family, rarely reaching a larger audience. I thought that a transparent, crowdsourced document might be a way to collect these fleeting encounters, and give space for people to share personal and painful experiences, in order to build awareness and even vigilance. By aggregating what might be otherwise dismissed as casual, everyday racism (which really should be neither casual nor everyday), readers could start to understand how pervasive the problem actually is.

I created the spreadsheet about three weeks ago and, while I know that it only skims the surface of the actual number of incidents happening daily, one cannot read through it without feeling saddened, disgusted, and even angered. It is an ugly, unvarnished document, and I think the larger story of this pandemic would be incomplete without understanding how the AAPI community has been targeted and scapegoated up until now, and likely well into the future. 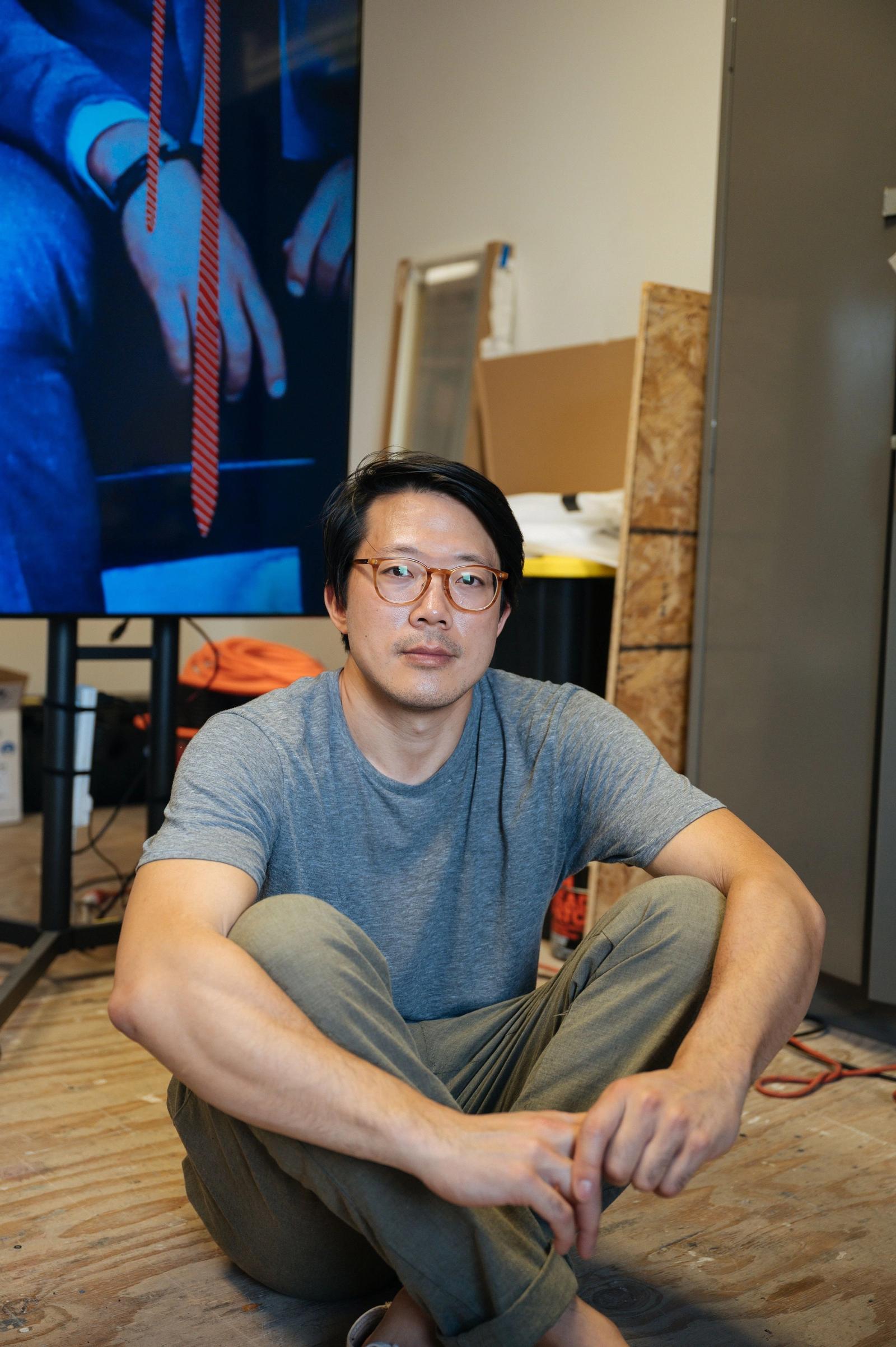 Kenneth Tam in his studio at Pioneer Works
VC

You are slated to debut a new project at the Queens Museum later this year, though I know that the timeline may have shifted. Could you share what that will entail?

The project at QM follows a similar format to previous videos, but this time works with a much more specific group of participants. It is conceived as a video installation, perhaps multi-channel, that looks at the idea of what Asian American masculinity might be. Asian men have long been maligned for not being masculine enough, at least when placed in relationship to normative Western standards. I wanted to explore the possible negative repercussions of that, but also look at how not conforming to that expectation can lead to other, less oppressive expressions of male performance.

I use the stock figure of the cowboy, as both a foil and as something that might be re-imagined when performed by Asian men. The cowboy has historically been a trope for idealized American masculinity and, in popular cultural representations like Westerns, Asian men—when they appear at all—are often there to basically reinforce the dominance of their white counterparts. By having my participants play that role, I want to try to locate a way in which 'Asian-ness' can subvert these rigid gender performances, and perhaps create new spaces for themselves that can prioritize vulnerability and the sensual. 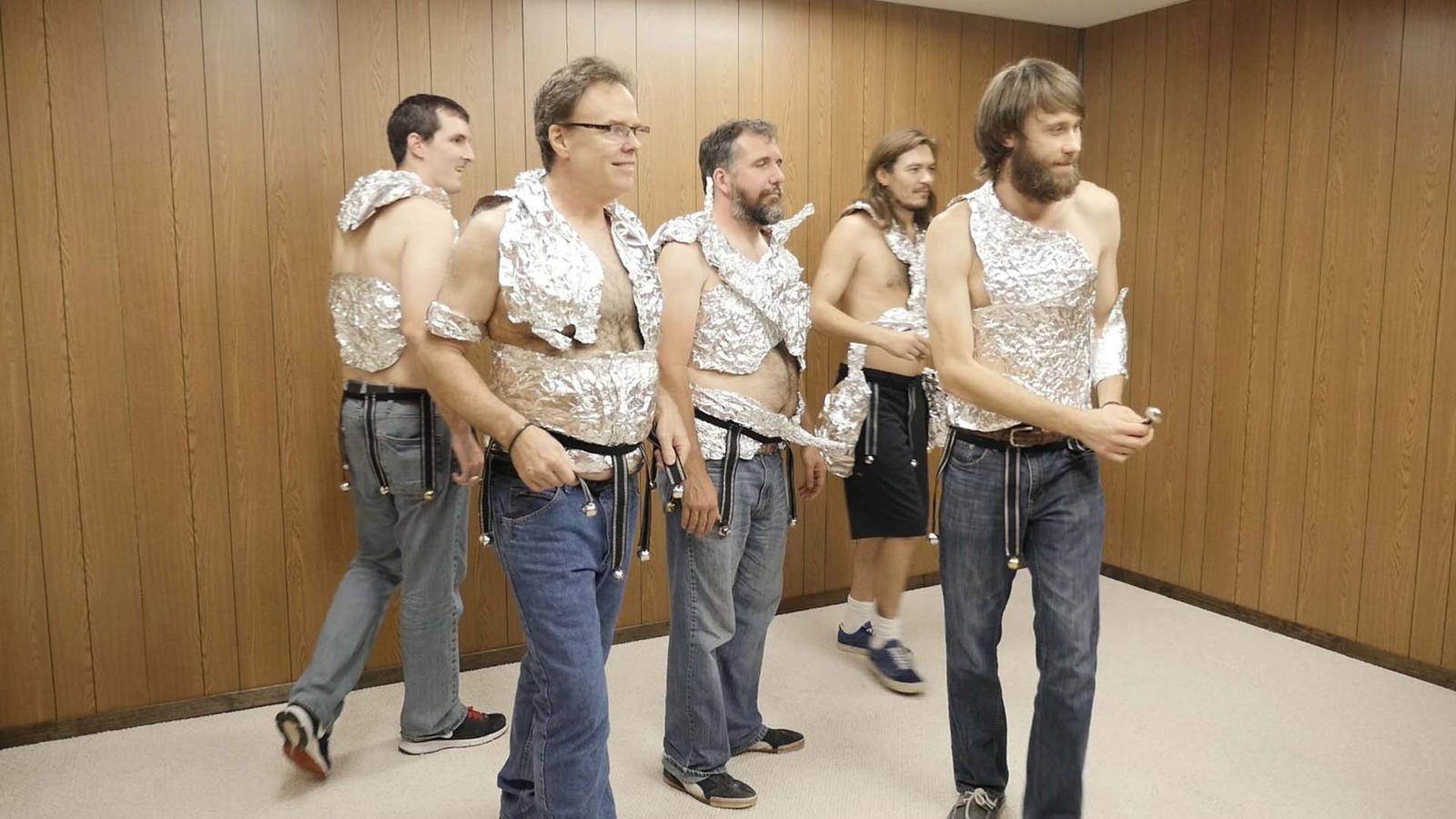 Women are decidedly absent from your work, which—like the project just described—magnifies the social pressures that are both put on and self-enforced by men. Your practice comprises what I consider to be a series of imagined social experiments, where men are asked to candidly talk about themselves in the midst of reenacting various experiences. What is your impetus for that?

For the past five years, my projects have revolved around working with small groups of men in staged but improvised situations. I’ve asked them to participate in activities that explored how ritual can both reinforce and re-imagine their social roles. A previous work, Breakfast in Bed (2016), assembled a group of strangers to participate in a mock men's social club, where they engaged in a variety of games, speaking exercises and other (often very silly) physical acts—all of which called into question the limited space for male performance within groups. Another project, All of M (2019), used the high school prom as the vehicle to examine both ritual's role in forming male identity and the physical trappings that create these moments of homosocial belonging. 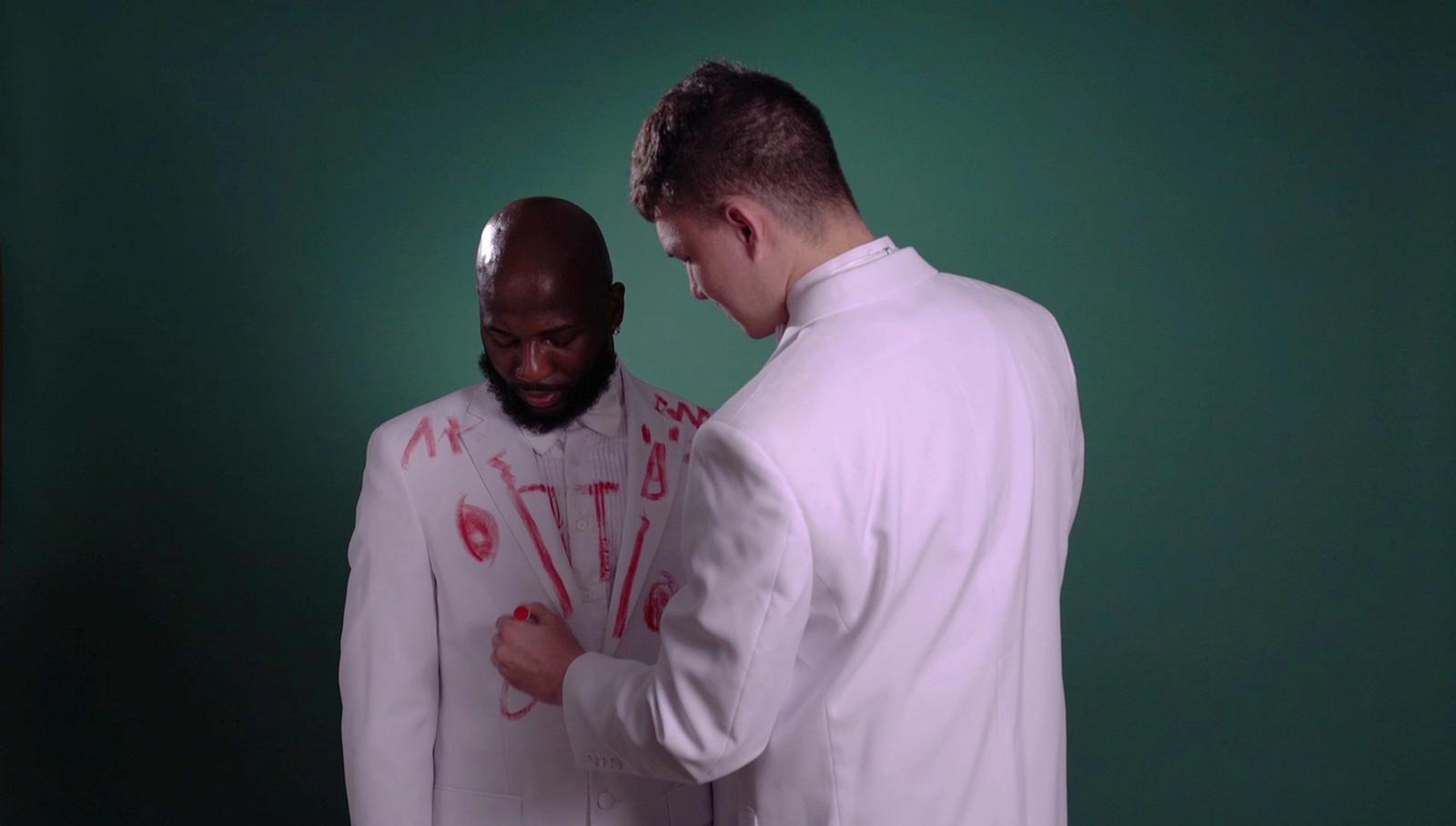 In all these instances, I'm interested in creating situations that use intimacy, awkwardness, and vulnerability to essentially deconstruct certain performances of masculinity, and to perhaps imagine less oppressive versions of that performance. I am merely trying to shift the way my participants imagine what their own roles are within a wider social field. While there are certainly many markers that play into how people construct their identity, I still find the performance of masculinity to be an under-scrutinized one; one whose privileges map onto the inequalities that we find reproduced in many spaces.

Are the videos at all scripted?

I like to say that, even though nothing I do is scripted, my participants come prepared with a certain amount of internalized social scripting that I'm interested in playing with. To that end, we certainly talk about the activities that they're going to do before going in front of the camera. Whether or not that actually affects their on-camera performance is debatable, as I try not to prepare them too much, or give them any direction. I'm much more interested in their improvised, un-coached responses, and their awkwardness helps create that space of uncertainty and unrealized potential that I'm trying to locate in my work.

How have you been occupying your time during this period of isolation?

To be honest, it has been hard to focus too much on anything during this period. I have a newborn at home, and he's actually been helping keep things sane and less depressing inside the apartment. During the first few weeks, I was preoccupied with figuring out how to teach my two studio art classes online, and that’s still a work in progress.

When I have time to read, mostly it’s a mix of research and other non-fiction I've had on my list for far too long: Maurice Berger's White Lies; Anna Tsing's The Mushroom at the End of the World, which seems oddly appropriate right now; Ellen Wu's The Color of Success: Asian Americans and the Origins of the Model Minority.

I've also started casually reading about Taoism, specifically Taoist funeral rites. I have a residency at The Kitchen later this year, and I'm planning on choreographing a live performance that combines these rituals along with those used in the initiation ceremonies of Asian-American fraternities. Along those lines, I now have to figure out how one works with performers, or any group of people in an intimate setting, in a post-quarantine world. I joked with the curator that I'll probably need to incorporate face masks into the costumes I'm planning, and now that actually seems very reasonable, if not totally necessary.

I recently watched Honeyland, which is a beautiful documentary about a Macedonian beekeeper that feels like fiction. It speaks to the fragile relationship between humans and the natural world, and the ruinous path of unchecked capitalism. Not that we need yet another reminder.

There is the mass of materials art institutions have been putting out that I've been casually sifting through. I have to say that the rush to develop online content, in particular livestreamed talks and performances, has probably had a net negative impact on my isolation, in that it has created a new sense of FOMO which I was hoping to avoid during what was supposed to be a major pause from how we usually do things.

I'm also working with a group of artists and curators to try and develop a response to the COVID-related racism, which we will be calling STOPdiscriminASIAN. It incorporates part of the spreadsheet, and will provide a new way for people to add to it. It hasn’t officially launched yet, but stay tuned!