Label co-founder Scottie McNiece on helping bring uncompromising music to new listeners.
music
The Chicago-born label aims to help expand audiences for the constellation of artists it works with.Carolina Sanchez.
BY Liz Pelly
Liz Pelly is a writer and editor based in New York. She covers music, culture, media, streaming and the internet. She is a Contributing Editor at the Pioneer Works Broadcast and The Baffler, and co-authors the music newsletter Cryptophasia.

After years of Myspace-era punk touring and self-booked four-band bills, Scottie McNiece was feeling burnt out. Tired of pop punk monoculture, when he stumbled into Chicago’s jazz-adjacent improvised music scenes, he was engrossed by the level of craft he heard. “It was the punkest thing I'd ever seen,” he recalls. “These people are doing this incredibly difficult music, and they're so dedicated to it that they don't give a fuck what you think. I was very drawn to that.” The shows were life-affirming, but when he looked around, it was often just him and a few middle-aged men in attendance. “My instinct was, I need to get more people here,” he says. “There’s this whole world of people out there who want to hear new things, and are looking for new things. But people need entry points that are appealing.”

That has since become a mission statement of sorts for the label he co-operates, International Anthem, one of most compelling hubs for jazz and improvised music in recent years. The label itself prefers a more open-ended definition, calling itself a “recording company that produces and promotes progressive media.” Since 2014, it has released celebrated work by free jazz drummer and beat experimenter Makaya McCraven, the avant-garde and confrontational trumpeter jaimie branch, spiritual jazz clarinetist Angel Bat Dawid, and improvising protest collective Irreversible Entanglements, to name a few. The label specifically aims to expand audiences for its constellation of artists, helping bring new, uncompromising sounds to uninitiated listeners.

International Anthem is an intriguing case study in the value of an independent record label in the year 2021—in the role that labels can still play in connecting dots between scenes, framing new music in ways that draw listeners into the work, and rooting new music in a sense of place at a time when music discovery feels increasingly placeless. It’s a testament to the way the label grew out of physical show spaces. Years before its first release, McNiece was bartending, and he began running a series at the restaurant where he worked. The owner was willing to give him $300/week as a guarantee to the musicians. He didn’t have any trouble booking out the calendar. At the time, in the Chicago improvised music scene, that was a good gig. (“Unfortunately,” he clarifies.) 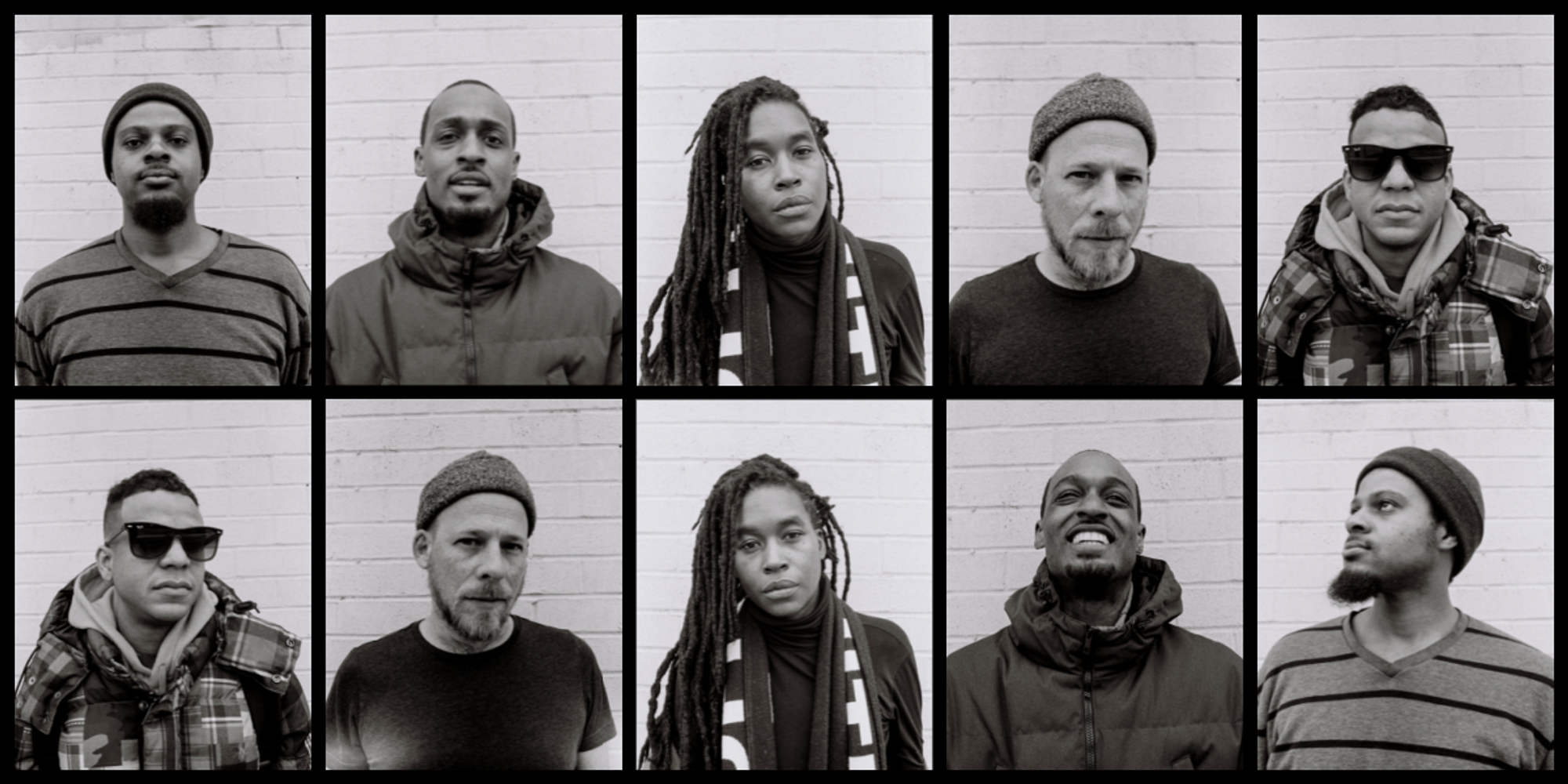 Still somewhat of an outsider in the jazz world, part of how McNiece enmeshed himself was by putting the same care and attention into these shows as he did when his own band was touring. He started up an email list, and every week would write about who was playing at the restaurant. He’d CC all of the musicians who had played the series before, plus some friends, family, and co-workers. He’d see the artists play around town, research their work (and the historical context this work grew out of), and craft thoughtful write-ups: “Who knows, maybe some people hated the way I wrote about them, but a lot of the musicians were like, ‘Man, I really appreciated what you said about the music, thank you for listening.’”

Another thing he did for the show series—which he says was directly inspired by his own days DIY touring—was to make sure everyone was fed. For his first show series, a meal would be provided by the restaurant, and after the gig, everyone involved would sit for dinner. For his next series, he and his partner at the time would make food together and bring it to the venue. When he reflects on that time now, he thinks about how that was a service-industry hospitality job, and in some ways, still feels like that’s what he’s doing: “I think of myself as someone who needs to act in service of the music.”

There’s this whole world of people out there who want to hear new things, and are looking for new things. But people need entry points that are appealing.

The first releases came about when he started recording some of those live shows he was booking, with help from his friends David Allen, who eventually co-founded the label with him, and Dave Vettraino, who is also involved with the label. One of the label’s first records, Makaya McCraven’s In the Moment, was created from live recordings made at various performances in the same restaurant over the course of a year. In the cracks of the recording, listeners can hear glimpses of people eating dinner, talking to each other. The space itself seeps into the sounds. A small strip of paper wrapped around each copy described it this way: “Nearly 48 hours of live improvised performance recorded at 1 venue over 12 months and 28 shows - culled, cut, rendered and remixed into 19 potent pieces of organic beat music."

From the beginning, every International Anthem release came packaged in a Japanese-style obi strip printed with a short bit of writing about the recording. “We were inspired by catalog labels, and we loved the aesthetic of them,” McNiece explains. “But also thought, it’s a little intrusive to expect every artist to have cover art that looks kind of similar. Well, what if it's removable?” That packaging style has since become a staple of the label’s output, and as time has passed, the writings on the packaging have become more creative. On the strip included with the most recent Irreversible Entanglements album, Open the Gates: “Ethereal, dynamic & expansive free jazz meditations manifest coruscating portals of aqueous regeneration; a collectivist ultra-sonic healing conveyance.” 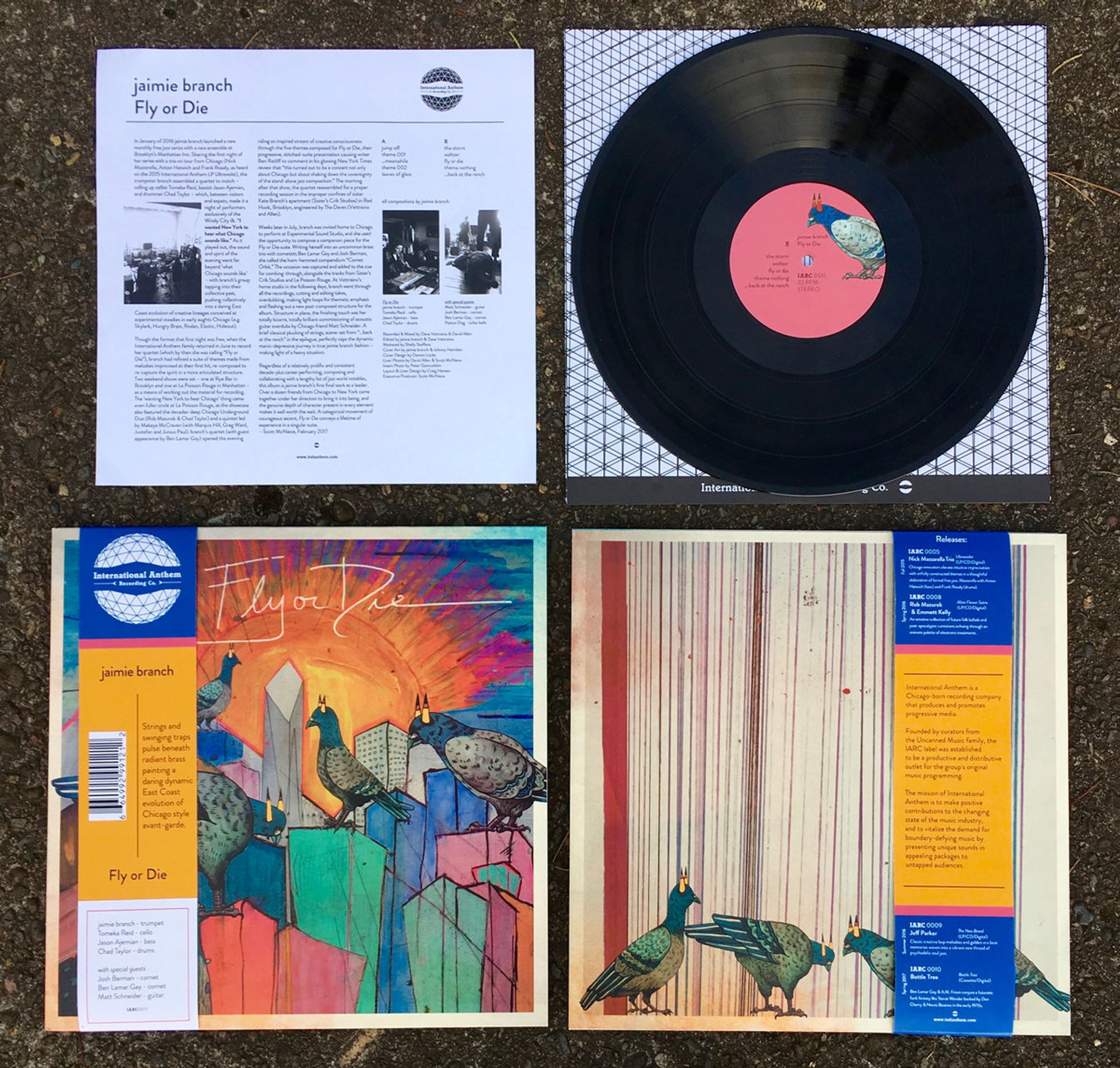 Album artwork and packaging for Fly or Die by jaimie branch, a former Pioneer Works music resident.Courtesy of International Anthem.

“Writing those blurbs for those obis is one of the few slices of uncompromising joy I have in the world,” McNiece says, laughing. “To be able to think about poetry and how it can be part of the package, I think it’s incredibly important. With the right words on the cover there, you can really draw people in. If you think about the experience of flipping through bins at the record store, it’s not every day that you see a stanza of verse describing the music on the front of the record.”

Ultimately, those brief cover-package writings are part of a bigger project, expanding the context on the records in ways that invite new listeners into the music—especially ones who might think this type of music is not for them. In the view of International Anthem, complex, instrumental music is for everybody, and simplicity is not a prerequisite for accessibility. “This music is played by people who approach music in a very ancient way, where it’s about the music, and it's about performing it, and being as adept as you possibly can be on your instrument, so that you can be as much of yourself as possible, without having to mimic something else.” There’s an inherent humanness, despite the technical complexity, that he believes most listeners have the capacity to connect with.

“I don't think that music that is creative or challenging needs to be relegated to the fringes the way that music industry mechanisms often do,” he continues. “When you think about the people who have the most gatekeeping control over what's happening, there's a whole lot of underestimating happening. Accessibility for me is a refusal to underestimate the average person. Instead of just assuming they're going to only listen to Shawn Mendes or whatever. This person can like anything, you just have to find a way of connecting with them.” ♦