Avant-Garde Rasanblaj
(A Meditation on PÒTOPRENS)

The Black aesthetics of the first Black Republic.
art
Installation view of “PÒTOPRENS: The Urban Artists of Port-au-Prince,” Pioneer Works, Brooklyn, September 7 - November 11, 2018.Photo: Dan Bradica. Courtesy of Pioneer Works.
BY Gina Athena Ulysse
Dr. Gina Athena Ulysse is a feminist interdisciplinary artist and professor of Feminist Studies at University of California-Santa Cruz. Her latest books are: Why Haiti Needs New Narratives: A Post-Quake Chronicle (2015), and Because When God is Too Busy: Haiti, me & the World (2017).

To coincide with the release of the publication PÒTOPRENS: The Urban Artists of Port-au-Prince, which celebrates the titular 2018 Pioneer Works exhibition, Broadcast is publishing below the volume's essay Avant-Garde Rasanblaj by Gina Athena Ulysse.

1/ Genocide. MAGUA. MARIEN. XARAGUA. MAGUANA HYGUEY. 1492. Columbus landed. Annihilation of indigenous populations. Destructions of natural habitats. Species dominance. 1517. Slavery. Met Simitye, look at what the mortals have done! Colonialism. Humans as chattel. 1685 Code Noir. Brutal and horrific practices of exploitation and exchange. Genealogies of Othering. In Black Marxism, Cedric Robinson insists that, “As a material force … racialism would inevitably permeate the social structures emergent from capitalism … (‘Racial capitalism’) refer(s) to the subsequent structure of historical What this system could not ingest, it discarded—for Profit. ZONG! Ship name: Compte d’Angiviliers Voyage began 03-30-1786 868 boarded/588 survived. Ship name: Aigle Aguila Negra Voyage began 07-16-1702 500 boarded/107 survived. Ship name: Henriette Voyage began 01-28-1738 500 boarded/134 survived. Ship name: Marie Françoise Voyage began 05-19-1726 400 boarded/80 survived. Ship name: Aigle Voyage began 07-12-1786 391 boarded/260 survived. Ship name: Saint-Jacques Voyage began 10-02-1741 239 boarded/162 survived. By year XXXX the number of enslaved Africans in Saint Domingue had reached XXX,XXX. We do know the Atlantic Ocean is a sea of mass graves. Petrified bones. Wood. Stones. Broken pieces of china. Cloth. Canons. Glass beads and other fineries. “(C)apital can only be capital when it is IMPERIALISM. Look at what the mortals have done … Brandings. Dehumanization. Power. Domination. Sexual violations. A reshaping of the psychic landscape. Spirit-breaking. Miscegenation. Categories. Fragments. Materials with symbolic referents. Capital signs. MAKANDAL. As the site of the only successful slave revolution in the world, Haiti has been a breeding ground of radical Black imagination. Demystifying scientific racism, Anténor Firmin defended the Black Revolutionaries. In his tome, On the Equality of the Human Races, Firmin wrote, “undoubtedly, there comes a specific moment when political events occur as if by destiny, regardless of our wishes. The human spirit progresses and often inspires some inner process, which ultimately shakes nations and leads them to unavoidable commotions from which emerges a new era with institutions that are better suited to the

2/ The chains of servitude may have broken, and still, freedom remained elusive for the majority. Hard work = Surplus value. For those without and who-will-never-own the means of production. Disposable, the proletariat will be eaten alive. Toiling the land. Since its emergence, this racial capitalism has always been gothic, cruel and monstrous, “constantly sucking in living labor as its soul, Some contend Marx knew: “Capitalism is a crime whose most obvious analogue is cannibalism … We are only our capacity to work … bodies and brains are mutilated into This structural violence cannot be extricated from black ontology. From the experience, always gendered, of living in a system that seeks daily to obliterate the most

These are les damnés de la terre, the masses left behind by a Revolution that worked but did not fix everything. IT could NOT fix everything. AYITI has been at the avant-garde. On a fast track. Manmade and natural disasters. During the last two centuries, the former Pearl of the Antilles has remained at the forefront of economic, political and social mechanics and machinations ushering in dystopic futurity. This contradiction was captured by André Eugène in conversation with literature scholar Sibylle Fischer. Commenting on Atis Rezistans’ sculpture “Freedom!” Eugène said “Haitians fought for their freedom many years ago, but that’s not freedom if you don’t have anything, no food, no electricity, no books and can’t send your children to school. People in my country are fighting for this Fischer punctuated his point: “Freedom from slavery as just another monster, a monster that rose from the debris of the monstrous society that was defeated in That monster continues to morph, taking its shape from both external and internal pressures. Geopolitical out-maneuverings. Occupations. Dictatorships. More occupations disguised as humanitarian aid. Class War. Illegitimate elections. And the mortals continued to do things. Indeed, insofar as it has been dubbed prebendary, or predatory, the state treats the dead as they do the living, prompting a rallying cry: “nou se mo vivan!” In the aftermath of the January 12, 2010 earthquake: we are the living dead! 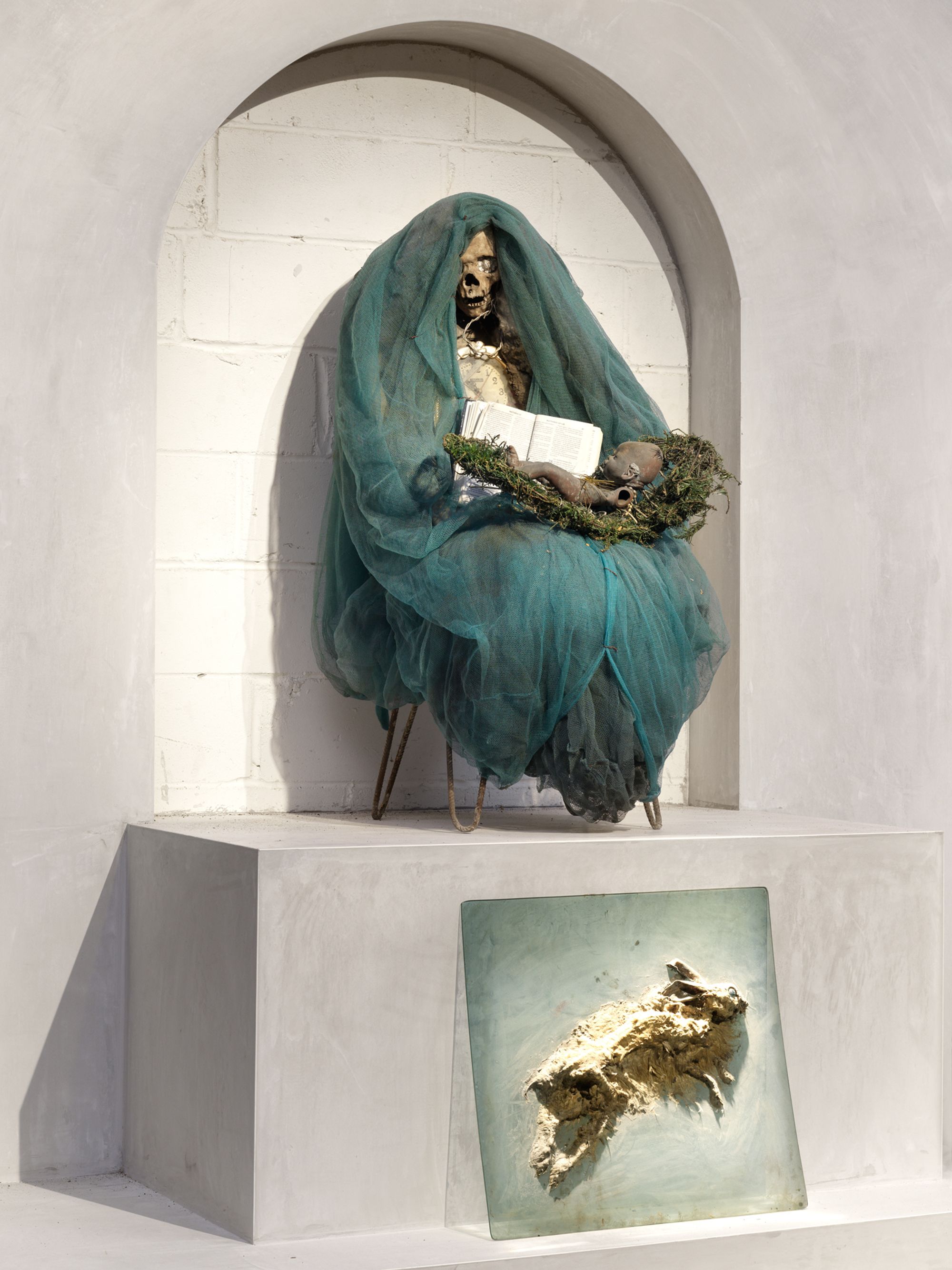 3/ Or are we? Are they the living dead? Is PÒTOPRENS not a visual requiem? Does pondering over Fred Moten’s question—“What is the relation between political despair and —allow us to resituate Haiti, with its longue durée of suffering, as a point of departure in explorations of radical Black diaspora traditions? Without simply reducing artistic expression to one’s conditions, how do we recognize and honor the verve? The will to live? The impulse to oppose? RESIST. Meanwhile, Jean-Claude Saintilus’ mo vivan, his spectral figures from the Grand Rue, continue to exist in liminality between life and death in a country many deem invivable. Unlivable. They have nothing to lose. “God Money… I’d rather die than give you control. Bow down before the one you serve, you’re going to get what you The longest neocolonial experiment in the West The people are in the midst of a rebellion at the time of this writing: #KoteKobPetwoKaribea. A hashtag campaign demanding accountability for state corruption developed into a series of mass protests culminating in what organizers called Operation Lockdown. The country was brought to a standstill in February There have been uprisings elsewhere: Brazil, Mexico, Pakistan, Turkey, Venezuela, South Africa, the United States. People are rebelling against BIG CAPITAL. In that regard, the first Black Republic is no exception. It is not lost on the poorest that they are structural casualties of a new gilded age typified by an ever-vaster gap between the wealthy and the rest that makes a mockery of the Gilded Age.

This inequality, for those among us who inherited sacrifice, is not new. Being cheap labor demands an embrace of precarity as daily practice. Yet, in this land every breath still offers promise. Who gets to breathe? Who is suffocating because they must hide? Who is safe to walk alone? Who must walk together to survive? Manbo Madame Jacqueline told me, “When you do a rasanblaj, you have to gather EVERYTHING.” Nothing gets left behind. Needing to discern creative survival from artistic production, we struggle to make sense of what fuels expression, because the western modernist frame relies upon a racialized taxonomy that requires Black art to answer to Europe in order to be perceived as ART. U.S.-born artist Kerry James Marshall whose work sits in at the crossroads of the Black Atlantic espouses the notion of a “black aesthetics,” which he describes as “an atmosphere, a tone, a ‘vibe’… (I)t is glamorous and impoverished, structured and improvisational, naïve and sophisticated, brash and abject. Its first principle is a desire for self- A desire to be SEEN and understood NOT as Other but as self. Nuanced. It is in this discursive and embodied Black diasporic landscape, a space of self-referentiality formed against the translucent shadow of global anti-blackness that we find the tenets of rasanblaj. Imperatives. Ancestral. Liberation. Agony. Love. Defeat. Regeneration. Vibrations. This “vibratory art,” as Patricia Donatien calls it, stems from Yoruba heritage that survived the Middle

It is work imbued with the poetics and aesthetics of Vodou. Refusal. SELF rooted in the foundation of one’s being. As Amiri Baraka described it in his poem “Leadbelly Gives an Autograph”:

"Build me an equitable human assertion

of the West. But I provide the stock. The beasts 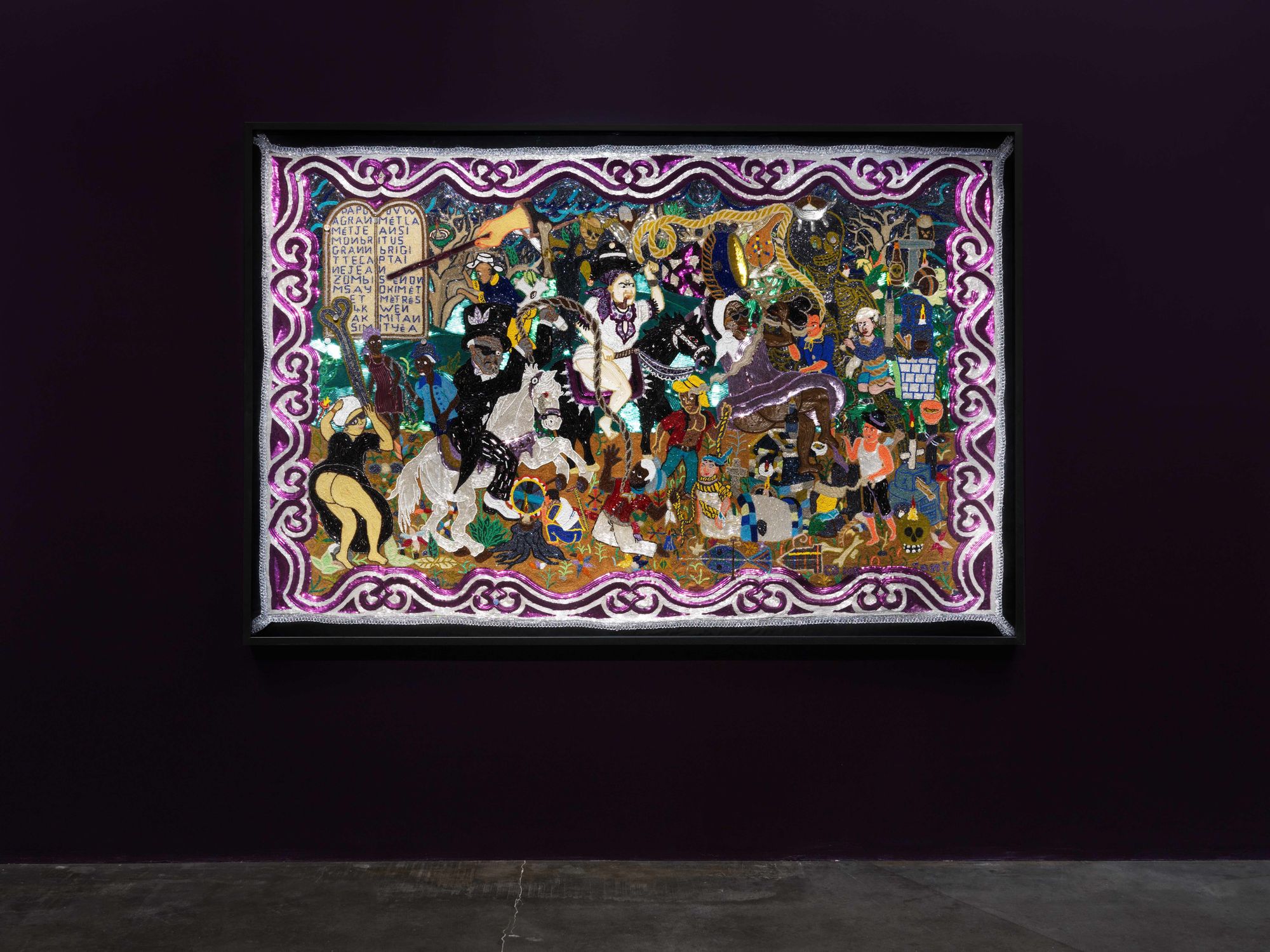 4/ For centuries Haitian artists have been naming the stocks, the beasts and myths. In the process, they have been actively undoing enlightened reason. Surfing rogue waves that separate the sacred from the profane. Prescient surrealists. Intertwining the material with the spiritual. Stripping what they can off imperial debris to reveal “trace elements” of Taíno Transcending times. Spaces. Ti Pelin’s granite sculptures bear the weight of history reincarnated as Neo-Zemis. Time traveling indigenous deities for the twenty-first century. Not only humans made THE CROSSING. The spirits that crossed the ocean given the name Atlantic had come before Some remained undomesticated. Lwa Lakou. Djab. Sacrifice. Anthropomorphic spirits require surrender. To be served. An offering. Perhaps a condition for accompaniment through the journey. Sèvitès, those who serve the spirits, are but obedient children in a world of elders. Lilliputians among the Brobdingnagians. Mere dwarfs in a world of The ghoulish mammoth or colossal ghoul that is racial capitalism is a DJAB, rapidly engorging—transforming—all that stands in its wake. Unreflectively arrogant. Fleeing Eden incapable of embracing its radical vulnerabilities and cruelest extremities, and displacing these onto Otherness. Blackness. In Haiti, the Racial Capitalist Monster found its antithesis in a revolutionary kind of Blackness. Blacks of a particular kind who refused to forfeit attachment to what was not left behind. Nothing gets left behind. WIND. Ohh... the incessant fascination with her so-called resilience. For only superhuman qualities could explain their persistence in this abandoned nation. Tout moun konen djab pe djab men djab pa manje djab (Everyone knows devils are afraid of devils but devils don’t eat other devils). A gift or another form of parity. Ogu’s been quietly inhabiting the grounds of PioneerIRONWorks since it was built in 1866. REDHOOK. A former factory. One of the largest industrial machine manufacturers in the United States. Machinery for railroad tracks and sugar plantations!!!!!!! They remained even after the fire of 1881 burnt the place to the ground. They waited, for the time had not yet arrived for their rasanblaj. A homecoming. A date with history. Face to face with Lady Liberty. Eugène’s Danbala slid up the wall with his consorts—all seven of them—to get a better view. Scales covered with nails and bottle caps. Feray stood en garde ready to defer so Gede could have the last word. Crackling, Constant’s sparkled GRAN BRIGITTE pushed them aside. She had something to say. Recalling Secretary of State William Jennings Bryan’s social limits, she eschewed her usual expletives and resorted to the colonizer’s tongue,

They were still learning just how to sear flesh

when WE had already MASTERED

the WAVES of the ATLANTIC." ♦