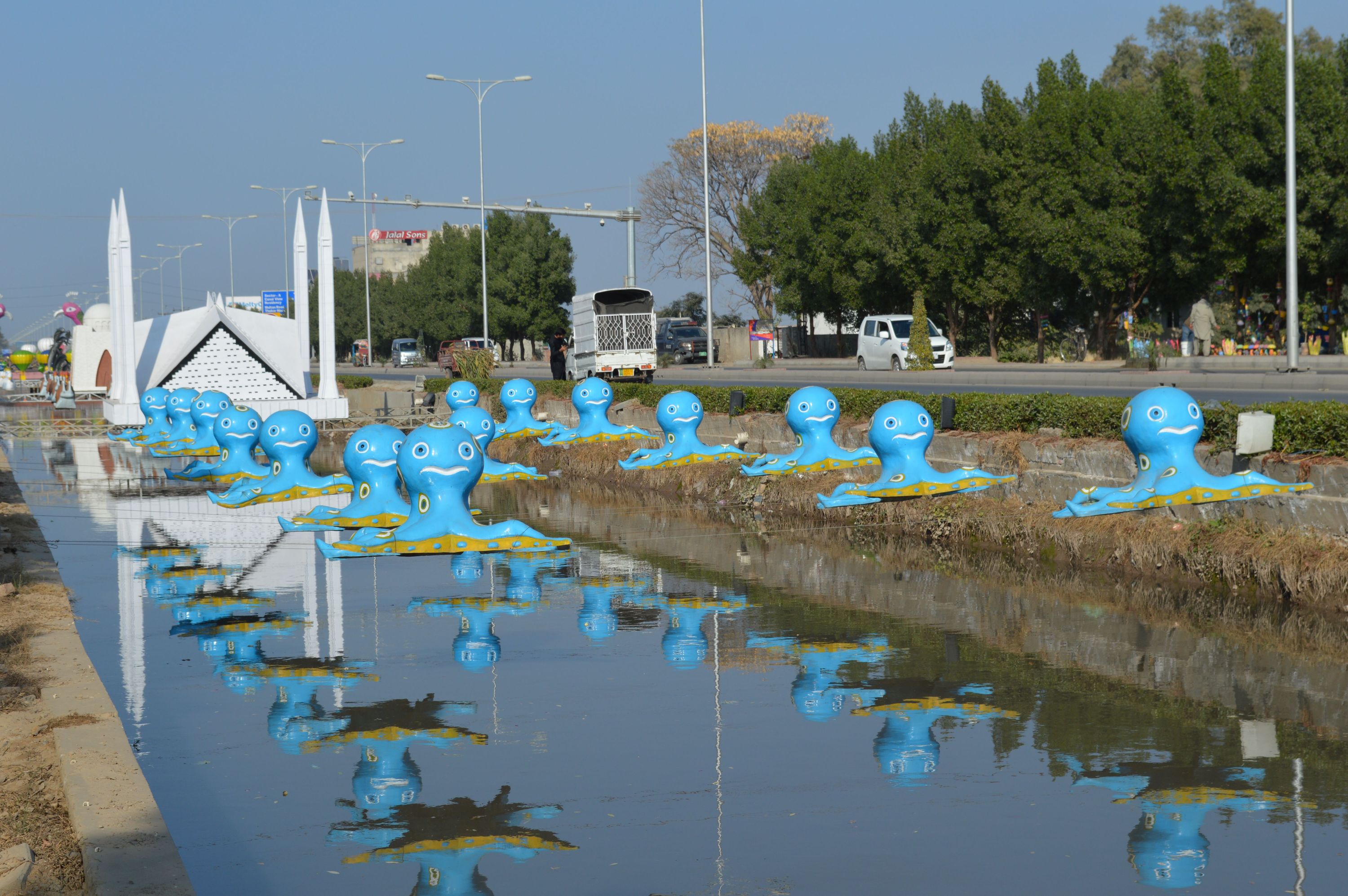 BY Umber Majeed
Umber Majeed (b. New York, 1989) is a multidisciplinary visual artist. She received her MFA from Parsons the New School for Design in 2016 and graduated from Beaconhouse National University in Lahore, Pakistan in 2013. Her writing, performance, and animation work engage with familial archives to explore Pakistani state, urban, and digital infrastructure through a feminist lens.

Umber Majeed’s Trans-Pakistan Zindabad (Long Live Trans-Pakistan) repurposes her uncle’s defunct Pakistani tourism company, Trans-Pakistan, Adventure, as a subversive critique of the country’s internalization of Western ideals and its heteronormative power structures. Dissolved in 2005, Trans-Pakistan, Adventure catered to Western tourists before the industry was decimated due to the War on Terror. Majeed sees in its capitulation to Western interests a corollary in Bahria Town, the name of several private, planned housing developments throughout the country. Its Lahore variant recreates Western monuments like the Eiffel Tower and Trafalgar Square—only they’re cloaked in a pervasive, Islamic security apparatus. At the crux of Trans-Pakistan Zindabad (Long Live Trans-Pakistan) is the question of how this built environment can be reimagined as a speculative, almost poetic space for othering prevailing logics around race, gender, sexuality, and capital.

Trans-Pakistan, Adventure services was founded and operated by Haroon Pirzada in the early 1990s. Its offices were based in Islamabad, Pakistan, but tours were offered throughout the country. Pirzada primarily organized hiking and trekking through the mountainous northern areas and the desert south. 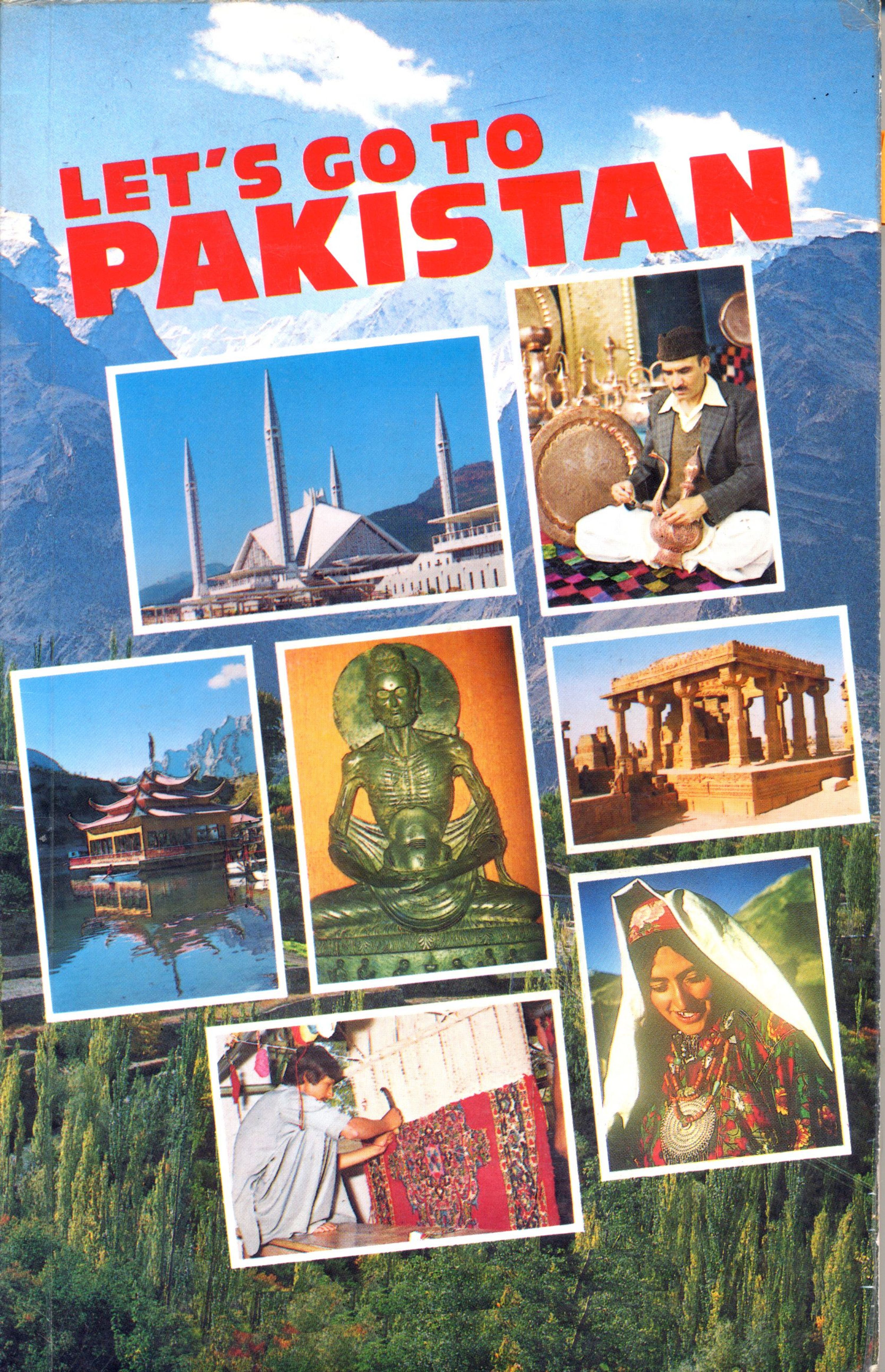 In 2005, Trans-Pakistan was dissolved due to lack of business; most of the clientele were foreign tourists, and the instability and security measures brought on by the War on Terror left Pakistan’s tourism industry and its economic viability in ruins. Within the dusty, discarded pamphlets of Trans-Pakistan, empty promises and national resentment was evident.

Trans-Pakistan Zindabad (Long Live Trans-Pakistan) is a research project drawing from a range of familial archives, digital technologies, and mechanisms of the Pakistani tourism industry in order to investigate current real estate developments in Lahore, Pakistan. Activities between and within these urban spaces have become heavily policed by state and neoliberal ventures. 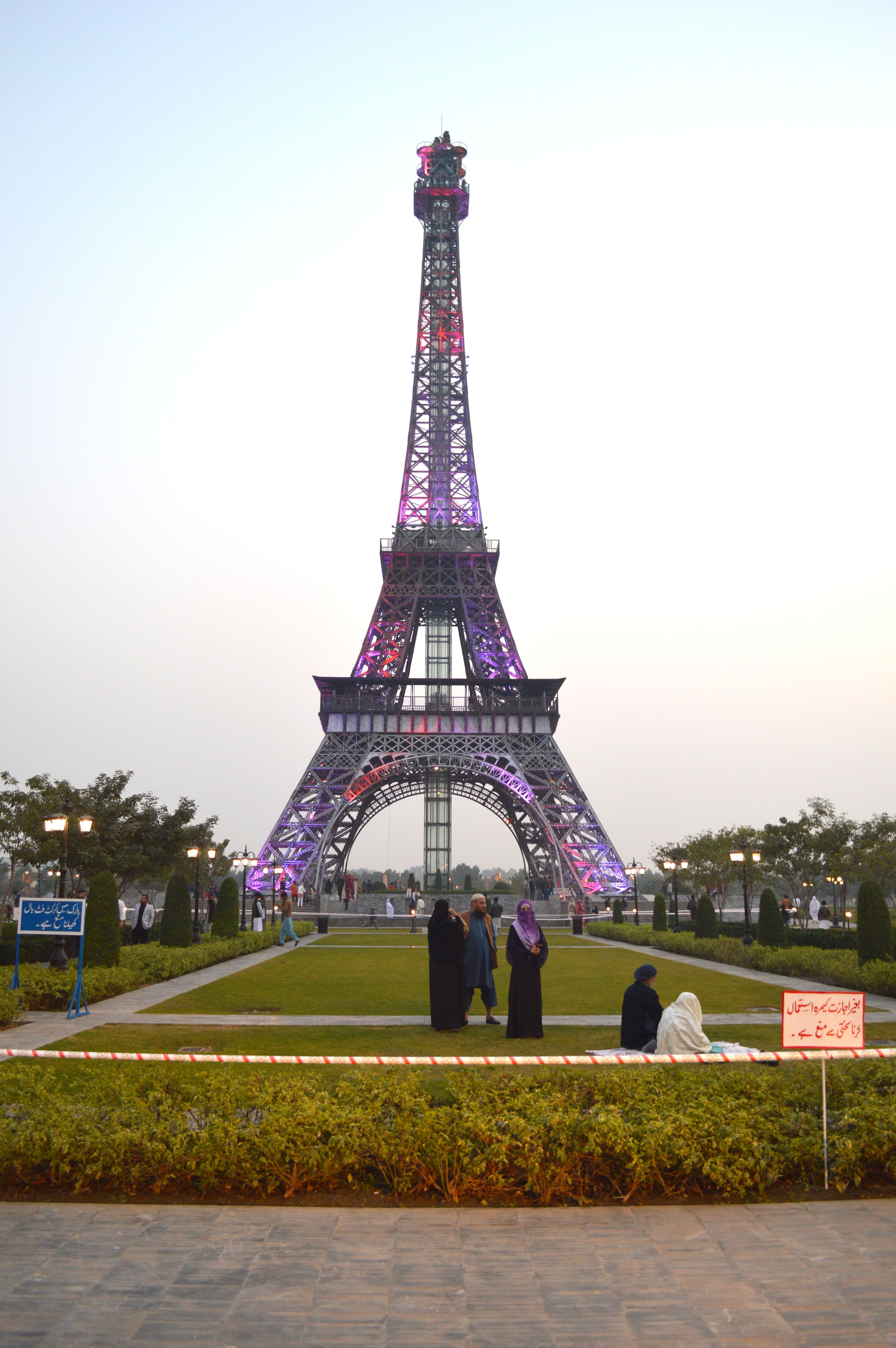 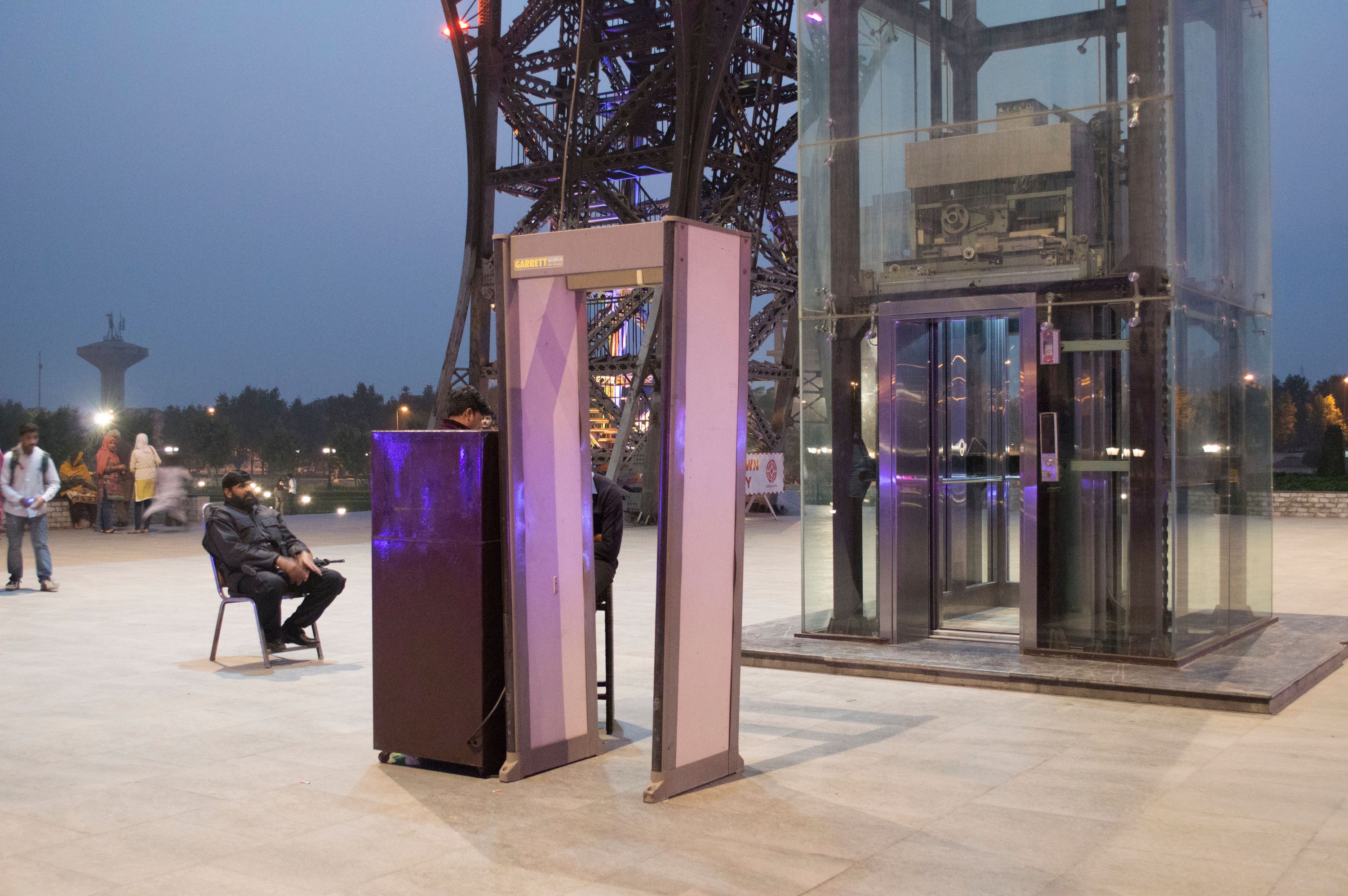 Bahria Town is a real-estate development company which has owned, developed, and managed gated properties across Pakistan since the early 2000s. Combining its various housing projects in major Pakistani metropolitan cities, the company has the capacity to house over a million upper-middle-class and high-income people. These communities have private security (and the ability to restrict access to non-residents) and their energy is independent from the national grid. Bahria Town Lahore offers simulations of modernist icons from other times: the Eiffel Tower, Trafalgar Square, and others, with the touch of Islamic ideals.

These large scale replicas of modernity are scaled to perform monumentally within the jurisdiction of the Bahria police department. Non-property-owning visitors are offered access, but with limitations, either as domestic laborers or visitors to the monuments. These semi-public spaces are also limited to families; single men are constantly questioned by the authorities. Those outside the heteronormative structure are suspect.

As Jack Halberstam outlines in The Queer Art of Failure (2011), nonconformist queer perspectives offer radical alternatives to notions of “success.” From SpongeBob SquarePants (1999-present) to Fantastic Mr. Fox (2009) to Finding Nemo (2003), Halberstam collects a set of narratives that weave together a politics of solidarity; of refusal; of unbecoming and unknowing; of the absurd, that all come back to failing differently, failing better, and failing collectively—to resist pressure to pursue heteronormative “achievements” in capitalism. 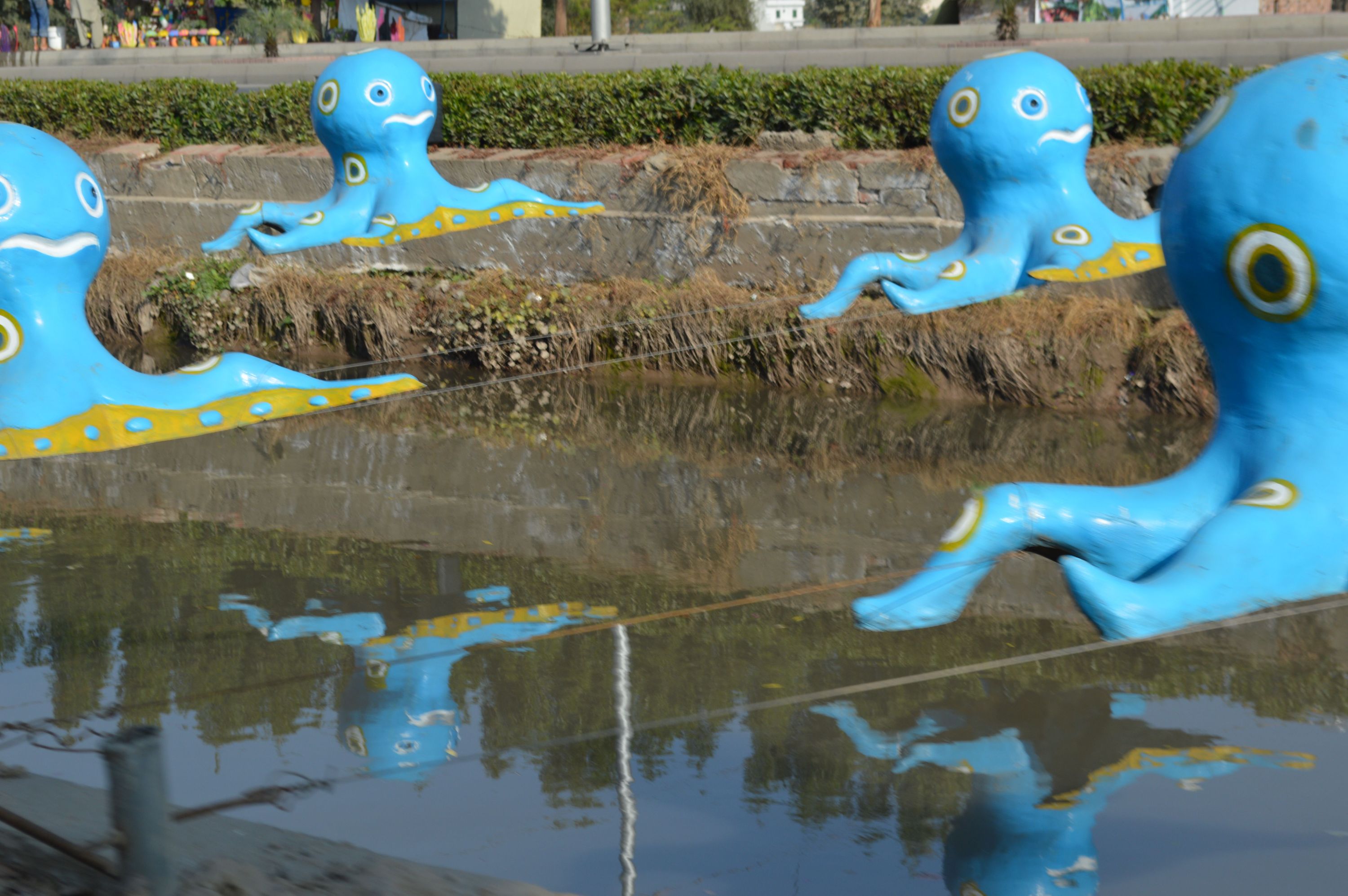 In the above images, fiberglass representations of octopuses just outside the housing community were created by local artisans. The imprints of their labor on the glossy, small scale pieces hover below the murky water of Bahria Town; its land was acquired through grabbing and corrupt means. Through virtual and augmented technologies as experienced through Zaameen.com (land.com), there is potential for a kind of refusal. 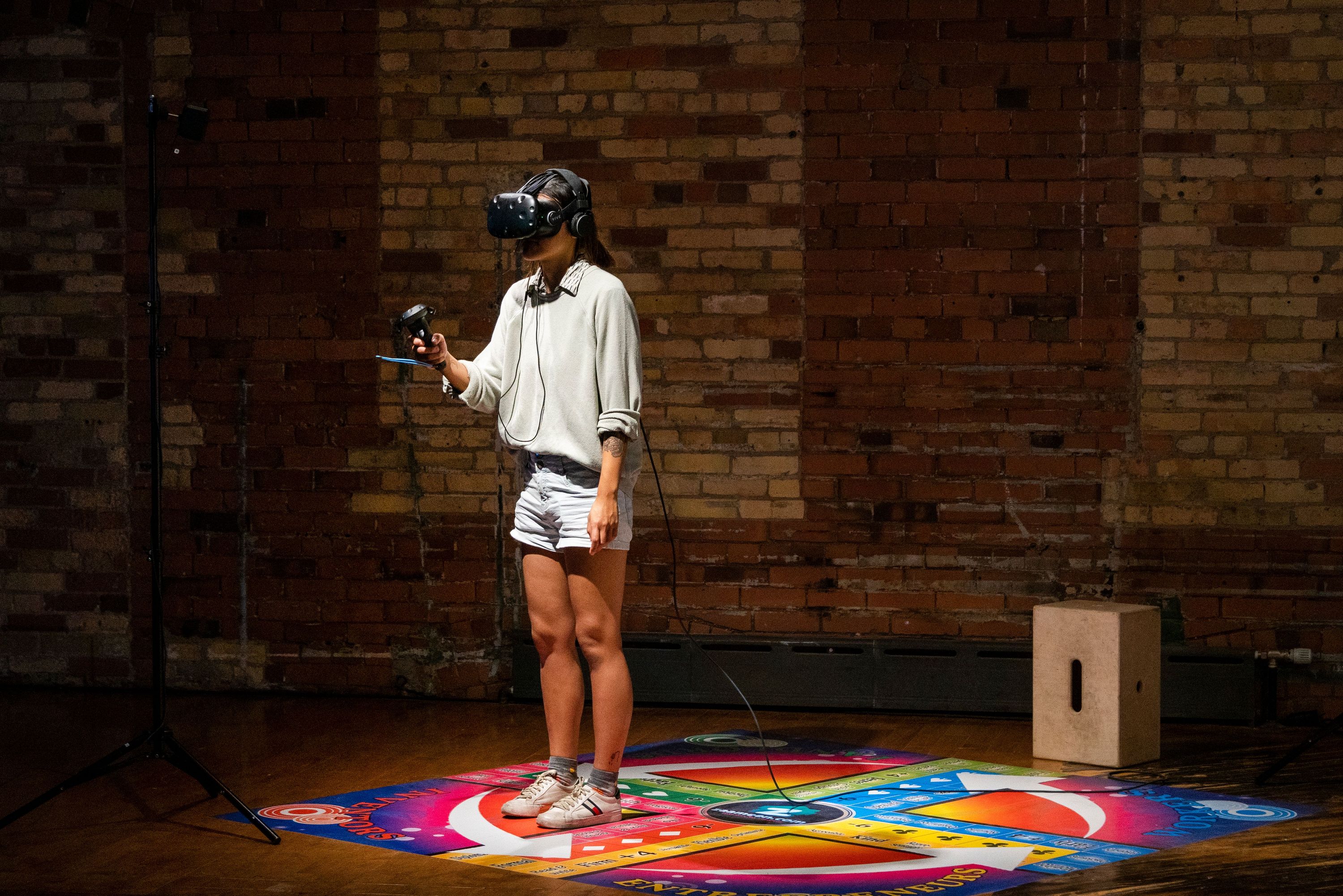 Installation documentation of Umber Majeed, Zaameen.com, 2019, four 16 in by 20 in works on paper and vinyl, single channel animation, 7 ft by 7 ft vinyl, Oculus headset and trackers, and computer system.