Tourmaline's film Salacia is a departure point for considering the interlocking forces of race, gender, and criminality in representations of sex work.
art
Tourmaline, Salacia, 2021. Film still.Courtesy of the artist and Chapter NY, New York
BY Ayanna Dozier
Ayanna Dozier (PhD) is a Brooklyn-based filmmaker, artist, and scholar. She is the author of Janet Jackson’s The Velvet Rope (2020) and a lecturer in the Department of Communication and Media Studies at Fordham University.

Recently, there has been a plethora of mainstream discourse on sex work produced by people who are not sex workers or are primarily cis white femmes. These works betray how surveillance targets, criminalizes, and reduces access for Black femmes in the field. When laws are rapidly being passed in which Black women will continue to be affected disproportionately by new means of policing, representation becomes critical. And as such, alternative media and the arts are vital for the production and distribution of counter-visual representations of sex work.

In the 2019 Brooklyn Museum exhibition “Nobody Promised You Tomorrow: Art 50 Years After Stonewall,” artist and filmmaker Tourmaline debuted Salacia, an experimental, six-minute narrative short on the life of nineteenth century sex worker Mary Jones (played by Rowin Amone). Salacia casts a historical lens on the policing and surveillance of sex workers, paying close attention to how Black trans women, like Jones, were interpolated by systems of criminalization.

Salacia follows Jones through her life, which includes a fictive settlement in the preposterous Black community of Seneca Village. Within this space, Tourmaline fabulates her vision of Seneca Village that constructs new truths alongside the limited available research on the community. Tourmaline has described her use of fabulation as a direct citation from scholar Saidiya Hartman’s essay “Venus in Two Acts.” In the essay, Hartman asserts that memory work on the enslaved dead must attend to the wholeness of their lives—the aspects that exceed their entrapment, or what an official record can enclose. Salacia transports Jones to a settlement in Seneca Village (a predominantly Black neighborhood in what we call Central Park today), visualizing its queer and transgender lives to their fullness. We see Jones in communion with other kinfolk, as well as engaged in mundane work-related tasks, which includes the occasional sex act to white patrons. Tourmaline casts Jones in a fugitive state of constantly evading capture and surveillance from the authorities and respectable Black property owners before she is imprisoned on Governors Island. While Jones is in captivity, we see her conjure a spell that emancipates her body, and the film as well. The archival footage of activist and community organizer Sylvia Rivera—taken during her occupation of one of the abandoned piers in solidarity with queer and transgender homeless people—comes to the fore. Salacia is a template for the alternative and informal tactics deployed by transwomen of color to not only survive but elude entrapment.

The archives of sex workers have and continue to be comprised by official law enforcement records, where the dehumanization of their subjects is mandated for their inclusion.

While photographs or other forms of documentation for this historical figure are not available, what survives of Jones are the police description and lithograph where she is misgendered, deemed amoral and monstrous (“the Man-Monster,” as a description put it). The archives of sex workers have and continue to be comprised by official law enforcement records, where the dehumanization of their subjects is mandated for their inclusion.

In her robust scholarship on nineteenth century runaway slave ads, art historian Charmaine Nelson describes the criminal “wanted” ads as both a part of a visualization and surveillance economy and a category of Black fugitive portraiture. As Nelson argues, Jones’s lithograph, created by H.R. Robinson after she was charged with grand larceny in 1836, presents a critical opportunity for audiences to see beyond the state’s entrapment of her body as depicted. Nelson’s work enables us to look for all the sophisticated resources of dress, performance, and speech deployed by Jones within that system of surveillance to represent her personhood. Salacia further builds a visual counter-archive for Jones, and by extension other Black femme sex workers who exceed the legibility of surveillance. Salacia materializes systems of surveillance in relation to sex industries and critically, the precarious thread of visibility that both elides and encloses sex workers. 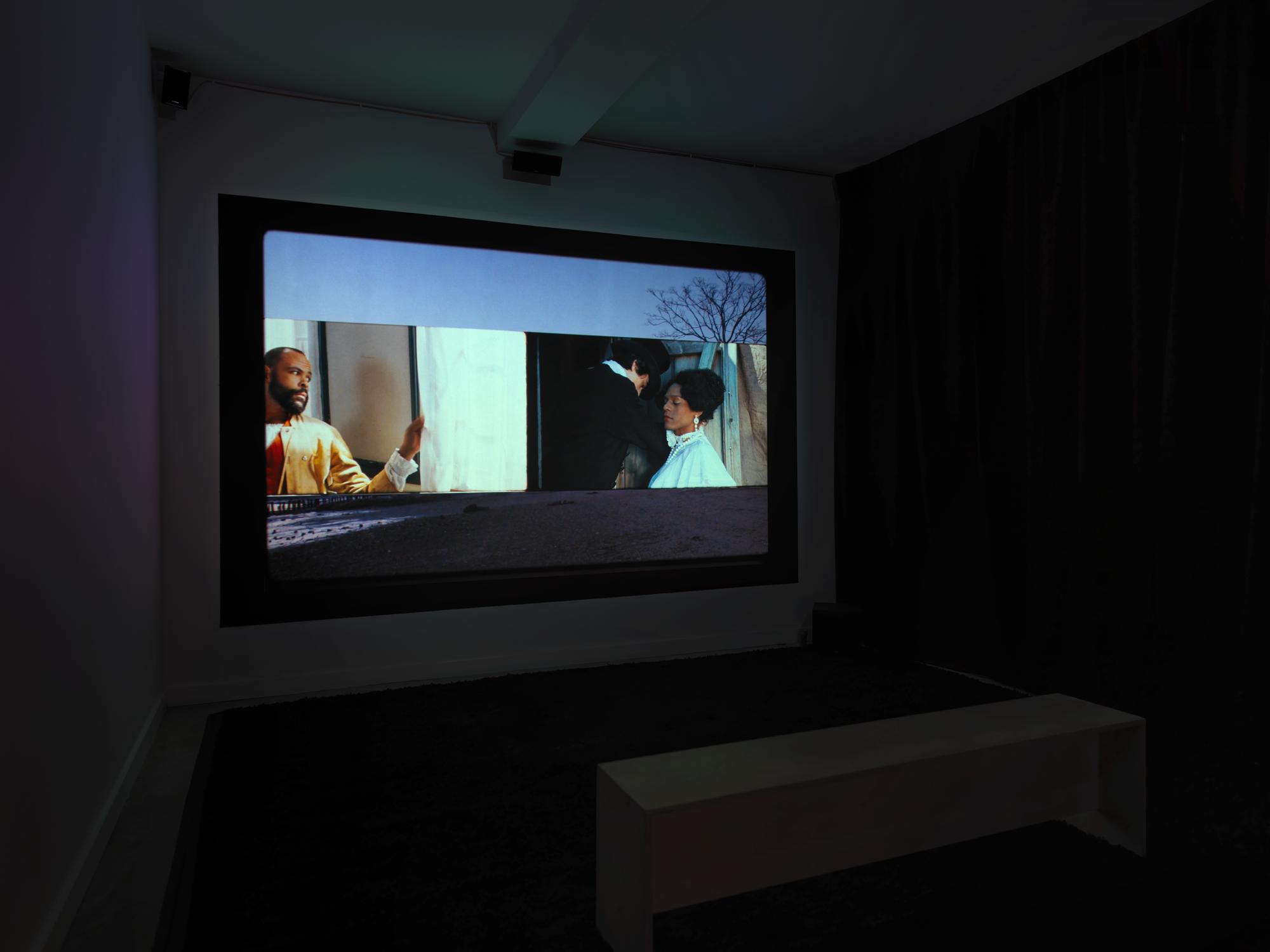 Historically and currently, representations of sex industries are not produced by sex workers. If we turn our attention to Hollywood, we see that sex work is used as a transformative character arc for a downtrodden woman, usually cisgender, heterosexual, and white. Films like Pretty Woman (1990), Moulin Rouge (2001), and The Wrestler (2008), depict “hookers with a heart of gold” who simply need a man’s love to be “saved” out of the industry. Although a film like Tangerine (2015) narrowly disrupts this trope with its focus on Black trans sex workers (and casting actual sex workers like Ana Foxxx as supporting characters), the script, direction, and production were made by men with no sex industry experience. These representations paint a dissatisfying tapestry of sex industries. With few sex workers able to seize the means of their own representation, these popular images perpetuate harmful ideology around sex work as inherently dangerous and morally damaging.

In an essay for Lux, Emily Janakiram argues that it is paramount for a wider audience to dismantle the ideology of sex work as “risky business”; such a dismantling is a matter of abolition. As Salacia makes evident, when we approach the monumental task of decriminalizing sex work, we are confronted with intersecting systems of marginalization. In our digitally mediated society, the surveillance of sex workers is an alarming revelation of the extent of surveillance on everyone. Take, for instance, the recent OnlyFans Mastercard Visa ban, instigated by Christian fundamentalists to prohibit how sex workers receive payment. This ban further revealed that these platforms were using spyware that monitored not just the content on their sites but their social media profiles.

These platforms often justify surveillance to assess “risk.” But risk here, as journalist Melissa Gira Grant expertly describes in Salon, is subjective and largely pulled from the legal language around policing the solicitation of sex work. Sex work is embedded in a moral discourse that incorrectly conflates it with sex trafficking and child abuse. The criminalization of sex work, and the removal of access to vital services like digital banking and payment processors, effectively turns sex workers into economic and social pariahs. Thus, rather than attend to actual systems that perpetuate sex trafficking and child harm (police departments being key), these laws pinpoint sex workers as “enabler” to systems of abuse. This carceral approach does not attend to the problems that sex workers are blamed for perpetuating and in fact, enables trafficking to grow through obfuscation. 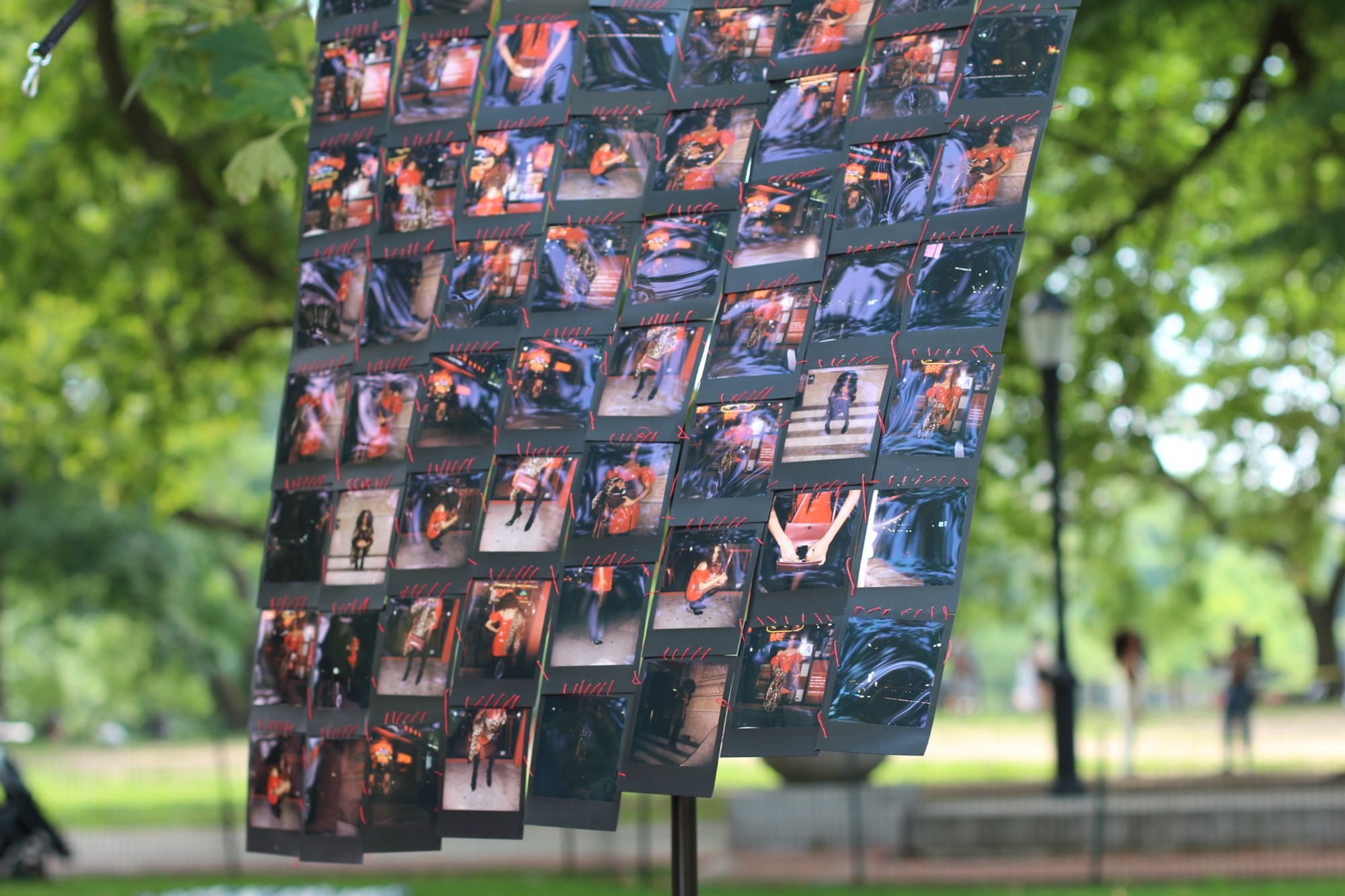 Solicitation of Crimes Against Nature, Ayanna Dozier, Polaroid quilt, 2021.Courtesy of the artist

If the anti-emancipatory gaze of surveillance permeates images of sex work, the task then, is to search for or create counter-visual images. Drawing upon my own experience in various sex industries, my scholarly and artistic practice seeks to uncover how systems intersect to target sex workers of color, specifically Black femmes. In Solicitations of Crimes Against Nature (2021), I depict myself in a series of Polaroids to dramatize the gaze of what an arresting officer may consider as visual evidence of a sex worker (or “nightwalker,” as termed by many laws). Referencing the five states (California, Denver, Massachusetts, New York, and Texas) with laws that prohibit the solicitation of sex, the Polaroid quilt evokes the ambiguous zone between someone soliciting sexual services and a woman walking alone at night. Any one of the images could be interpreted as a femme having a night out, with personal belongings such as a phone, contraceptives, or abortive pills. However, these objects could be used against me. In fact, since many laws punish the solicitation rather than the act and exchange of services, one simply only has to look like they are selling sex to be arrested.

But what does looking like reveal in a system where Black people are disproportionately deemed to possess the features of the suspect police are always seeking? The writer bell hooks elucidates this system of interpolation through a personal anecdote: during her stays at various hotels for academic conferences, hooks recalls having the police routinely called on her because she looked like she was soliciting sex. What hooks’s anecdote further uncovers is that traveling freely as a Black femme is grounds for suspicion of illicit activity. The state’s intimate abuse of Black femmes can be parroted by any surveying eye. Due to this, the absence of Black femmes occupying space in the narration, response, and representation of sex work should be considered a glaring omission.

Tourmaline’s archival resurrection of the lives of Black trans sex workers like Mary Jones, Egyptt LaBeija in Atlantic is a Sea of Bones (2017) or even in her ongoing redressing of Marsha P. Johnson across works but specifically, Happy Birthday, Marsha! (2018) co-directed with Sasha Wortzel, uses the surveilling gaze as a starting point to ambitiously transform their representation through experimental and bold images that exceed what any record can legibly capture. Her work is a model for redirecting our attention to more thoroughly understanding surveillance. Through the artist’s creative actions, we learn tools of resistance that steer us closer to abolition. ♦