Making sculpture humdrum and turning the humdrum into sculpture, Charles Harlan’s objects question the very value of an artwork.
art 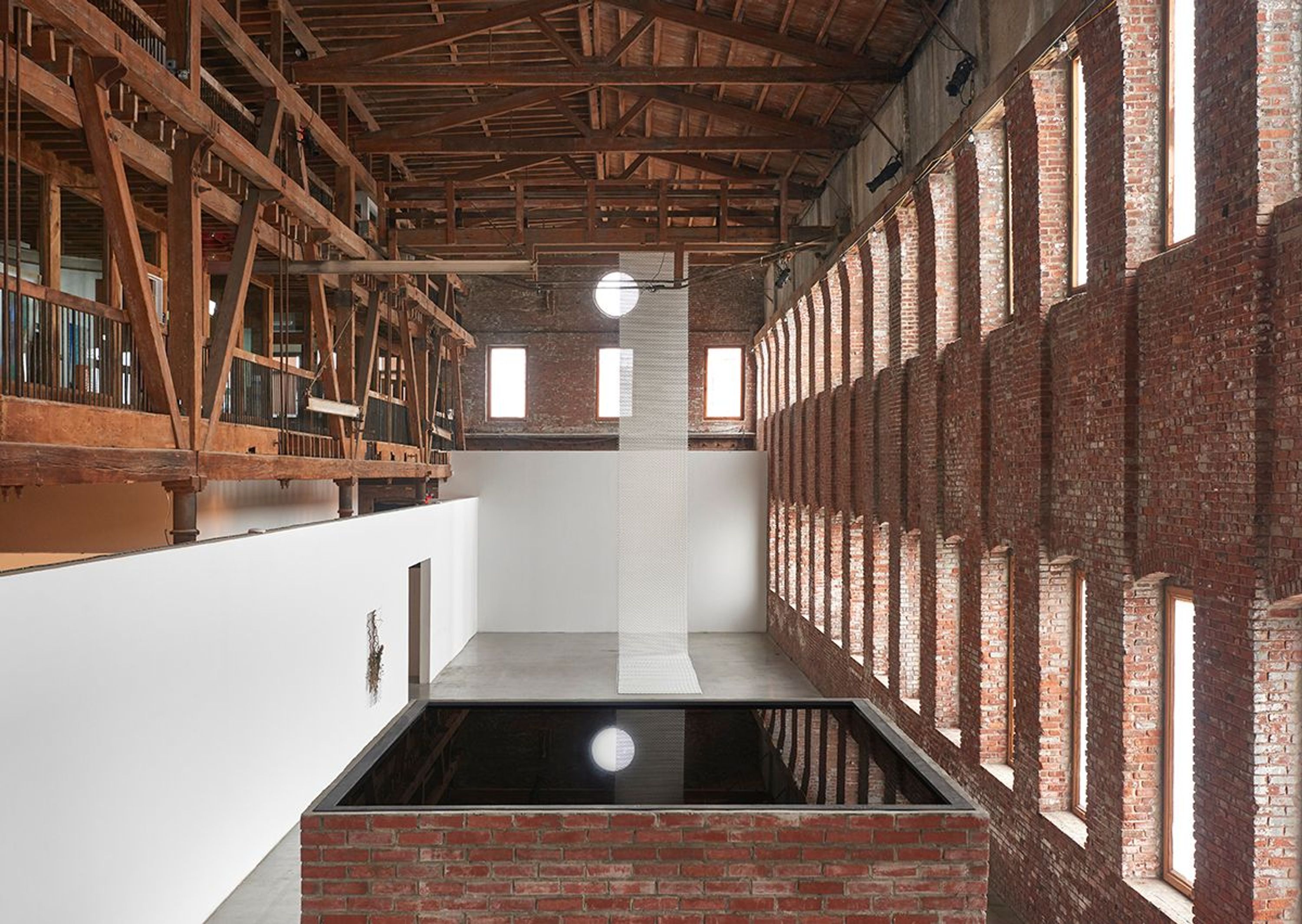 Charles Harlan’s latest exhibition at JTT New York, Celtic Cross, provides a convenient excuse to unearth this essay of mine from 2016, which I wrote on the occasion of his Pioneer Works solo show Flood. It was the first exhibition of that scale I had ever organized—and my first at Pioneer Works—so I look back on it fondly; I can still remember the installers chain smoking while feverishly laying bricks for the central work, then pressure washing it in massive plumes of water. Watching all of this I thought, “Holy shit.” And I must say, I do think “Strange Utility,” which is featured in the very well-designed and limited run exhibition catalogue, has held up remarkably well over time, which isn’t always the case. I’m happy the text is now online for the first time, in the “pages” of The Broadcast. A suburban Georgia boy like myself, Charles’ preferred medium is the stuff suburban dreams are made of: ladders, roofing shingles, bathroom sinks, and the like. Turned into sculpture, they gain something uncanny while never losing sight of their humble origins.

It wouldn’t be an insult to say Charles Harlan’s work is Home Depot Chic, or post-Lowe’s, or Redneck Minimalist;

he was, after all, practically raised in a hardware store, in Smyrna, Georgia. His Mom still runs the place, Vickery, Do-It-Best Hardware, where she’s been working all her life, and where the artist worked summers from middle school through the first year of college. Subsequently, he feels very at home in hardware stores—seemingly a miracle to some, who are hopeless. It takes the manual-labor-disinclined an hour to find the roofing section. Everything is so big, and there are so many things. It’s like dropping the average New Yorker on a desert island, where they’d die before they even got there. Where is north? What is food, when it’s not fetched through your phone? There are the cosmopolitan Georgia boys, like myself, and then there’s Harlan, who’s a Georgia Georgia boy. He owns a truck and likes to fish, in the woods. I haven’t seen a live fish in like 15 years. He wears a hunting hat and a camouflage jacket. Some may call these things affectations, but I’d call it looking the part and being the part.

While the work in Flood doesn’t exactly come from Lowe’s (it came from local building suppliers), it might as well have. It’s like a Lowe’s turned inside out and made pretty, use value becoming aesthetic value—or as Walter Benjamin would put it, exhibition value—all

thanks to institutional decree. While Pioneer Works isn’t exactly a white box, but a brick box, it’s still a box. And the object—no matter how humble—isn’t merely a pig with lipstick on it, it’s something else entirely: a really special pig—an artwork, abstract and near-autonomous. Auratic, if you will. This is what makes Harlan’s work—and the work of others in his appropriationist ilk, like Gedi Sibony or Darren Bader—so interesting: they’re constantly pushing the limits of what can pass for aesthetic, or what can pass for exceptional or different-from-life, when it’s so of-life. 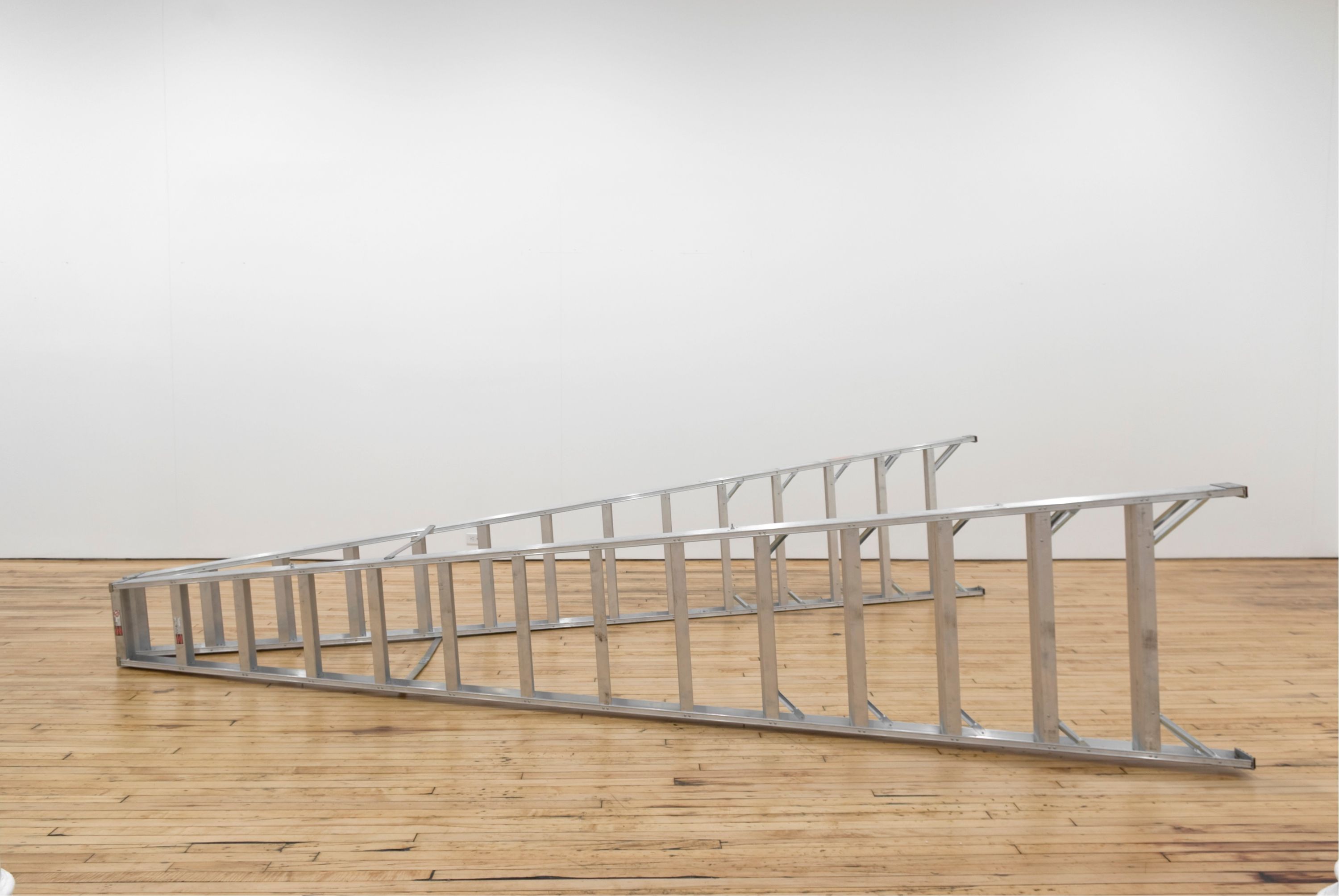 For Sibony, it could be some vertical blinds seemingly thrown on the floor (The Middle of the World, 2008). For Bader, it could be a grapefruit on the floor (I’d cite the title if Darren titled anything). For Charles, it’s a ladder on its side (Ladder, 2010), or a piece of fencing a tree managed to wrap itself around and into, cut out and put on a wall (Tree, 2016). Boom!—it’s in the space of a painting, even holding its shape, which was so important for modernists (Michael Fried: “Roughly, the success or failure of a given painting has come to depend on its ability to hold or stamp itself out or compel conviction as shape.”).

Ditto for Harlan’s Counter (2012), for which he simply hung a factory-made, marble sink countertop on a wall. I have one above my bed. It doesn’t read as a countertop, it reads as an abstract composition of a large circle and three holes, i.e. not something you’d wash your hands with, but rather ponder shape, color, and pattern.

In this way, Harlan’s work is differentiated from classic Duchamp, even though it’s indebted to his Readymades, which did so much to underline how arbitrary the designation “art” can be. They were pretty much left as-is, even when “assisted.” They could be used, if the museum let you. Harlan’s work, through simple changes in scale and orientation, renders such quotidian things alien and not very recognizable or useful at all—stress on useful. Use value and utility are key questions here, with Harlan zooming in on the “confusion between a possibly useful object and an art object,” as he noted in an interview. “I feel like that's the question of the pyramids, if they are art or not. And it is the question of the Readymade. It creates a kind of uncanny feeling when encountered in the street or at an art show.” 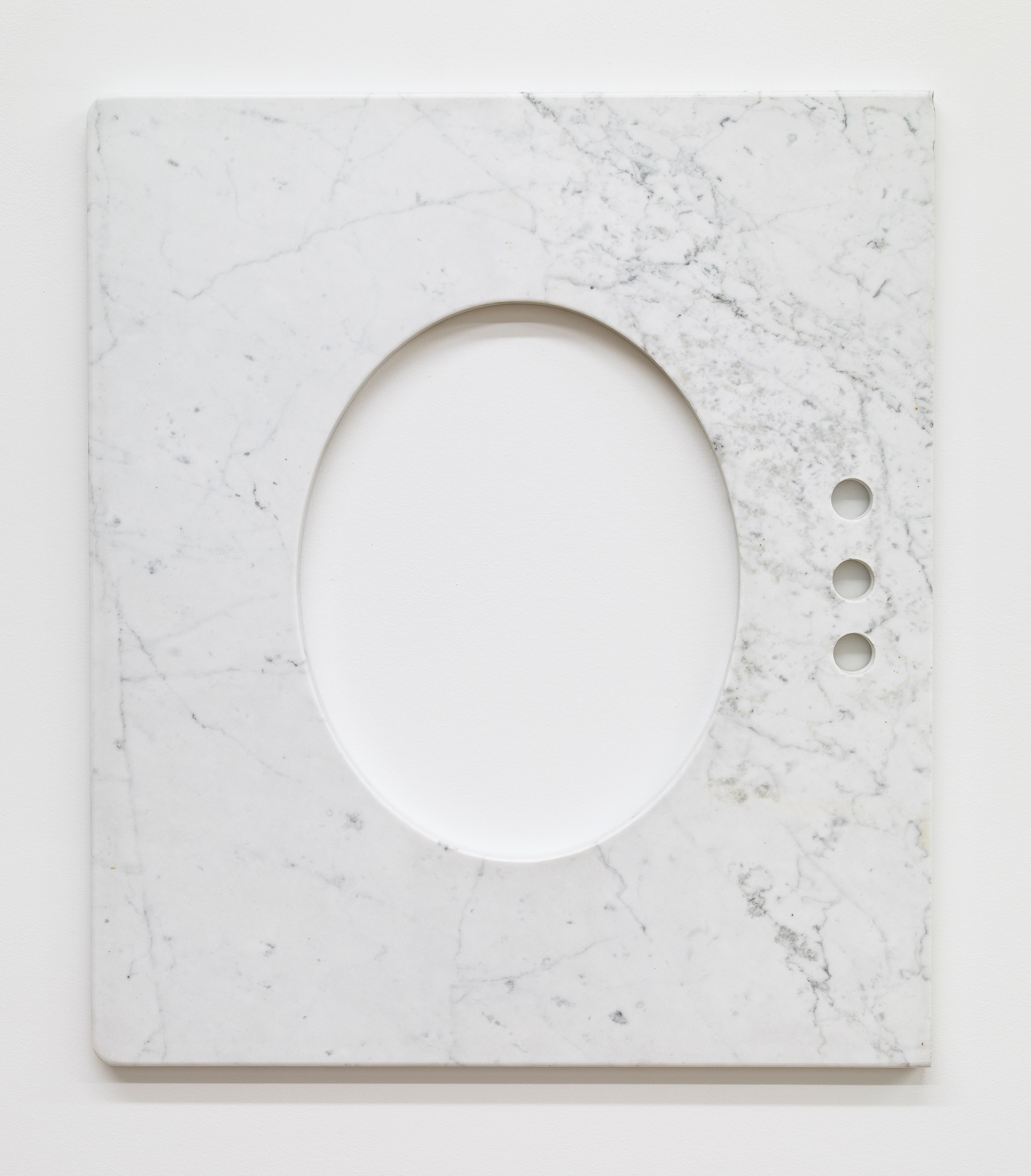 It’s unsurprising perhaps that Harlan would mention the pyramids in the same breath as the Readymade, considering neolithic and ancient monuments and burial architecture have become such a touchstone for Harlan’s practice, ever since visiting the Giza pyramid complex in El Giza, Egypt, in December 2010, just before the Arab Spring uprisings. The complex is devoted to fourth dynasty Egyptian pharaoh Khufu and his wives and other associates. The Great Pyramid in particular was built as a tomb for the ruler, and after its completion around 2560 BC, was the tallest manmade structure in the world for 3,800 years. Reaching 481 feet in height and 756 feet wide at its base,

it towers over the surrounding desert and the polluted din of nearby Cairo. It is, in effect, like something from outer space, from a nearly inconceivable place and time.

It also, coincidentally, was never conclusively proven to harbor a body, which confuses its intended use value. That doesn’t diminish the pyramid’s incredible symbolic and aesthetic expense though. The shape of Egyptian pyramids was meant to symbolize the primordial mound the Earth was born from; the first examples were stepped “mastabas,” or flat-roofed tombs, that were to function as stairways for the dead to reach the heavens. The latter examples, like at Giza, were smoothed over to represent descending sunrays. This was done literally with reflective white limestone, such that, from afar, they were brilliant structures to behold,

and gives credence to contemporary archeologist Richard Bradley’s claim—which Harlan often references—that to frame ancient architecture solely in terms of utility is sort of missing the point; it under-estimates ancient civilization’s capacity for aesthetic prowess and abstract thought. Utility or not, these structures can be incredible—again, “uncanny”—things to behold. 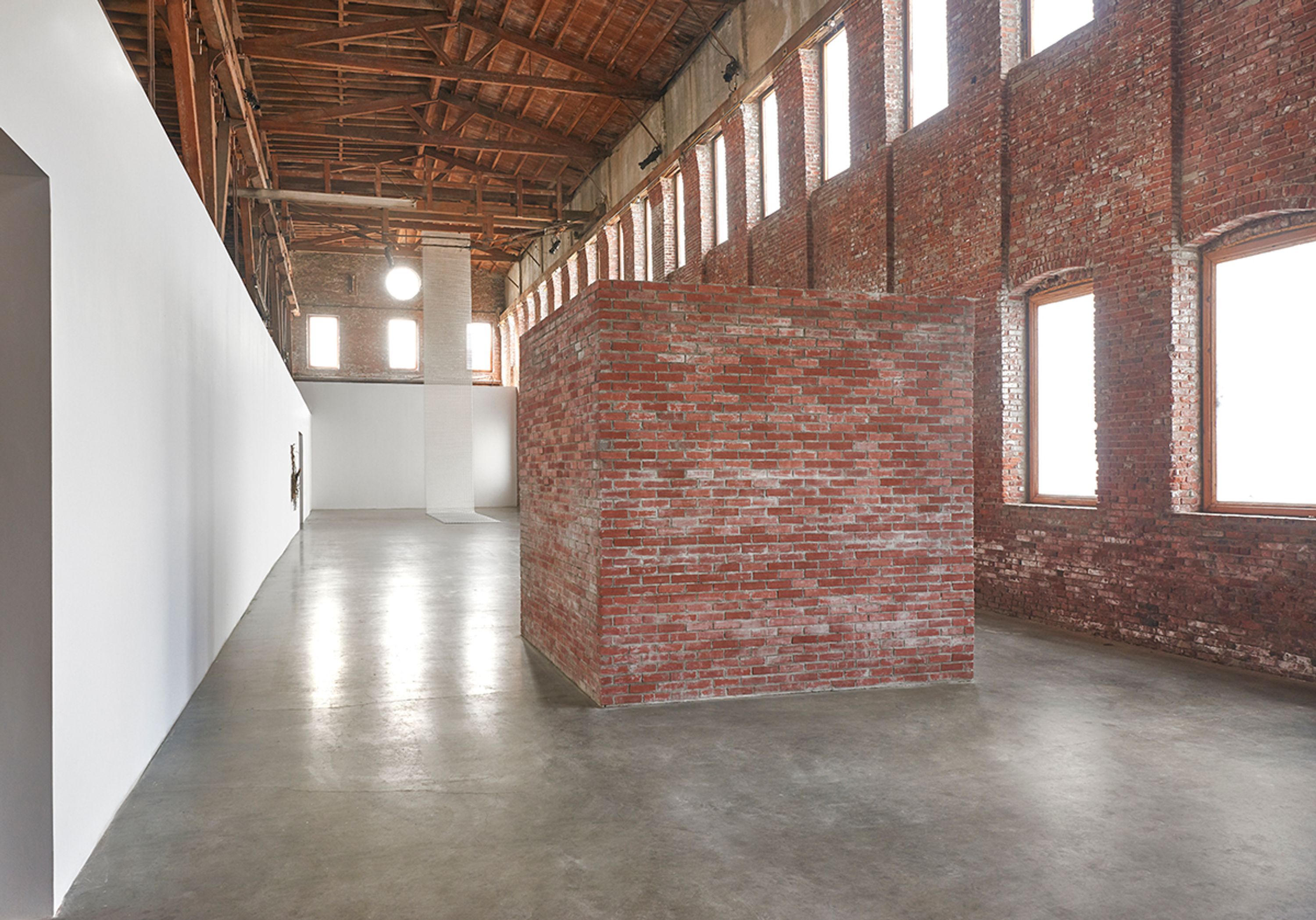 This elliptically brings us back to Flood, which makes indecipherable monuments-to-nothing out of the clutter that populates suburban America. The joke is on us—and at the expense of potentially overplaying its effects—it’s both terrifying and sublime. With Water (all works in Flood 2016), the visitor is faced with a four-sided, impenetrable wall out of the most standard of bricks—generic red, no less. They were chosen to be in distinct counterpoint to Pioneer Works’ masonry, which is old and full of character. If Water were a tomb for something, surely it would be collective cultural creativity and good taste; this is the stuff Levittown was made of: cookie cutter housing and custom nothing, the housing tracts Dan Graham made fun of in Homes for America (1966-1967), by taking countless pictures of their endless and unoriginal permutations. To extend the analogy even further, take away a wall from Water and it could be the beginnings of a massive Sol Lewitt Serial Project, if it were brick walls and not white lattice-like cubes, and if Lewitt was a general contractor rather than a sculptor—the big caveat being the two are inextricable; even MoMA is made of 2x4’s (or the metal kind) and plywood. Those things may be mass-produced and standardized, but we all rely on these building materials to live and work in. 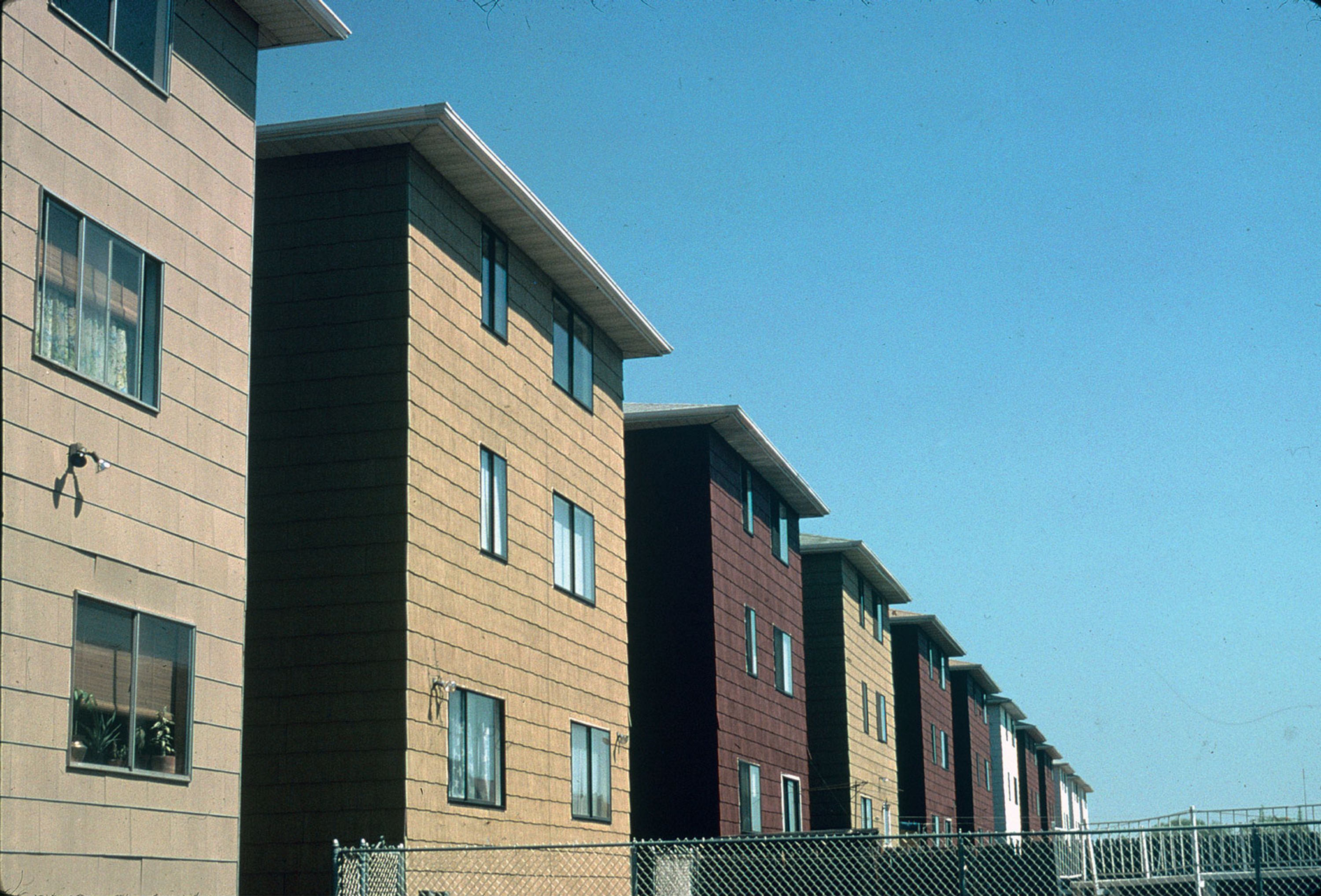 This is not to say that Water isn’t a lovely object, because it is. It requires an extended Merleau-Ponty Approach, where not only do you have to actively move around it to get a sense of its scale in relation to the body (it’s 10 ft. by 10 ft., by 10 ft. high), you also have to go upstairs, a site-specific consideration of the space, which has two levels of mezzanines. Viewed from above, one can see a still pool of water at its apex. Struck by sunlight, it resembles something ancient and timeless. Even then though, it might reference an infinity pool too, the kind endlessly marketed by Caribbean beach resorts. The thing that’s nice about Water—and Harlan’s work in general—is that he’s having his cake and greedily eating it too: he simultaneously elevates these rather hum-drum industrial objects to the realm of sculpture, and knocks the realm of sculpture down to its hum-drum variants. High and low are thus in constant tension. 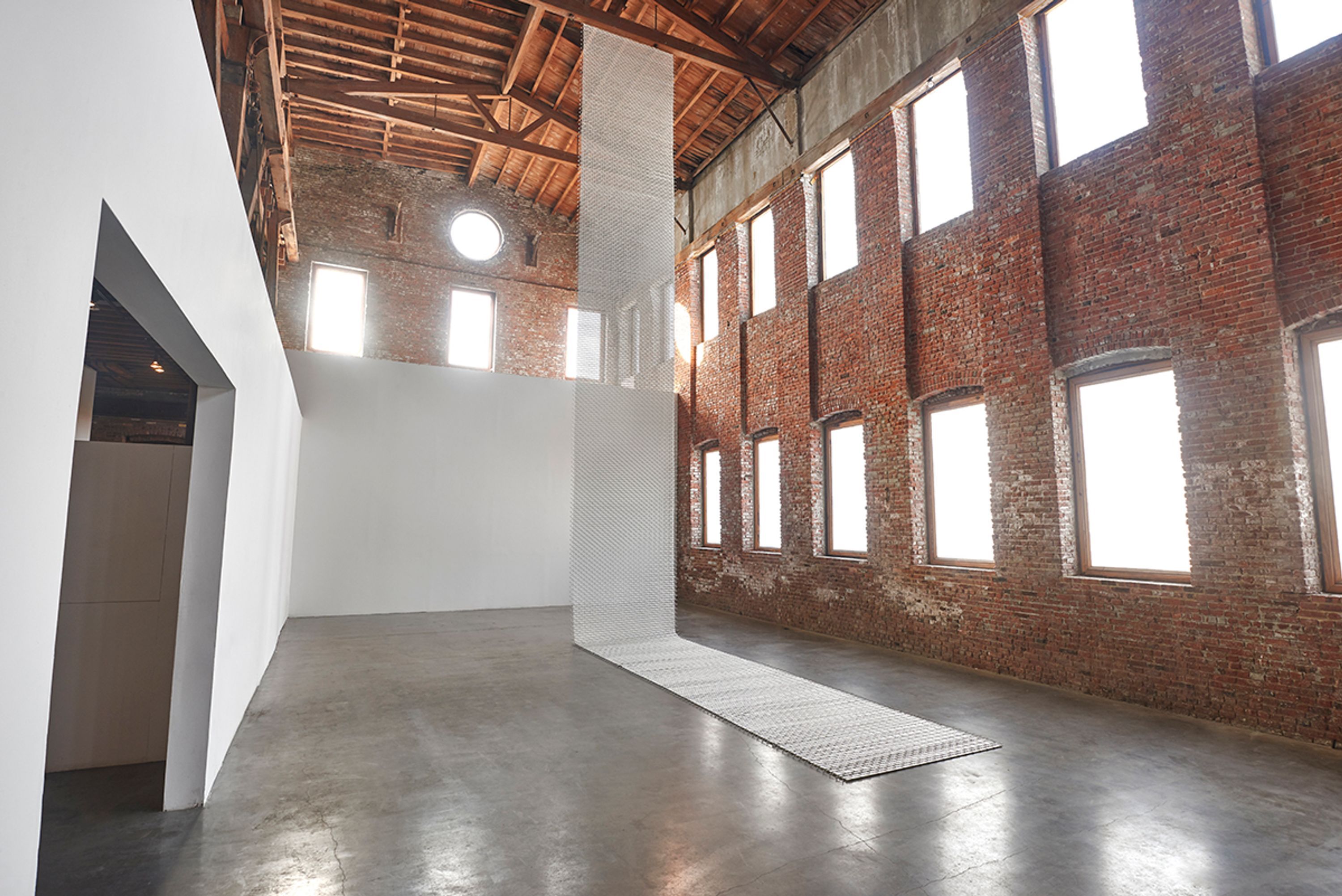 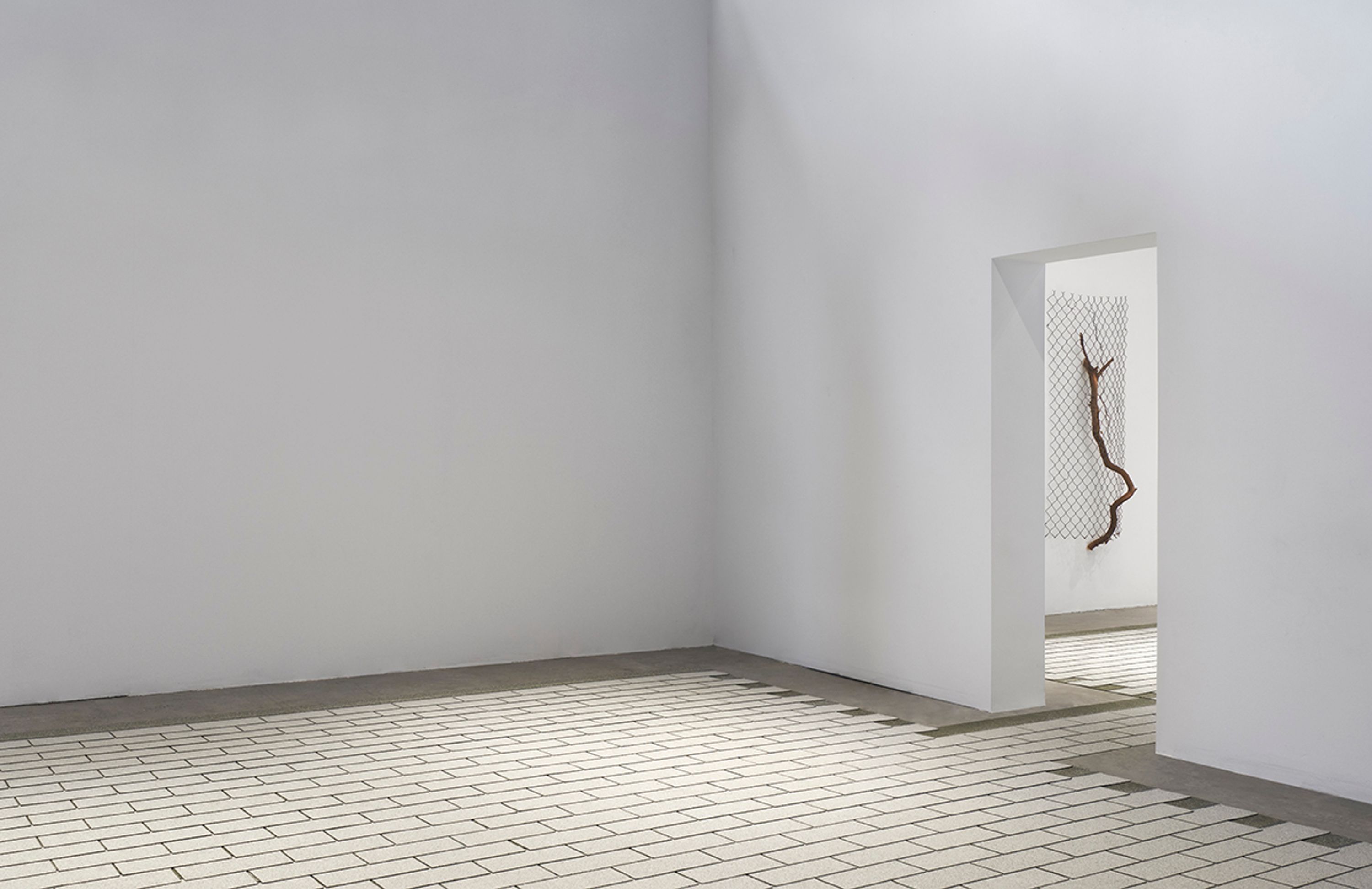 The other works in Flood operate with a similar dichotomy. Sharing the main space with Water is Fence, a 6 ft.-wide chain link fence hanging from the ceiling. It falls about 33 ft. then continues along the floor. Privacy slats have been inserted into the steel threads, such that the fence becomes part opaque, part transparent. Seen from afar, it looks like an elegant, light-filtering fabric scrim. Seen up close, it would be familiar to many as the kind of fence the family dog was kept in; it’s geometric minimalism, vis-à-vis the suburban backyard. Adjacent to both works are two Tree pieces, which Harlan cut—renegade style—from industrial lots in St. Louis. Here, they’re pseudo stand-ins for painting, but the joke’s on painting. As Martin Kippenberger famously claimed, “Simply to hang a painting on the wall and say that it’s art is dreadful. The whole network is important. Even spaghettini… When you say art, then everything possible belongs to it.”

Rounding things out are two large rooms whose floors have been tiled with cheap, readily available asphalt roofing tile, Shingles. They’re of the floor and not the floor. Those wanting to enter Pioneer Works’ main space from the side galleries will have to walk on them to get through. Over time, the tiles will get dirty. Literally bringing something up high low, Shingles also looks, to Harlan, like towns look from above when flooded—during Hurricane Katrina, much of what could be seen above water was roofing shingles, a kind of monotone grey. Shingles partly gives the exhibition its title, as does Water, whose pool references ideas of container and contained—or perhaps what ultimately can’t be, like water kept at bay by a riverbank. This might connote Hurricane Sandy, when the waterfront in Red Hook—literally a hundred feet or so from Pioneer Works, which suffered considerable flooding—filled the space with 5ft. of water. Or more interestingly, Water might reflect on the idea of the Biblical flood in Genesis, which meant to erase mankind’s immorality by bringing about a reversal of creation.

Most religions view this Biblical flood event as allegorical, though some fundamentalists, particularly in Harlan’s Deep South, see it as truth (the Institute for Creation Research is based in Dallas, Apologetics Press in Montgomery, Alabama). Again, we see the artist’s geographic origin make another appearance, inflecting the whole affair with a religious undertone befitting the pyramids—and perhaps, in a way, minimalism too.