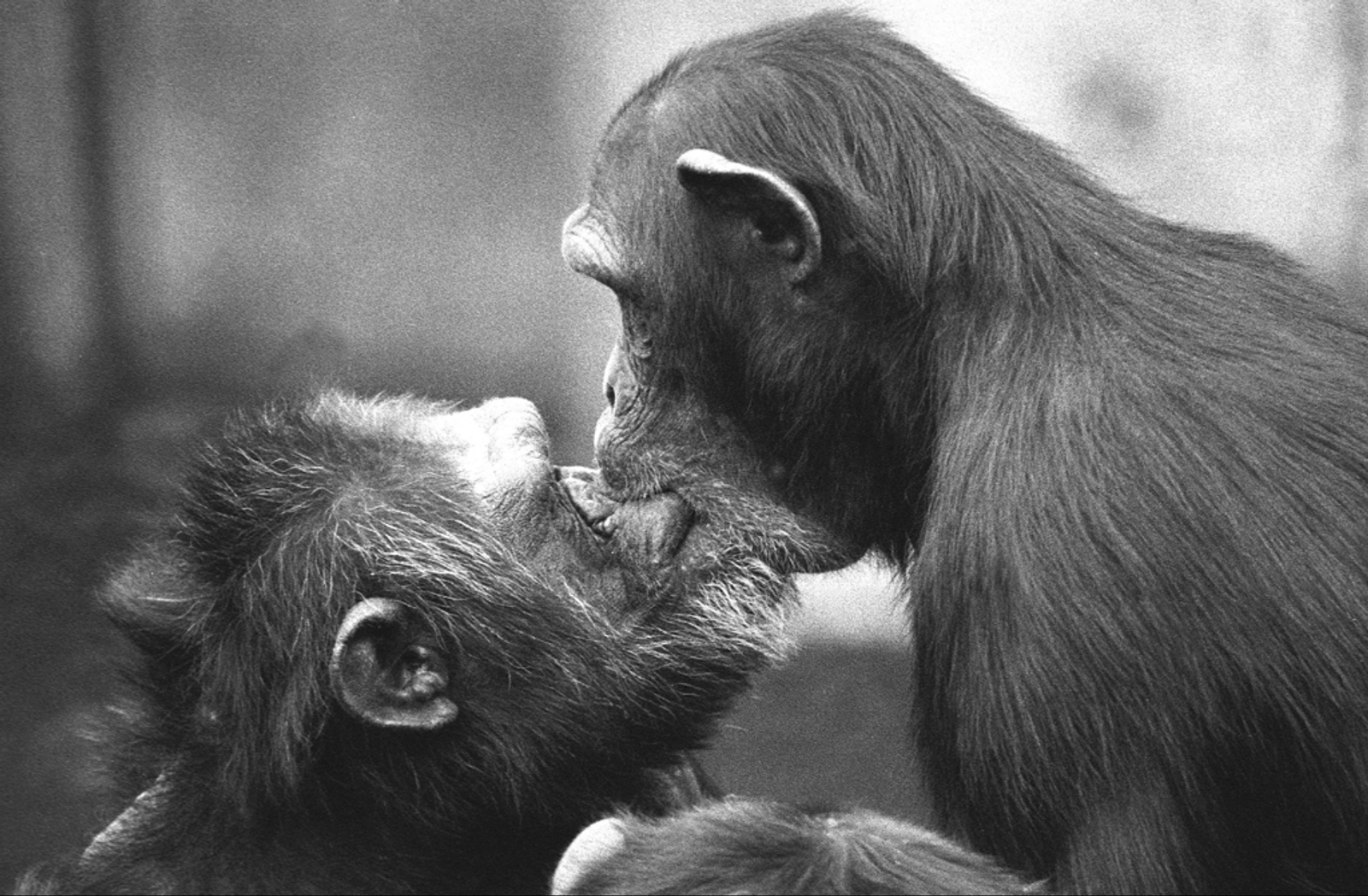 When in the evolution of animals did attention become thinking become consciousness become self-awareness? Consciousness did not materialize singularly and suddenly with the emergence of human beings. Yet animals are often characterized as reflexive and unthinking. Consider the portrait of power-hungry chimps presumed to be simply aggressive, to pursue dominance above all else in groups shaped by harsh competition, reacting almost mindlessly to instinct. Contrast this caricature with the observations of chimps reconciling after a confrontation. 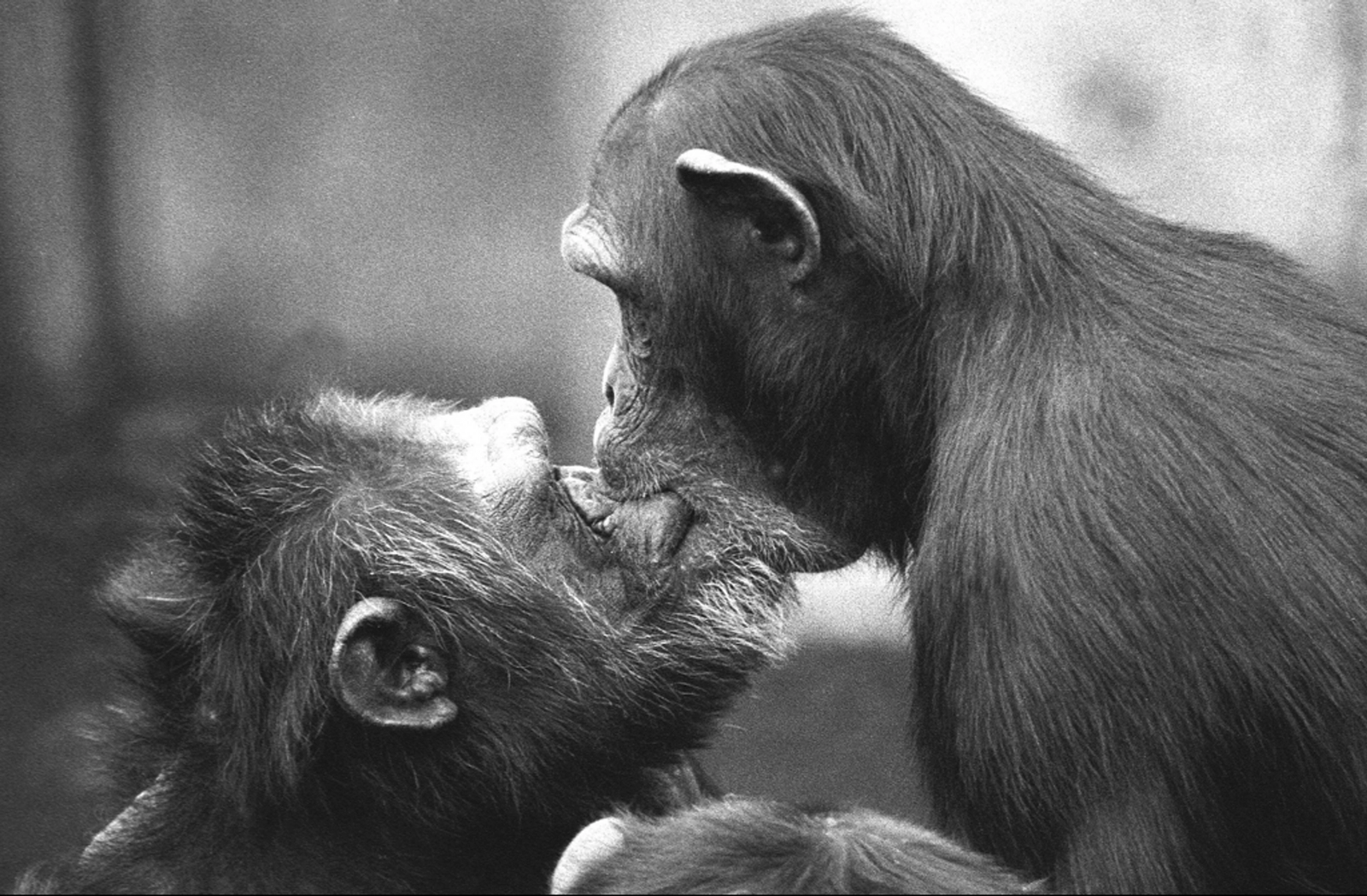 Chimpanzees at the Yerkes Primate Center; a female (right) kissing the alpha male on this mouth as a reconciliation. Photo credit: Frans de Waal

They reach out to each other after seemingly sulking in neighboring trees, meeting in between to hug and kiss. Reconciliation reflects the value placed in their relationships, a desire to mitigate the damage inflicted by conflict. Primates cooperate and console, as do elephants. Some animals demonstrate a sense of fairness, compassion, and empathy. Dolphins admire themselves in mirrors, apparently aware they are looking at their own reflection; that is, they are self-aware. A more balanced appreciation of animal consciousness also forces us to consider the implications for human consciousness and in particular human morality, which seems less an invention of society and more a consequence of evolutionary biology. 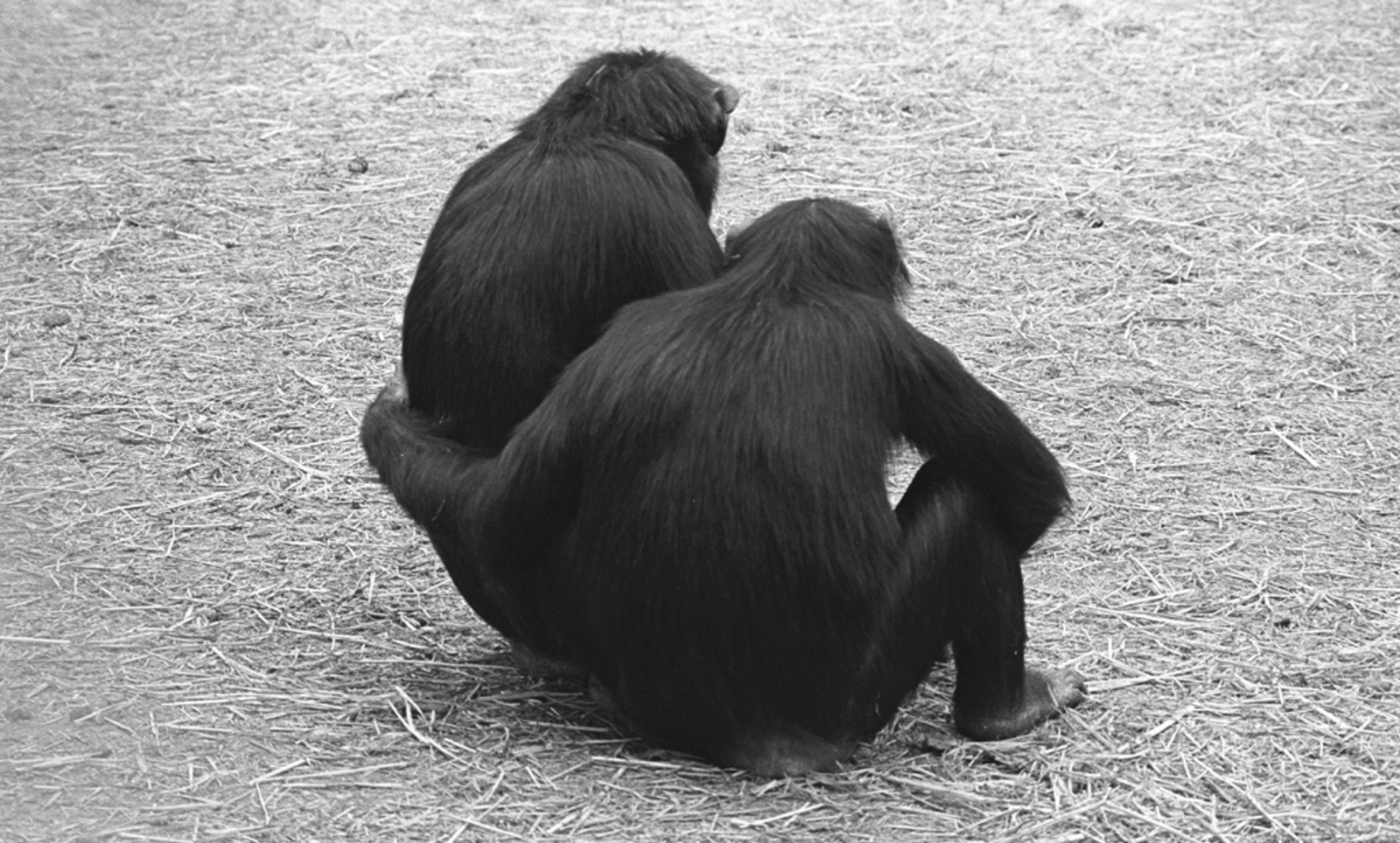 Chimpanzees at the Yerkes Primate Center; a mother / daughter embracing while they watch a fight ongoing in the group, a form of reassurance seeking. Photo credit: Frans de Waal

Famed primatologist Frans de Waal and marine mammal scientist and cognitive psychologist Diana Reiss joined our director of sciences, astrophysicist Janna Levin in conversation as part of our signature series Scientific Controversies. To a packed audience at Pioneer Works, they opened Sci Con 19: Animal Consciousness to the cheers of animal lovers and Sci Con devotees (see clip above and full-length conversation below).

Frans shared his thoughts with us today:

We always think that animals will become more competitive under tough circumstances, and that by extension humans, too, will start ripping each other apart when they are crowded and there is a lack of resources. I heard dire “Darwinian” predictions to this effect in the media. They stem from an erroneous survival-of-the-strongest view, which overlooks that we evolved as social animals. We rely on each other for survival.

When things get tough, our societies don’t fall apart. The same is true for other primates. During a drought, for example, baboons fight less, not more. They slow down their travel and become more peaceful, as if they realize that fighting only will make matters worse by wasting energy. If we crowd primates together, as sometimes done at the zoo, they deal with it by grooming more, and by reconciling more after fights. They try to mitigate the tensions that arise.

We, too, evolved as group animals. We actually do more together, help each other more, during a crisis. A devastating threat such as the Coronavirus has the same effect of closing the ranks, because dangers are best faced together. The cause of the Corona crisis is not exactly known, but speculations are that careless treatment of animals and the environment has brought the virus to us, humans. The ongoing exploitation of nature is based on the idea that we aren’t really part of it. We stand above nature. Traditionally, the West has depicted humanity as separate, as a special creation in the image of God.

The illusion of human uniqueness comes with an arrogant attitude. We can do with Earth what we want and treat other species any way we like. This attitude is now biting us in the behind, delivering climate change, rising sea levels, the extinction of many species, and diseases like COVID-19. We are living in a hell of our own making. To get out of it, the first step to be taken is to acknowledge that we are an integrated part of nature. And not in some superficial way. We are animals, we are primates, and our minds, habits, and needs are not fundamentally different from other primates. This will require an overhaul of our philosophies, which will need to put greater emphasis on commonalities than differences. Once we see ourselves as animals on a planet shared with other animals, we may be able to find an exit from this mess. 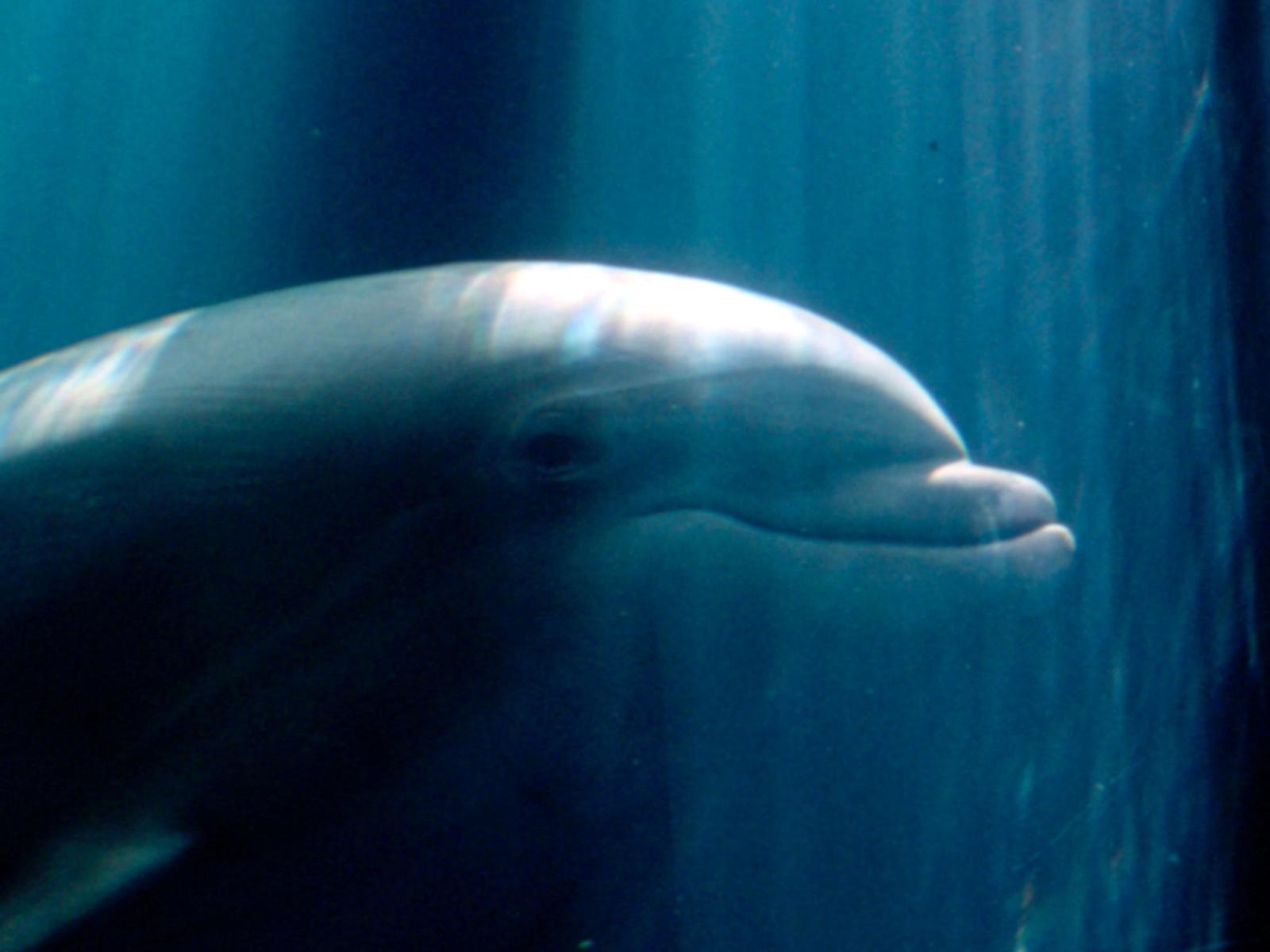 Presley, a male dolphin who was the first non-primate to show the capacity for mirror self-recognition, an indicator of self-awareness. Photo by Diana Reiss

Diana caught up with us over the phone about her work during the quarantine and the changing nature of our interspecies relationships:

During the pandemic, I've learned that many of our animal shelters in New York City were able to place most of the cats and dogs in homes that really helped with staffing being reduced. It was unprecedented; many of the shelters were almost empty of pets. I think people really came together to help other animals and in return both humans and animals won. Beyond the obvious benefits of having pets in our lives there are physiological and positive emotional benefits -- when we're petting and interacting with our dogs or cats in positive ways -- there's a release of oxytocin, a hormone which is linked to positive emotional states, in both us and our pets.

I’ve spent my academic life observing, interacting and learning from dolphins and despite the profound differences in our body forms and our evolutionary distance –we humans and dolphins share many cognitive and behavioral characteristics including cooperative and empathic care giving behavior towards others, vocal learning, high levels of social and self-awareness, and the transmission of cultural learning. Dolphins are sentient self-aware individuals with different personalities, histories, friends and families. They're conscious. They're emotional. They have feelings. Yet we continue to think of dolphins and most other animals as ‘whats’ rather than ‘whos’. But the more we understand the inner lives and behavior of other animals, we find patterns that are familiar to us – patterns that connect us with them. One loud and clear wake-up call from the COVID-19 pandemic is that we need to treat other animals with which we share this planet with respect and protect them and their environment. 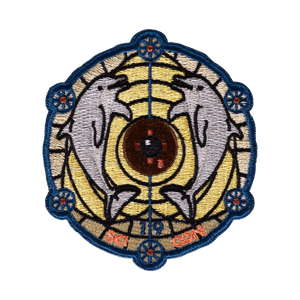 Frans de Waal is a professor of primate behavior at Emory University, director at the Yerkes National Primate Research Center, and has received numerous awards and honors for his research on primates. His books include: The Bonobo and the Atheist: In Search of Humanism Among the Primates, Are We Smart Enough to Know How Smart Animals Are?, and Mama’s Last Hug: Animal Emotions and What They Tell Us about Ourselves.

Diana Reiss is a professor of psychology at Hunter College and in the graduate program of animal behavior and comparative psychology at the City University of New York. Her research has focused on cognition and communication in dolphins and other cetaceans, and her books include: The Dolphin in the Mirror: Exploring Dolphin Minds and Saving Dolphin Lives.

Janna Levin is Chair and Director of Sciences at Pioneer Works and the Claire Tow Professor of astronomy and physics at Barnard College of Columbia University. A Guggenheim Fellow, Janna has contributed to an understanding of black holes, the cosmology of extra dimensions, and gravitational waves in the shape of spacetime. Janna also won a PEN prize for a first work of fiction.

Artist Andrea Lauer designed special edition patches inspired by the conversation. The patch speaks to the self-recognition ability of various creatures, including dolphins. Andrea has designed patches for the entire Scientific Controversies series. We will release more in the coming weeks. Your purchase supports our free programming and our collaborations with artists.