The Drawing That Earned Sir Roger Penrose a Nobel Prize

Picture This is a new column in which scientists describe the power of drawings. 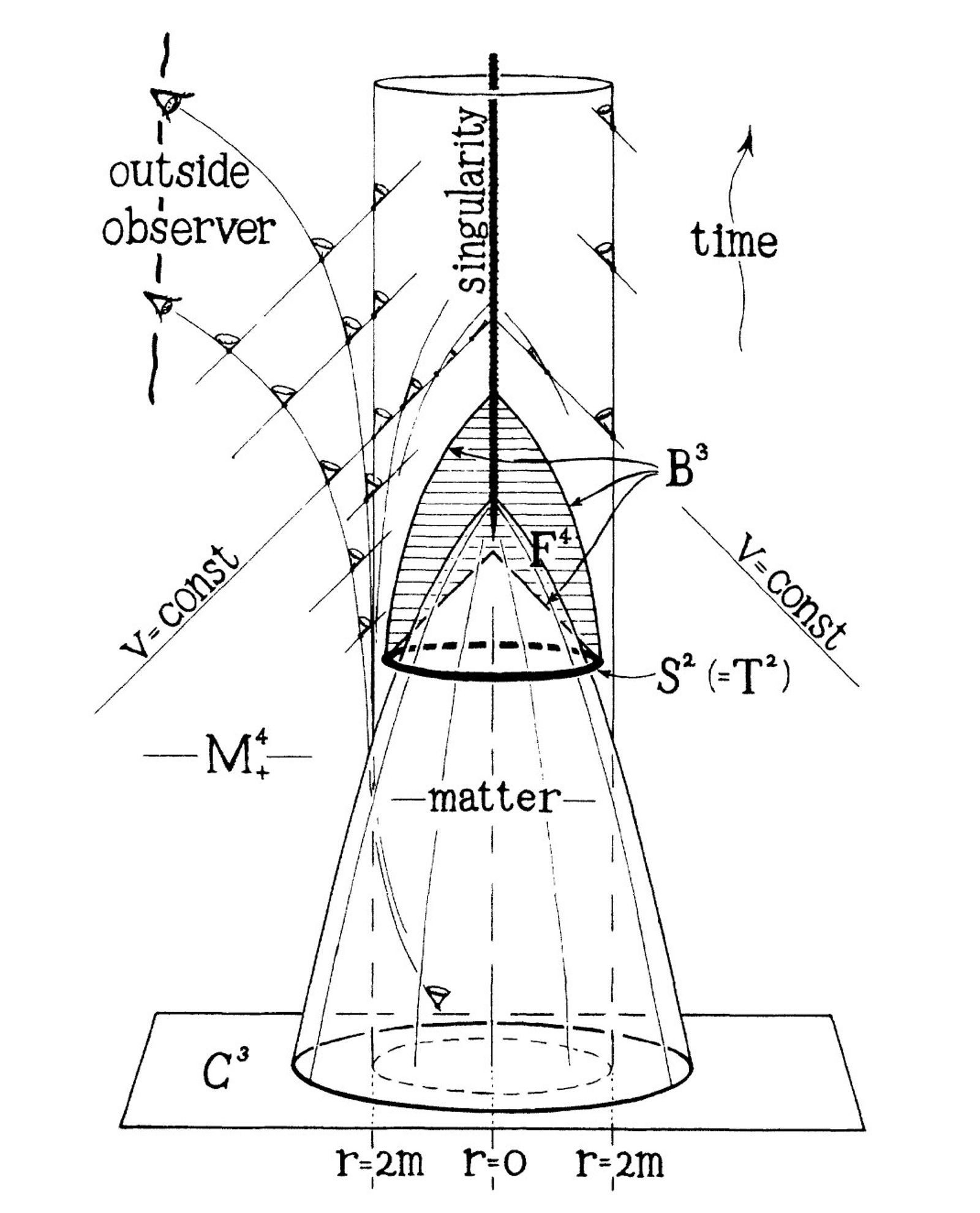 Figure reprinted from Roger Penrose, “Gravitational Collapse and Space-Time Singularities,” Physical Review Letters 14, 57 – Published 18 January 1965
BY Janna Levin
Janna Levin is the editor-in-chief of The Broadcast, the director of sciences at Pioneer Works, and a professor of physics and astronomy at Barnard College of Columbia University. Her latest book is Black Hole Survival Guide.

In 1965, in an inspired and disarmingly clear article – so brief that the text does not quite fill three journal pages – Roger Penrose draws a figure to summarize his ingenious mathematical proof that would earn him the 2020 Nobel Prize in Physics “for the discovery that black hole formation is a robust prediction of the general theory of relativity.” The now legendary Penrose distilled his mathematical calculation into a single paragraph and then distilled the proof even further into a single image that can be read by the initiated. The powerful conclusion: black holes are an inevitable consequence of unhindered gravitational collapse.

The term “black hole” had not yet been coined, and wouldn’t be until the influential American relativist John Archibald Wheeler concluded a lecture in 1967 with the image, “[The star] like the Cheshire cat fades from view. One leaves behind only its grin, the other, only its gravitational attraction…light and particles go down the black hole…” Quasi-stellar radio sources were a newly observed mystery, so named since the signals appeared to come from a single location like a star. Some astronomers hypothesized that the emission originated in the formation of a supermassive black hole (using the moniker “black hole” anachronistically) millions or hundreds of millions times the mass of our Sun.

Although intriguing hypothetical candidates for unexplained sources, black holes were not assured to exist even theoretically. The descriptions of the spacetime structure around hypothetically collapsed stars leaned on extremely simplified symmetries for their construction, not to detract from the significant accomplishment the solutions represent. The first mathematical model of a black hole was presented to Einstein in a letter within six months of the publication of the General Theory of Relativity. The letter arrived from the Russian front during WWI from his friend Karl Schwarzschild, an astronomer and enlisted German soldier, and includes words of such bewildering optimism they are often quoted with some bemusement: "As you see, the war treated me kindly enough, in spite of the heavy gunfire, to allow me to get away from it all and take this walk in the land of your ideas." Schwarzschild imagined a perfect sphere with all the mass of a star crushed to a point. He didn’t ask how nature would create such a thing. He simply chose to imagine it. Nearly a half century later, in 1963, Roy Kerr discovered the mathematical solution for an idealized, perfect, spinning black hole. Despite these formal descriptions, the skepticism towards the existence of black holes in nature was reasonable. The mathematical models were clever but so idealized as to be impossible to achieve in reality.

In that one beautiful paragraph in that admirably concise paper, Roger Penrose defied the prevailing skepticism and proved that in fact black holes were inevitable, thereby throwing open the gates of possibility to real black holes in the universe.

The figure itself is a pleasure to read. Due to our inability to visualize four spacetime dimensions (three space and one time) Penrose drew only two dimensions of space and one dimension of time. So, if a star is a sphere in spacetime, on the drawing it would be represented by a circle. Time elapses from the bottom of the figure to the top. At the bottom of the figure, a star begins to collapse and he draws the lines of the outer atmosphere shrinking as we move up the figure and into the future. At a certain time, the star has shrunk so much that a “trapped surface” forms — what we now refer to as the event horizon. Here it gets interesting. Penrose illustrates that the star is forced to continue to collapse. The proof hinges on the argument that once the event horizon forms, even light is driven mercilessly inward as represented by the cones of light pointing toward the future. Since nothing can travel faster than the speed of light, everything is driven inevitably away from the event horizon deeper into the hole.

The implications are already tremendous: the star is gone and the event horizon left in its wake is an empty shadow that not even light can escape; To an outside observer – the eyes Penrose draws on the left – time appears to stop on the horizon since no more light reaches them; What the observer on the outside presumed to be the center of a sphere is, to the falling star, a point in the future and not a point in space at all. The star can no more halt its descent inside the black hole than we can halt our flow through time.

We read the diagram further and realize that the star collapses catastrophically to a singularity, a spacetime point of infinite curvature, and all light from the star goes with it. The singularity is anathema to physicists. Matter and light hit the singularity and effectively cease to be, cease to exist. Singularities are in violation of the entire paradigm of physics as the future beyond the singularity is not only unknowable, it is meaningless. In the face of his own proof that singularities are inevitable within event horizons because they lie in the collapsed star’s future, he then posits that they must be a false prophecy. He suggests that singularities are signaling the failure of general relativity at that point. He goes further to suggest that the quantum paradigm may rewrite the story of the deep interior of black holes without them.

Penrose is now Sir Roger, knighted by Queen Elizabeth II to the honor Order of Merit, one of only twenty-two living recipients of the highest order. His scientific legacy is staggering in range, profundity, and originality. His truly exceptional mathematical mind is complemented by the rare ability to invoke complex mathematics in imagery. He invented a formal technique to map an infinite spacetime into a finite drawing known as a Penrose diagram. He discovered tilings, now called Penrose tilings, which are coverings of a plane in a set of geometric figures to generate non-repeating patterns. He would doodle and create impossible triangles and other impossible figures that inspired M.C. Escher and even Pablo Picasso.

The proof this handmade drawing represents is a masterpiece. Black holes are inevitable. We now understand that quasi-stellar radio sources, or quasars, are supermassive black holes inducing magnetic storms in the debris around them. In the decade following Penrose’s article, smaller black holes that formed as the death states of stars were observed cannibalizing companion stars. In 2017, the Nobel Prize was awarded to the architects of the extravagant antennae that record the sounds of spacetime ringing around colliding black holes. And in 2019, the Event Horizon Telescope gave humanity its first look at an actual resolved image of an event horizon’s shadow, a behemoth in the galaxy M87, 55 million light years away.

In October 2020, Sir Roger shared the prize with two observational astrophysicists, Andrea Ghez and Reinhard Genzel, who patiently watched stars in the center of our galaxy orbit a heavy, small, invisible nothing – a black hole four million times the mass of the sun. This has been a century of discovery and of reinvigorated enthusiasm for these shadowy entities that prove to be relentlessly provocative. Like Schwarzschild and Einstein, we are living through the darkest of times, braving a plague, social upheaval, unparalleled political rancor and divisiveness. Yet these scientific discoveries invite us to redirect our minds, at least for a brief reprieve, to a shared and vast reality. Penrose offered his mathematical techniques and they have been leveraged prolifically in the decades that followed. The image of M87 is freely available for all to see. The whole of humanity is carried together in this solar system in orbit around the black hole at the center of the Milky Way. The 2020 Nobel prize reminds us to consider the transcendent power of even these most esoteric discoveries to shift our perspective, if only momentarily. We are reminded to get away from the heavy metaphorical gunfire to take a walk in the glorious land of shared ideas.