Pioneer Works’ alumnus, Nicky Mao, on two new releases, constructing giant metal and wood instruments, and the blurry line between “abstract” and “realist.”
music
Nicky Mao, courtesy of the artist.
BY Eli Zeger
Eli Zeger is a New Jersey-based writer and musician. His work has been published in Art in America, The Baffler, The Financial Times, and elsewhere.

Jutting up from rocks on the shores of San Sebastian, Spain, Eduardo Chillida’s gigantic 1976 metal sculptures, The Comb of the Wind, might appear to be bizarre and out of context from their surroundings. Yet they’re designed to interact with the environment, vibrating whenever the wind blows against them like shimmering “trees of iron,” as philosopher Gaston Bachelard once described them. Nicky Mao, who sculpts music as much as she composes it, has been continually awed by the visceral and atmospheric qualities of Chillida’s work. Her latest full-length release, The Comb of the Wind, pays homage with a continuous mix of propulsive, turbulent electronic music that embodies her deconstructionist approach to techno.

Unlike that mix and previous Hiro Kone material, another recent release, MVMNTS, foregoes any sort of melody or rhythm; instead, it’s a proper noise album. Mao recorded and later performed it with Roxy Farman (of the band Wetware) during their 2019 collaborative residency here at Pioneer Works. The two built an instrument out of sheet metal and springboards, which Farman would play either with a bow or by pounding with her hands, captured by contact microphones that channeled through Mao’s modular synthesizers. All proceeds from MVMNTS are going to COVID Bail Out NYC, an organization that posts bail and provides additional services for people incarcerated in Brooklyn, Manhattan, and Queens.

In between recording her next Hiro Kone album, Mao talked to me about these two particular releases. She recounted what it was like seeing Chillida’s sculptures in person last summer, and the exciting process of building an instrument from scratch with Farman. In the time since our conversation, Mao dropped a live album called Repossessed, which captures her 2017 Pioneer Works performance with Little Annie reimagining the punk icon’s 1984 album Soul Possession. 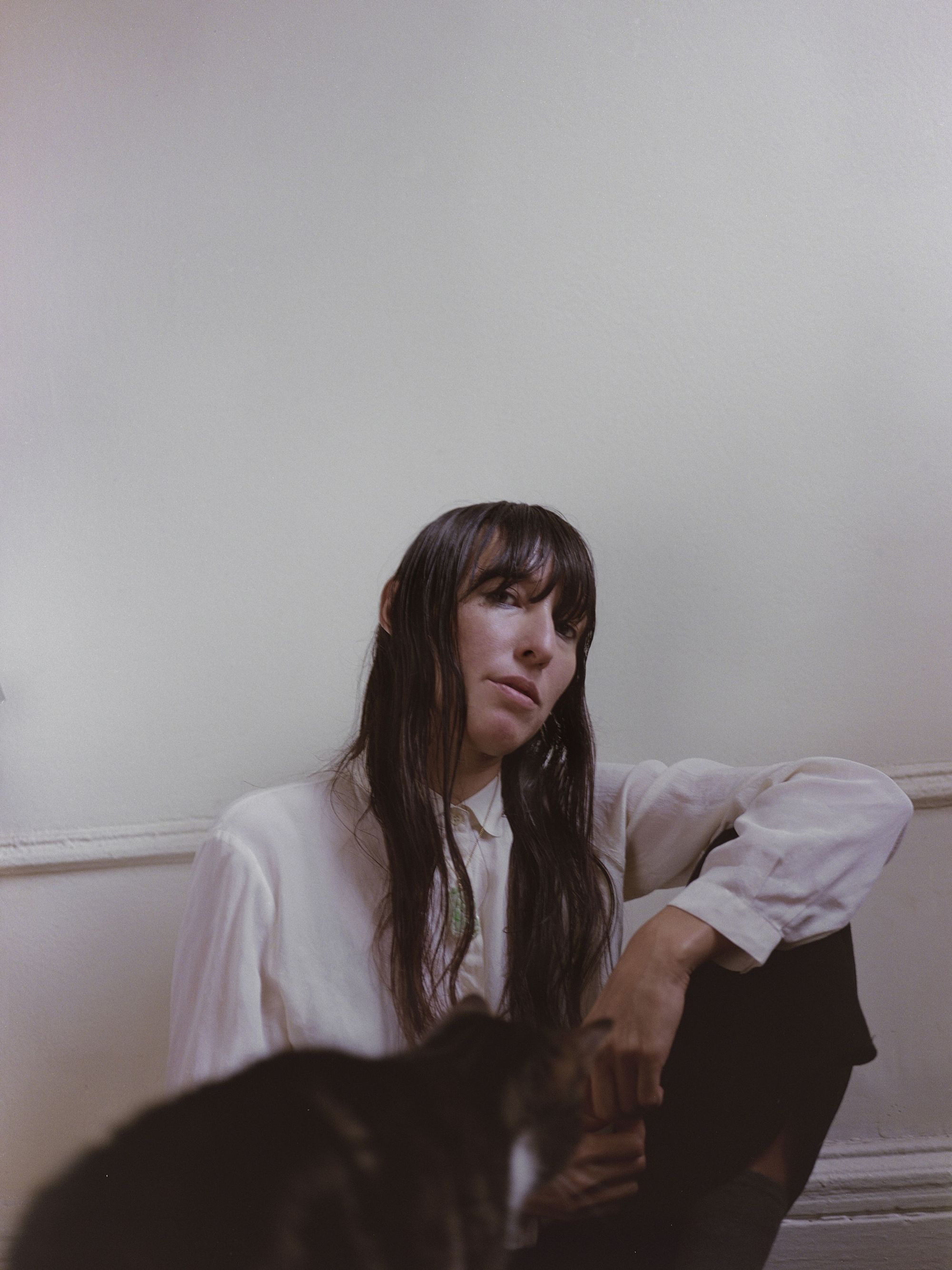 How soon into lockdown did you start recording The Comb of the Wind?

It took me a while. First there was this paralysis I had, like a lot of people, but there was also this instinct to try to work through it. I realized very quickly that I couldn’t do that, and that this was a very unprecedented moment. My normal coping mechanisms didn’t work, and I think a lot of people realized the same for themselves. My friend Faddy in London reached out to ask me to participate in this series that Hot Desk collective were putting out, to raise money for Hackney Migrant Centre (and since matching to Black Minds Matter in light of the protests). It took me maybe a month before I started to work on it. When I did, what jump-started it was going through some of the recordings that I had made pre-lockdown, when I was getting ready to start rehearsing for this tour I was going on—I was going to be touring in Europe for two months. Like so many people, my April and May tour dates got completely wiped out. So I’d been starting to rehearse and put my ideas together for that.

Every time I do a tour, I change a lot even if I’m doing an album-based set. I make a lot of alterations; it never sounds like the record. There were a couple of “rehearsals” I’d recorded before lockdown that were pretty great, and it dawned on me that I would never get to share them. These live versions of tracks from [my previous record] A Fossil Begins to Bray were gonna just lay dormant. So I figured that would be a good place to start, and that helped me start working through and being able to piece together this long mix of both live versions of songs from the album, but also new things that I was doing in lockdown—meditations and trials, I guess.

The meditations you did for this mix, are you also doing them for the upcoming Hiro Kone album? Have you developed any other techniques that you want to apply to future material?

Definitely. That’s the one silver lining about having this space, I’ve had a lot of time to try things that I’ve always wanted to try. I decided to push back the release of my new record into next May; it was gonna come out next April. The last few years have been really busy for me, which has been amazing, but I look forward to seeing the results of having the extra time. I’ve been doing a lot of sketches, some of those are becoming songs for sure.

Because The Comb of the Wind is a continuous mix, was that format conducive to more experimentation with new techniques, as opposed to a regular tracklist format?

Totally, yeah. Depending on the context, things change—it’s sort of like when you do a DJ mix and you put songs together and overlay things. There’re so many directions you can take it, and it was liberating to do it this way. These are things that I’m coming up with and I think are interesting. How they speak with each other, how they work together is cool. I think that’s why my shows have been so different than the album. The constraints can benefit you in different ways. I appreciate the opportunity to try out different methods and approaches.

Have you visited the Eduardo Chillida sculpture before?

I have, yes. It was amazing. I have this obsession with the Basque sculptor Jorge Oteiza and Chillida. I made this pilgrimage last summer—in between tours I was in Europe a lot, and my friend and I got together and drove through the Basque country to see all these sculptures. It was incredible. I really see my music sculpturally, so I respond very emotionally to Chillida and Oteiza’s sculptures in particular for some reason, and to see them up close was really incredible.

Chillida rejected being called “abstract,” insisting on being a “realist” instead. But I think something you show in your music is that abstract/realism isn’t necessarily a binary. How do you see the overlap between those two qualities?

Even though I often reference a philosophy, or make cultural or political critiques within the music, I don’t conceptualize everything at the beginning.
NM

Yeah, that’s a great thing to pull out of that. Even though I often reference a philosophy, or make cultural or political critiques within the music, I don’t conceptualize everything at the beginning. I’m not an academic in that way. It’s very much experiential for me, ideas and things I’m reading collide as I’m making the work. It’s not a very intentional thing, it just happens. I’m just a person absorbing information and processing it, and I suppose the way I make music helps me do that, too. At times maybe you’ll hear what may seem to be a literal or representational sound, at other times it’s an abstracted sensation of something that I might be thinking or talking about. I always think about what we do as artists, whatever it is you do, you’re learning your language and developing it, and it becomes very unique. That has everything to do with experience. When you can really allow people to enter that world, without hitting them over the head with it—that’s poetry, that’s The Comb of the Wind. 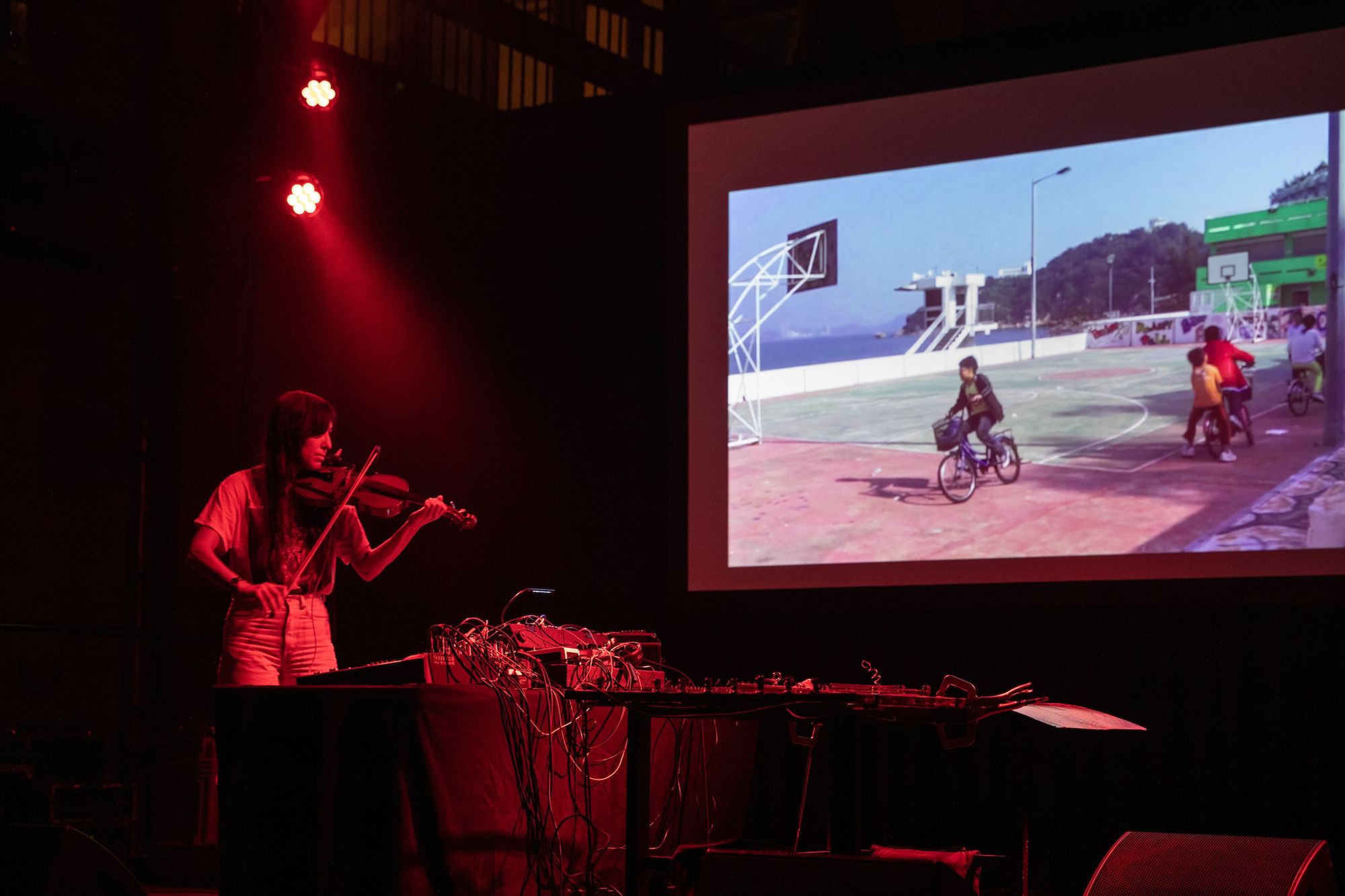 Chillida’s artworks are abstract but also, in a sense, interactive. That seems to relate to your Roxy Farman collaboration, where you had the gigantic sheet metal object that produced actual music. How did you and Roxy conceptualize that instrument?

We both had it in our heads to build some sort of instrument. I really saw this physical thing (maybe a sculpture) that we could interact with. It quickly became larger than life. We spent several days going around looking at springs, sheets, other things that we wanted, and Roxy would draw up the plans for how this thing should be implemented and look. She went to art school, so she’s way better at drawing than I am, for sure. Neither of us had experience building an instrument though. Luckily for us, we had the support of our friend Kyle Keays from Pioneer Works and he welded the whole thing together for us. Then I made contact mics for it. It was an amazing process for us to do that together, and then to hook it up to the modular was really wild.

How did you test out that it was making the right sounds you wanted it to make?

We spent hours trying things out—tightening springs, loosening things. We had different bows, we found junk to throw at it, kind of trying anything to see how it interacted and making little adjustments. The thing is, though, is that it’s a temperamental [instrument], so we could one day have a jam, and the next day trying to recreate that was nearly impossible. It was pretty loose.

So the “movements” you recorded on the album were different from the ones you did live?

They’re as close as they could be considering. Those movements that we ended up using were a series of recordings from the week leading up to the actual performance, so we chose the best parts and sort of collaged it together. Honestly, when we were playing around in the studio, we weren’t paying too much attention to the fact that we were recording, which was maybe a good thing, it’s all very sincere. It was also a really nice thing to go back and listen to it so many months later, and discover, “Wow, this is actually really interesting.” Thinking about it now, this recording was the first thing I really worked on during those first couple months in isolation. I think both Roxy and I really welcomed the task of putting this together. At the time of our residency, it was sort of risky for us, the whole performance, building an instrument, in the limited amount of time. I’m incredibly proud of what we accomplished together and that it culminated in this release.