Have you ever wanted to know what it is like to be an influencer cat? We have. So we interviewed the lovely Ms. Flufflestiltskin, she of over fifty thousand IG followers.
art 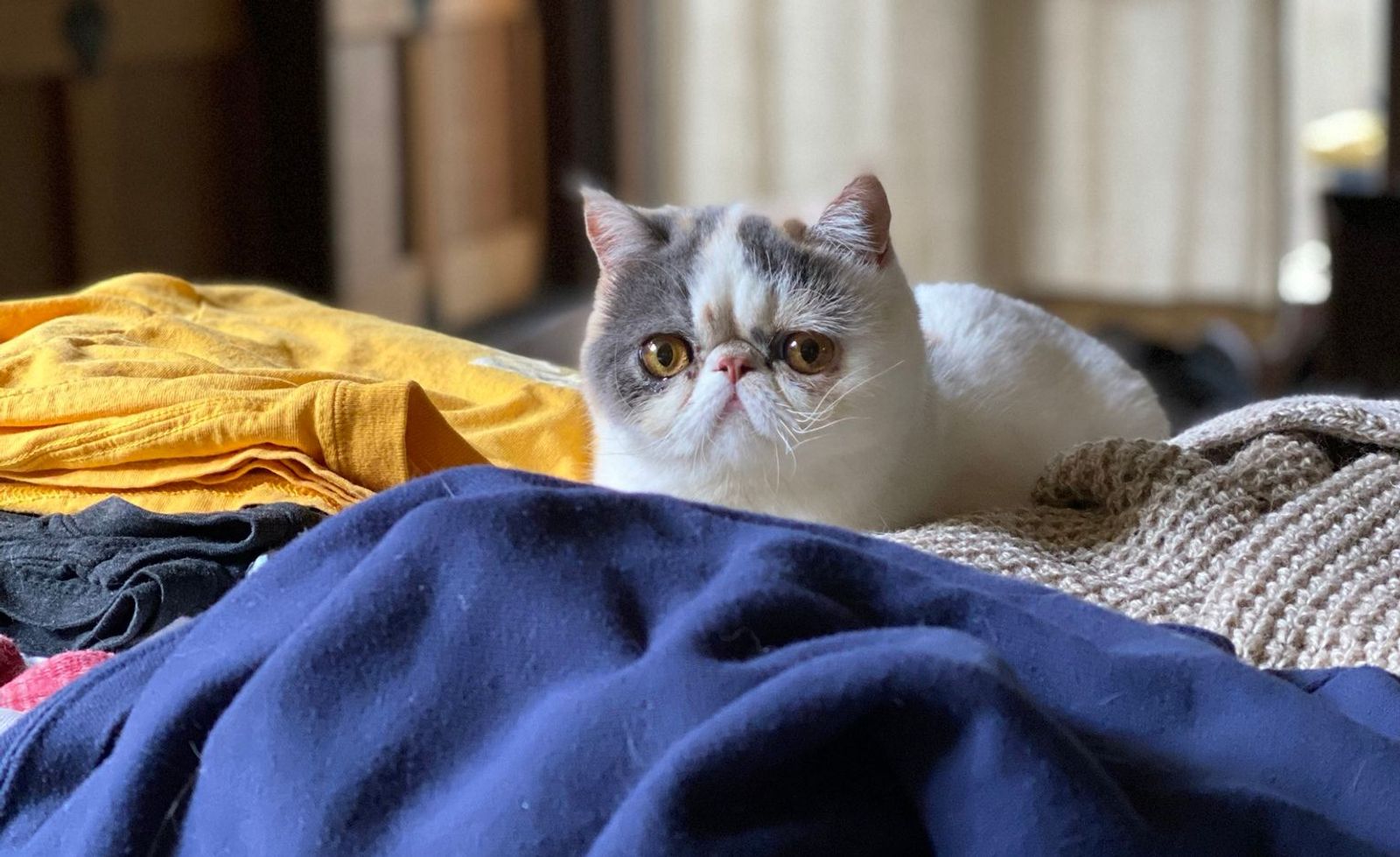 Flufflestiltskin at home Image courtesy of the cat
BY Mary Thompson
Mary Thompson is the former Communications Director of Pioneer Works and a writer based in California.

In 1983, Czech author Bohumil Hrabal was in a serious car accident that bound him to his Kersko cottage, where he lived with his wife and the overwhelming number of stray cats they had taken in, or which had taken them in. The role of ownership is unclear. Hrabal would look into his backyard and see numerous cats “push their heads through the gap in the fence and gaze forlornly after us,” encroaching everywhere around him. He detailed life with this cat hoard, his love and hatred and overwhelming fixation, in All My Cats, a recent translation of which was published by New Directions in 2019. He felt guilty when he went to Prague and left his cats alone; he also couldn’t stand them. These feelings exist together and at once.

This is all to say that I have been thinking about Hrabal and his cats a lot lately. Holed up in my studio apartment that really can’t fit the two people that live in it, I have no cats, but I also have too many cats. I scroll and scroll and scroll through my Instagram feed, and cat heads pop up out everywhere. My friends have all adopted cats and made Instagrams for them. The internet loves its cats. What is the life of a cat-gone-viral like?

I got a chance to talk to one such cat, Ms. Flufflestiltskin, about life during the pandemic. She tells it to me straight, with lots of puns and lessons for living life on the digital plane. Our discussion brings about a more serious point: what is the relationship between viral internet fame and a rampant virus pandemic that has us looking at our screens, simply because there is nowhere else to look? 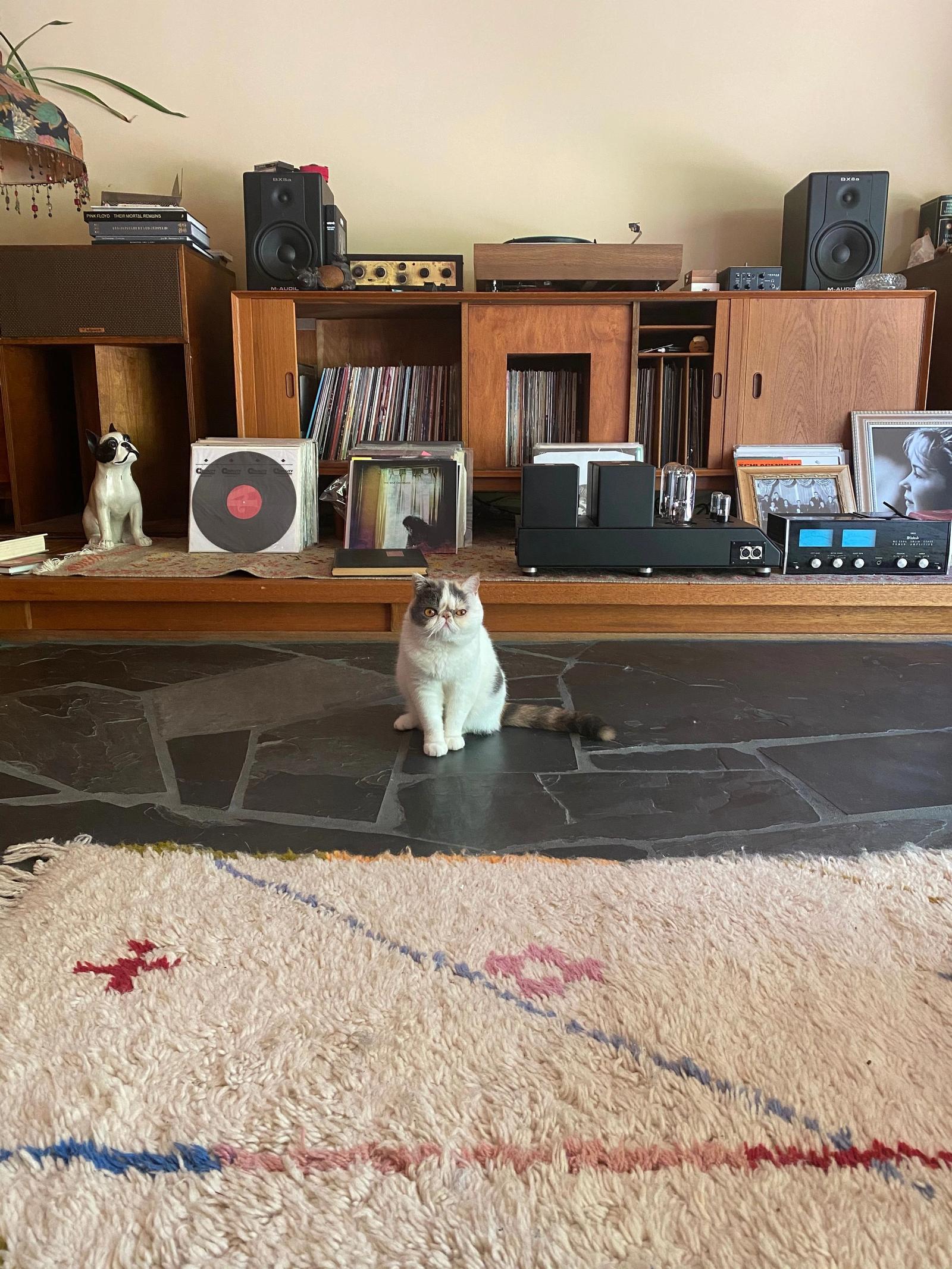 How has life changed for you since quarantine began? How is Ms. Flufflestiltskin dealing with the pandemic? You’ve never been outside, is that correct?

It hasn’t been easy, I miss my own Fluff time. Don’t get me wrong, the human I share the palace with is fine. He just never leaves now. I have managed to sneak outside a handful of times… Unfurtunately I’m usually caught within seconds.

It was recently reported that there is a possibility that cats can catch COVID-19 from humans. Are you afraid of getting sick or are you taking any extra precautions?

Well, let's just say I haven’t been having any pawties lately…

We spotted you with a Pioneer Works Journal, the print precursor to Pioneer Works Broadcast, on one of your Instagram stories. That got us curious about what you are reading now. Do you have any reading recommendations for this time?

I just finished reading If Cats Disappeared from the World by Genki Kawamura and I'm about to start If It Bleeds by Stephen King. The cover caught my eye…

Cats are often stereotyped as loners, but no man is an island. Do you find you fit this stereotype or is social distancing affecting you too? Any advice for humans?

As I mentioned previously, I like my alone time. But no one should be alone most of the time. I’m all about relationships and experiences—the experiences with my treats and the relationships with the people who give them to me.

How have you maintained relationships during this time, specifically with your human housemates as well as your longtime partner, Mildred the Squirrel?

It's been a lot easier on Mildred having our human friend around all the time to feed her more frequently. She was looking like she could stop Wayne Gretzky on a breakaway.

Tell us more about the life of a cat influencer. (Is it okay to call you that?) What is your day-to-day like?

I prefur infurencer thank you very much. The most challenging bit is wanting to meet all of my instafriends but also realizing that some things are just out of my control. It could be worse, I could be shuffled around to Cat Con. Is that a thing?

Where do you fall on the emotional scale on the pantheon of famous cats, from Nyan Cat to Grumpy Cat?

I'm pretty much the best kitty I know of. I felt bad for Grumpy Cat and the cross that she had to bear making people think she was sad all the time. My best mood is mischievous.

I was ONLY into Cats the musical. Then the movie happened and I was embarrassed for all of us. Humans as well. Right around that time I felt inspired by Kobe. But I have a new Idea and I'll share it with you furst… I'm going to follow a different animal once a week from now on. Starting as soon as this interview publishes.

Your Instagram presence is a force to be reckoned with. Could you give us some Instagram pointers as we sit on the couch and find our best angles? 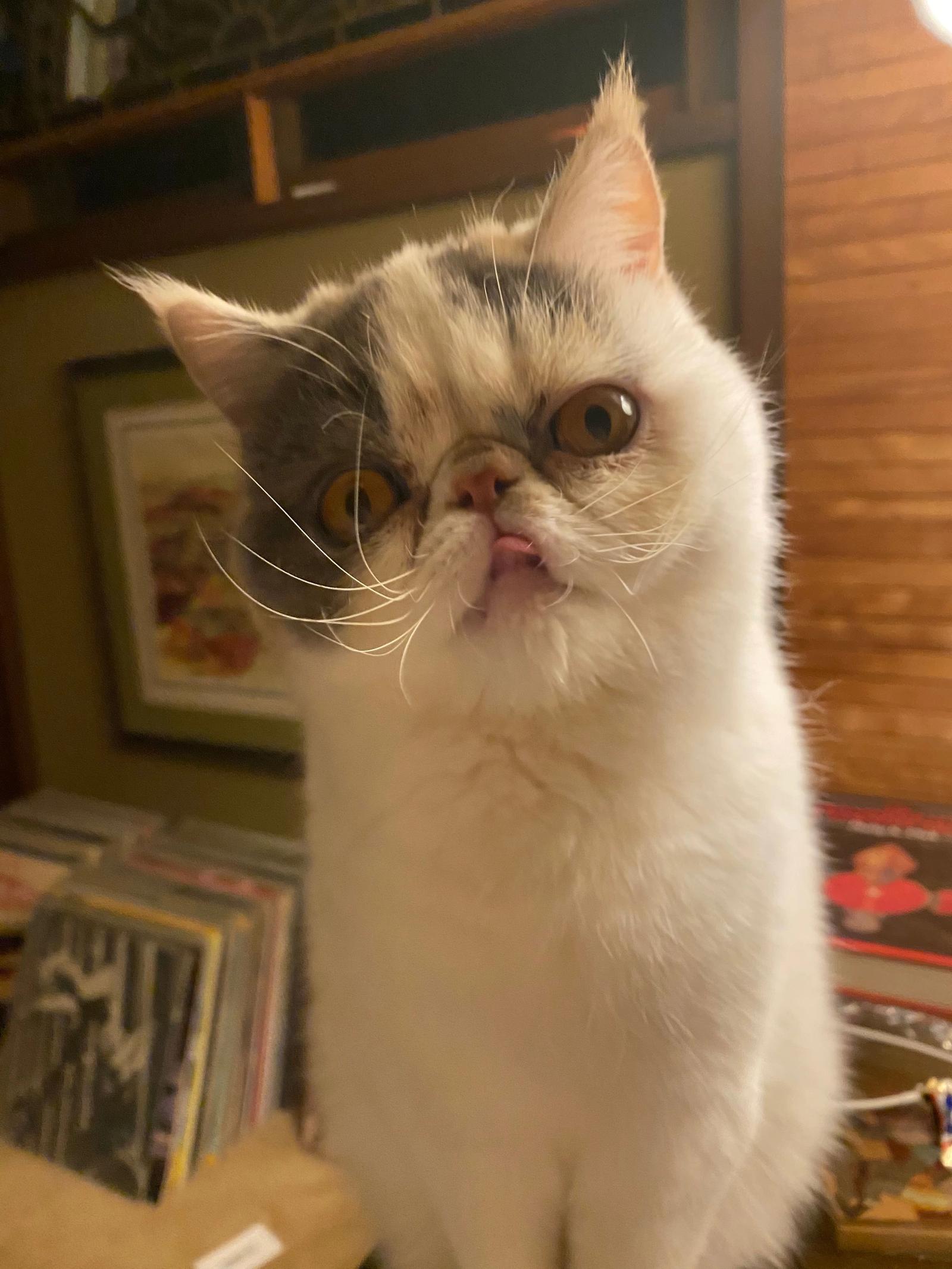 After talking with Ms. Flufflestiltskin, I think back on all my cats.

The term “viral” being used to describe an internet sensation began in 2009 with YouTube videos like David at Dentist that had a rapid fire spread from platform to platform, user to user. We understand cultural relevance, cultural memes, as viral sensations. They spread quickly from person to person and then fade into obscurity. More recent platforms, like the late, great Vine and now TikTok, are created on the premise of a rapid spread and short life cycle. Online, many aspire to be viral. Internet virality changed celebrity culture and the way we received it, understood it, and performed with it.

The rapid-spread of media and content sharing is a metaphor derived from the way viruses spread, quickly, host to host, before perishing. We’ve always known virality, but now we know it all too well. We’ve spent the last decade obsessed with internet virality. Now, as we face a dangerous and actual virality, how will our relationship to the digital dream of celebrity and cultural relevance change?

Viral internet cats are often quickly forgotten, replaced with a new breed. In the last year, we’ve seen the passing of internet famous cats, Grumpy Cat and Lil Bub, but we stopped talking about them long before. This sort of inevitable disregard inherent to digital culture is not wholly separate from the violence and obsession in All My Cats. We are overwhelmed with news from a virus that leaves us cloistered at home, often engaging only through a digital sphere. Do we turn to hold onto digital virality more closely, or do we let this obsession fade away? Again, the question of ownership and control blurs. Between Hrabal and Fufflestiltskin, maybe there is an answer.

Hrabal died by falling out of a hospital window. He was feeding the pigeons below. My boyfriend and I have taken to watching the birds outside our one window. We contemplate getting a birdfeeder. We see a cat in the distance, also watching.