Ahead of Thursday's Pioneer Works online screening of Black Holes: The Edge of All We Know, Emma Komlos-Hrobsky spotlights the recent scientific breakthroughs captured in the new documentary.
science 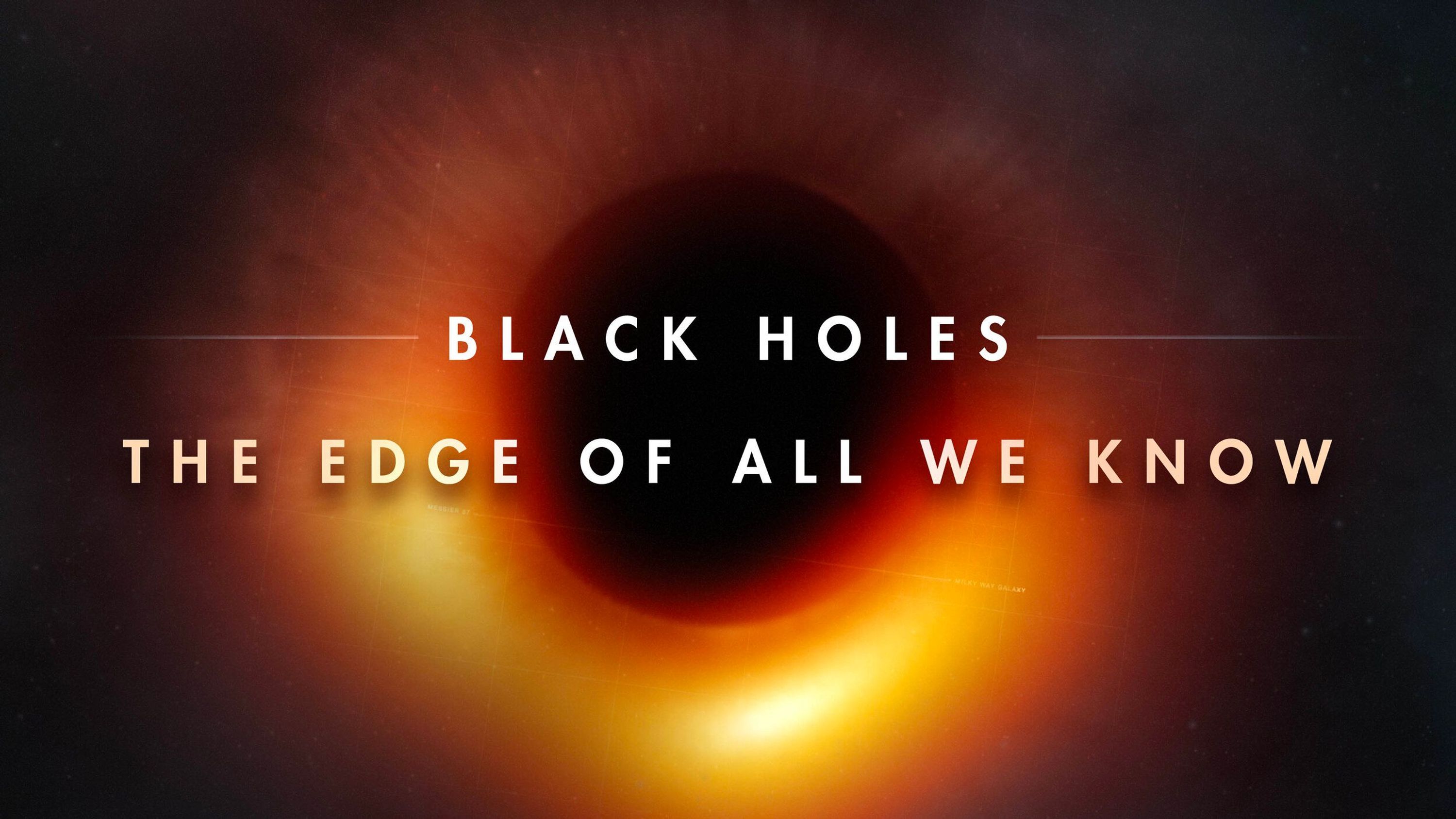 From the film "Black Holes | The Edge of All We Know". Graphic made by Momentist.
BY Emma Komlos-Hrobsky
Emma Komlos-Hrobsky's writing has appeared in Guernica, Tin House, Hunger Mountain, The Story Collider, and elsewhere. She is currently at work on a novel about particle physics, family, and the Alps.

Astrophysicists love places where the universe seems to break its own rules, where reckoning with phenomena that seem to contradict the laws of physics can in turn expand our understanding of the cosmos. At the center of every galaxy in our universe spins one such tantalizing paradox, the black hole. Perhaps the most charismatic Chaos Muppet in the known universe, the black hole is an annihilating vortex whose gravitational pull is so strong that it swallows up everything in its proximity, including light, and compresses it to a single point. Once past a threshold called the event horizon, light and matter vanish inside never to escape, leaving no apparent evidence of what the black hole has consumed. A black hole, then, is as difficult to know as it is fantastic, and its study poses its own paradoxes: How do you look at something that emits no light, that can’t be seen? How can you understand the inner workings of something that can’t be looked into, and that seems to challenge our notion of what we can and cannot know? The pursuit of these questions and meta-questions drive the film Black Holes: The Edge of All We Know.

This latest documentary by Peter Galison tells the stories of two extraordinary endeavors to bring us closer to understanding one of the most elusive and unknowable phenomena in our universe. The first thread of the film follows a team of scientists led by Shep Doeleman as they collaborate across continents and decades to take the now-famous first picture of a black hole, the mesmerizing image of M87* ringed in glowing red that was released in April 2019. The task of making this image is in every way enormous: Even the nearest black holes are so far away and so dim that creating an image of them at any meaningful resolution requires a telescope of unprecedented scale. The Event Horizon Telescope (EHT) used by Doeleman’s team is in fact an array of eight observatories positioned across the globe, from the South Pole to Spain, and designed to work in tandem to make a receiving dish effectively the size of the earth. At the appointed hour, their many dishes swivel in synchronization like sunflowers following the arc of the sun, collecting the distant light of the plasma that surrounds the black hole. The years of labor needed to fund and construct the telescope array culminate at last in a string of anxious days and sleepless nights of observation. But the quest for the image of the black hole is far from over: All this information—more data per night of observation than any experiment has gathered in the history of physics—must then be painstakingly assembled to create an image with theory alone for guidance, a process something like trying to assemble a jigsaw puzzle of a basket of kittens, not just without peeking at the lid, but without ever having actually seen a cat.

The film’s second thread follows collaborators Stephen Hawking, Malcolm Perry, Andrew Strominger, and Sasha Haco as they pursue a different kind of reckoning with the limits of our understanding of black holes, and specifically the black hole information paradox presented by Hawking in 1975. Astronomers are only able to measure three properties of black holes: their charge, their mass, and their angular momentum. Beyond this, black holes seem to hold no record, no physical information, about anything that has fallen into them. This leaves a lot of physical information unaccounted for, an apparent absence that would upend the fundamental idea in physics of the conservation of information. Moreover, if such destruction is possible, cosmologists—in fact all scientists—face a serious problem: If information is not conserved, we have no way of knowing what information may be missing as we examine the way physics constitutes and orders our universe (a particular concern as we look for information about our cosmic history). And black holes get more unruly still: As they evaporate and lose mass over time, they leave behind Hawking radiation, a random stew of particles that seemingly bear no relationship to what fell into the black hole. This is another taunting clash of the cymbals from the black hole as Chaos Muppet, a suggestion that the universe is not ordered but random—an idea that challenges the possibility of the study of physics itself and is what Strominger calls “the most interesting, well-posed question in modern physics.” 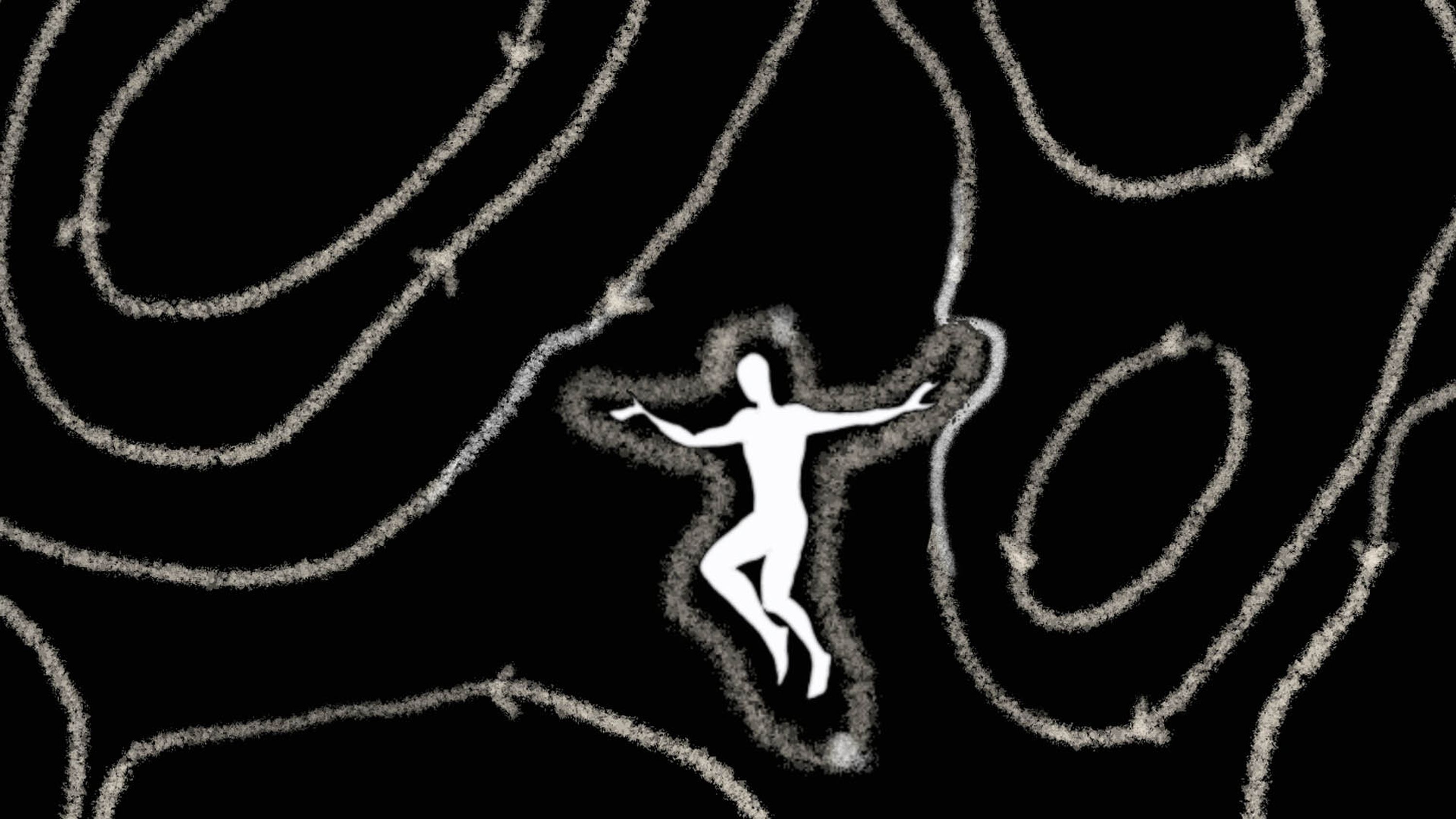 Hawking, Strominger, Perry, and Haco conjecture that the key to this koan may lie in something called, delightfully, “soft hair.” Soft hair consists of zero-energy photons that surround a black hole’s event horizon and that might contain information about the matter that has fallen inside. Because a formula exists for how much information can be stored in a black hole, the four collaborators’ hope to reconcile the quantity of information soft hair might contain with the missing quantity of information the formula predicts. At Hawking’s invitation, the physicists convene at a countryside estate to work this problem together. The quartet of physicists tackle the equation with pencil and paper, riddling out missing terms, seeking to shore up gaps in their logic, and worrying also that they might be making entirely human mistakes by the time they get to term 500 or 600 in their 1,050-term computation.

These scenes of the pursuit of the unknown are as quotidian as they are extraordinary, flotsamed with the ordinary stuff of being a person on earth: weather and accident and snacks and mood. While the Event Horizon Telescope collaborators have constructed a telescope that can make an image of something invisible 53.49 million light years away, the telescope array can only take its pictures when the weather is good; it takes a string of days in which the weather is clear at all eight observatories to run the experiment. Even after this stroke of luck, the polar station later becomes too frozen over for the data collected there to be, literally, extracted. Later in the film we get a tantalizing peek at the some of the data in material form as they arrive from Chile. The data are sent not as the world’s largest e-mail attachment but are stored on what looks like a rack of hard drives and mailed in a cardboard package that one really, really hopes doesn’t get dropped while the rack is being shimmied free. 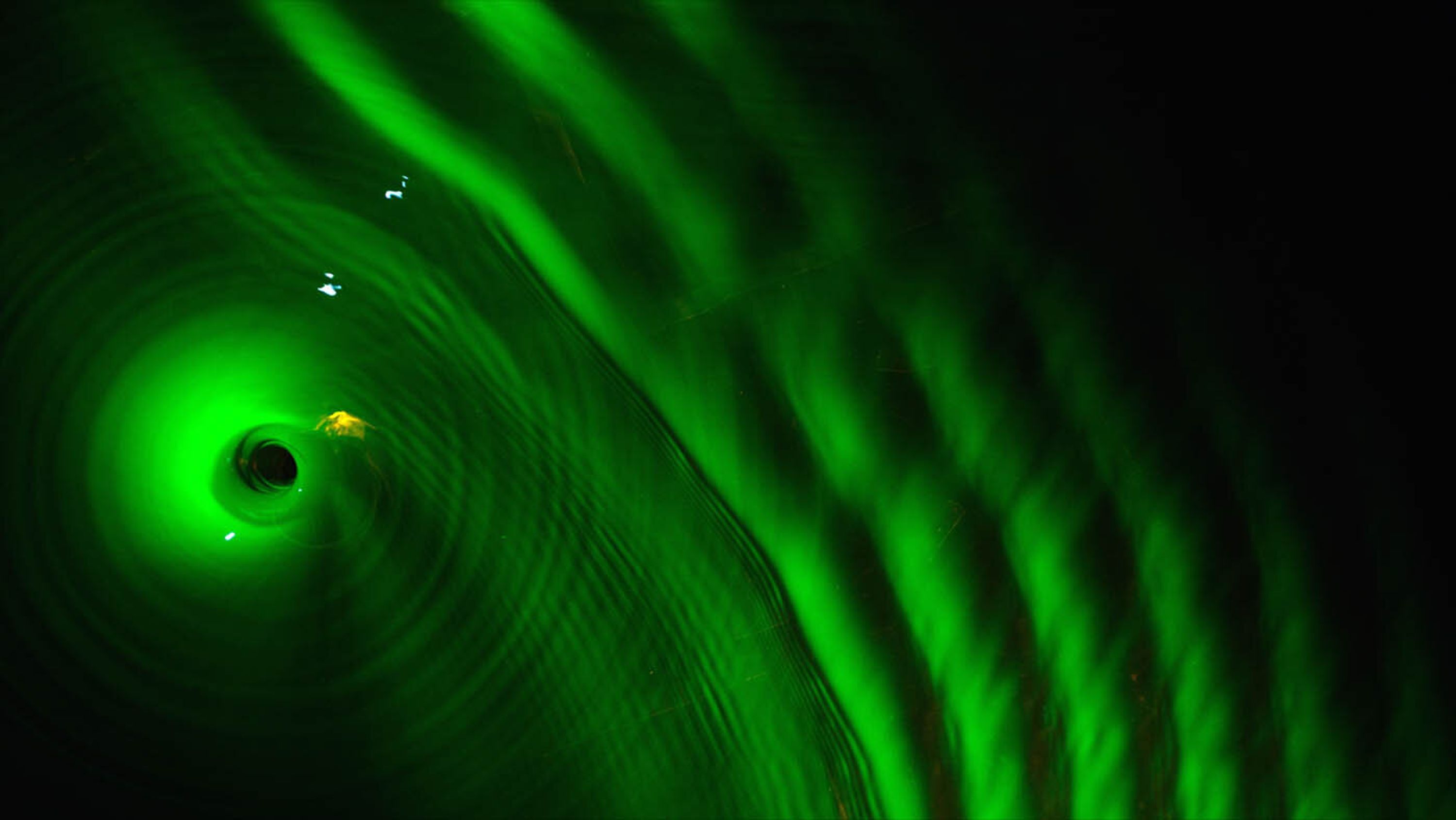 Watching theoretical physicists work—even such luminaries as Hawking and company—might seem difficult stuff to dramatize on film. In fact, it’s a pleasure: A glimpse of a chalkboard in Strominger’s kitchen suggests the way he badgers away at the paradox of black holes “pretty much 24/7;” Strominger and Perry and Haco hammer away at the equation together, correcting and complimenting each other’s thinking; Hawking emerges to collaborate, each utterance itself a feat, offering careful additions that have a tendency to catalyze the group’s thinking in some new direction. As big as the work is, it’s also made tangible and human. It happens on a battered chalkboard in a corner room, over cups of off-brand coffee or bags of trail mix, maybe with someone whistling “Over the Rainbow” or with the occasional break to stretch one’s legs in the country air. That is to say, the wonder of getting to see some of the world’s greatest physicists at work is something like the wonder of gazing at a photograph of a black hole: The extraordinary is seen to be entirely real.

The wonder of getting to see some of the world’s greatest physicists at work is something like the wonder of gazing at a photograph of a black hole: The extraordinary is seen to be entirely real.

“We want to see,” says one physicist interviewed about the EHT, so beyond intuition and the limits of our conception is the black hole that no other evidence may quite as gratifying or as clarifying. But as this possibility nears, and a hackathon convenes to turn the data from the EHT into an image, the inherent difficulties in human reckoning with the nature of black holes loom in a new way. The scientists are split into four different groups to work with the data and are forbidden from comparing notes with the other teams, to protect the integrity of the image they produce. Because no one has seen a black hole before, there’s no reference point against which to compare and validate their work, and multiple attempts will hopefully converge towards the most accurate picture; perhaps the even more interesting risk is that the scientists might assemble an image that tends towards their expectations rather than what the data actually indicate. Even the world’s most powerful telescope inevitably offers an image through a human lens, and it’s moving to see the scientists, after so much work, now work to protect the image from themselves.

The photograph that emerges as last from all this is a thing of beauty, a radiant and varied crimson ring on a field of black, and still a paradox: Even this image is actually a shadow, a photo of the light of the plasma surrounding the event horizon of M87*, rather than black hole itself. Nevertheless, the image takes us farther past metaphor and simulation and theory, towards encounter with the phenomenon itself. Hawking and his collaborator’s parallel step is more tenuous at the film’s conclusion, a possible solution still to be fully reckoned with—an invitation to fellow astrophysicists to continue to tilt at the unknowable, to kick down the walls of the limits of what we know. It turns out a good physicist is a bit of a Chaos Muppet, too.

RSVP for Thursday's screening of Black Holes: The Edge of All We Know