Dramatic highlights from the skies above New York City by intrepid astronomer Joe Patterson.
A meteor during the peak of the 2009 Leonid Meteor Shower. The photograph shows the meteor, afterglow, and wake as distinct components.Photo: Navicore
BY Joe Patterson
Prof. Joe Patterson is a professor of Astronomy at Columbia University, an observational astronomer, and a baseball enthusiast. (He was also our editor-in-chief’s first astronomy professor.)

Birthday of Marie Curie (nee Sklodowska) in Warsaw in 1867. The only person ever to win Nobel Prizes in different fields (1903 Physics, 1911 Chemistry). 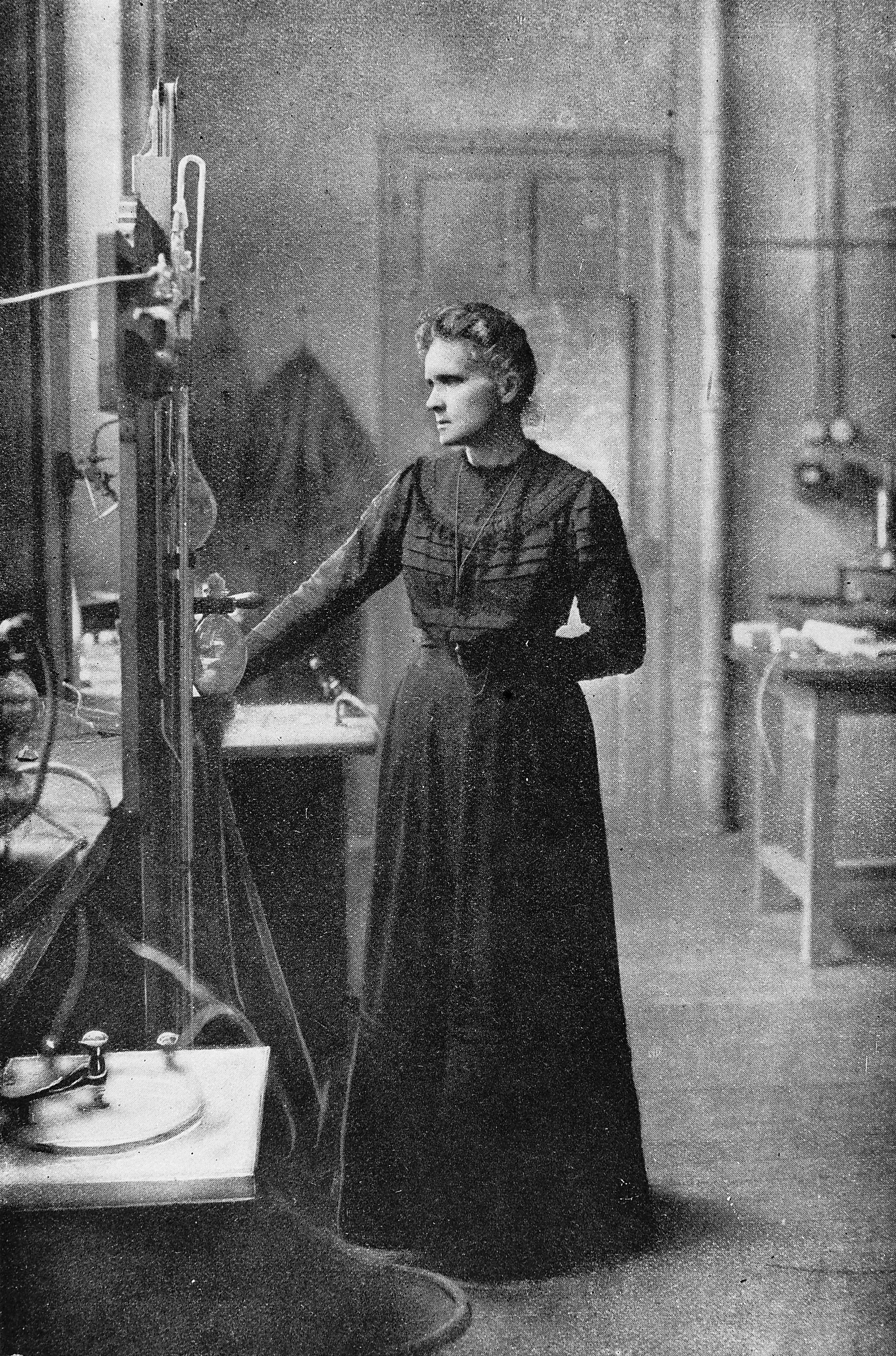 In this morning's sky, all USA observers will see a total lunar eclipse. A few minutes after the partial phase begins (4:10 am), you might see a little nick taken out of the Moon's side. Over the next hour, that nick—the Earth's shadow—grows to cover the entire Moon. The total eclipse begins at 5:17 and ends at 6:42 am. During totality, you'll probably notice a reddish tinge to the remaining faint moonlight. This is sometimes called the Blood Moon (ooooooo……), and it comes from sunlight that has reached the Moon after getting refracted around the edge of the Earth. Thus lunar residents, looking back at Earth, would see a faint reddish circle around the darkened Earth's periphery. Some total lunar eclipses are bloodier than others (any guesses why?; no one knows, so your guesses are safe). I've seen some that are deep red, some just a faint gray, and one where the Moon disappeared entirely (to the eye) during the total phase.

By the way, pay no attention to any times you see listed for the “penumbral eclipse.” A penumbral eclipse is when the Moon is still fully illuminated, but by a slightly dimmer light.  You won't notice the difference; it's like reading by a 60-watt rather than a 100-watt bulb.

But here's a big problem. For New Yorkers, all of this occurs in the early morning hours, when the Moon appears quite low in the west. City lights might bother you a little, but BUILDINGS are an absolute scene-wrecker. Pardon me for being obvious, but you need to see the Moon…and therefore need a clear view to the west, as near to the horizon as you can manage. (Actually, the Brooklyn waterfront should be pretty good.)

Half the Earth—the side facing the Moon—will see the eclipse. That's true of all lunar eclipses. But far less than half of humanity will be able to see it, because the center-line of this eclipse (where mid-eclipse occurs at local midnight) coincides almost exactly with the International Date Line, where humans don't live. That's the mid-Pacific, if you haven't checked a map lately. Apologies to Fiji, New Zealand, etc. For Earth's most populated regions—Asia, Africa, Europe—the eclipse occurs in daylight hours, when the full Moon is always below the horizon (since it's 180 degrees opposite the Sun). 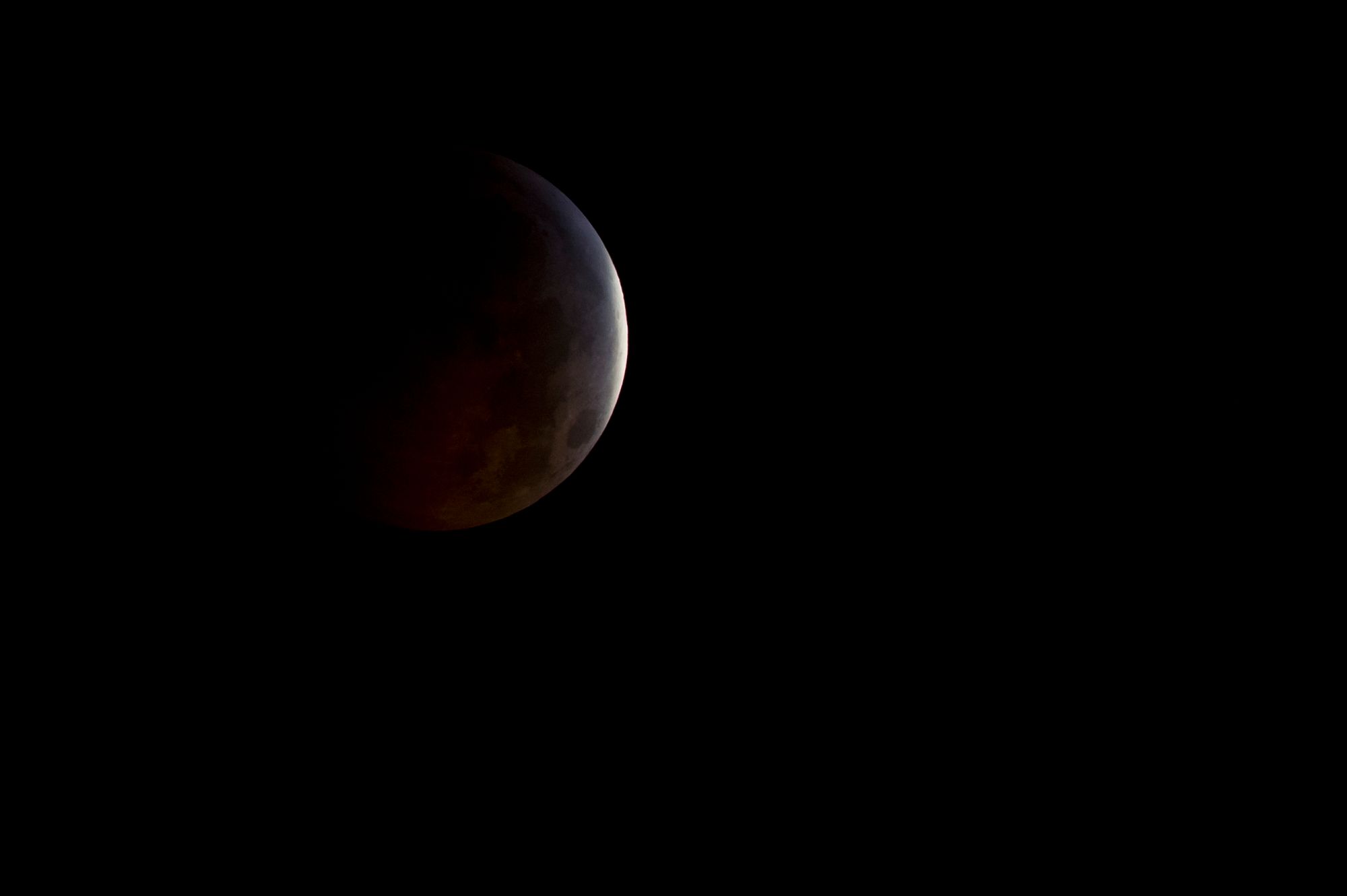 A nearly total lunar eclipse is seen as the full moon is shadowed by the Earth on the arrival of the winter solstice, Tuesday, December 21, 2010 in Arlington, VA. From beginning to end, the eclipse will last about three hours and twenty-eight minutes.Photo: NASA/Bill Ingalls

In the USA, November 8 is also Election Day. No matter what their political preferences, columnists and talk-show hosts will be hard-pressed to avoid finding significance in the Blood Moon. Emmys or Pulitzers should go immediately to anyone who resists the temptation.

On these two nights, the nearly full Moon passes near Mars. The red planet is rapidly brightening as it approaches its dramatic December 8 opposition (closest approach to Earth).  Look at it up there, slightly above the constellation Orion.

Tonight is Autumn Starfest, an event for the public organized by the Amateur Astronomers Association of New York. Talks, telescopes, public observing, and even a raffle. Everything is free. 5-8 pm, East Meadow of Central Park, enter from 5th Avenue at the 99th Street gate.  WEATHER PERMITTING.

Tonight is the peak night of the Leonid meteor shower, occurring when the Earth collides with dust debris strewn around the orbit of Comet Tempel-Tuttle. The comet itself is nothing special, and is now out there beyond Jupiter. It's an ordinary comet, but at least once spewed a huge hunk of dirt and ice, which continues to orbit the Sun with the parent comet's 33-year period. So astronomers keep an eye out each November 16-17, when we collide “with the orbit.” That apparently happened on November 13, 1833, when Boston observers reported meteors falling “like snowflakes in an average snowstorm.” Other great displays were seen in 1868 and 1966. Nothing special is expected this year, but comets and their debris are famously fickle. 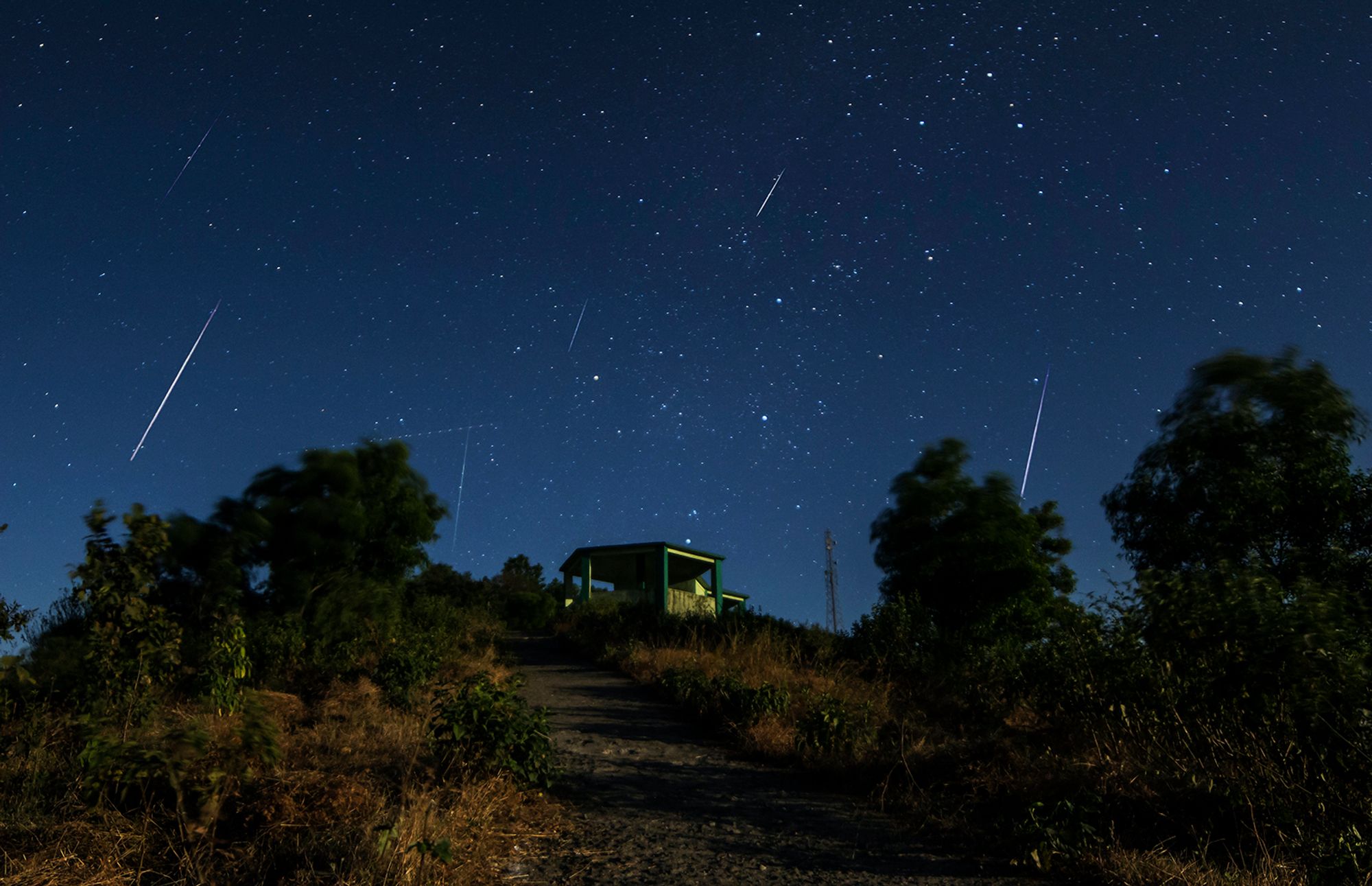 Roz Chast once described comets as like NYC landlords: they live very far away, with a heart made of ice and stone.

During this interval, there will be particularly good overpasses of NYC by the International Space Station (ISS). Each one lasts 3-6 minutes, and they're separated by 95 minutes (the orbital period of the spacecraft). Now you might think that there'd be ~16 overpasses every day. Technically, there are. But to be "good," it has to occur at night (to be visible), and pretty close to sunset or sunrise (because, at only ~100 miles altitude, it'll be in the Earth's shadow within a few hours of every midnight).

Once you see it, follow it ‘til it disappears (in just a few minutes). It's fascinating to see how it just fades away in the middle of the sky. It's entering the (unseen) Earth's shadow!

Each one of these overpasses is about as bright as Venus:

Remember, the spacecraft travels 18,000 mph. Typically, when you first see it, it's approximately over Kansas. Five minutes later, when it disappears, it's somewhere south of Greenland.

New Moon at 5:56 pm EST. Also, the Sun enters the constellation Scorpius. Whoa! Didn't stay long in Sagittarius, did it? And shouldn't it be traversing these constellations in the OPPOSITE order? Truth be told, astronomers—mostly the Brits—paid only rough attention to astrological boundaries when they divvied up the sky in the 19th century. They had a difficult task: make the star pattern roughly resemble a scorpion, roughly keep the boundaries of old star maps, and assign each zodiacal constellation 1/12th of the Sun's path. On top of all this, they were well aware that the Earth's 26,000 year axial precession would make their assignments gradually obsolete. So, in the ~2000 years since the traditional zodiacal were set, things have moved almost an entire constellation. So about 5/6 of all people are in “the wrong sign.”

But it could have been worse. Those Brits could have put Queen Victoria in the sky. 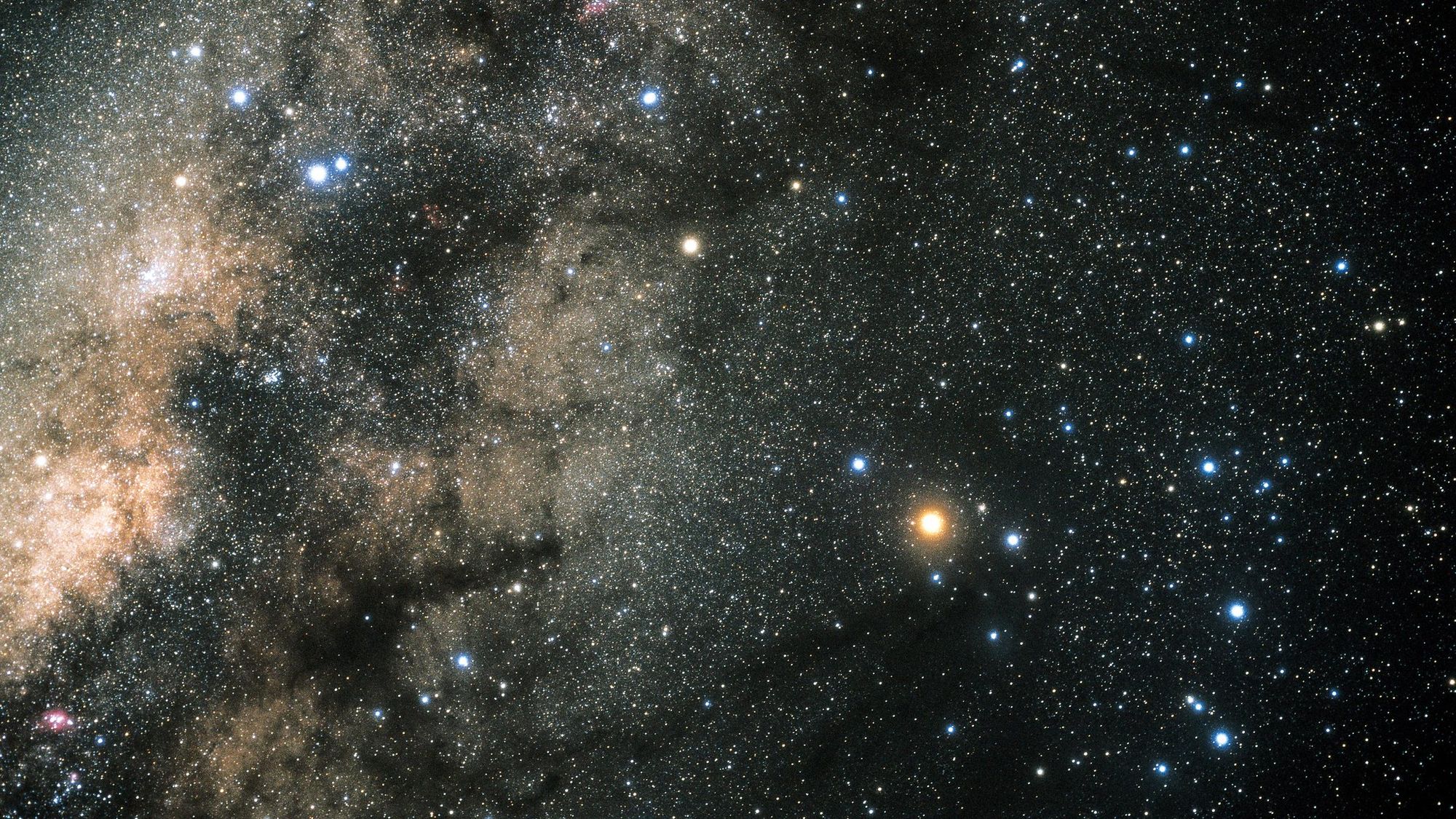 Thanksgiving. No astronomical significance whatsoever. But if you adopt the (highly recommended) practice of giving thanks at dinner, here's one for you: give thanks that the Moon and the Sun have the same angular diameter. And if you're pretty savvy, tell your dinner companions why it's worth celebrating. (They'll think it's weird, but tell them anyway.)  Plus, if you're VERY savvy about such matters, tell them why it will not always be so. We live at a special time in history.

The medium-bright object near the Moon on these evenings, shining with a steady yellow-ish light is Saturn. Great for telescopic viewing.

First quarter Moon. Sun enters Ophiuchus (the Serpent Bearer). Not on the traditional zodiacal list, but the Sun visits every November 30. ♦