Dramatic highlights from the skies above New York City by intrepid astronomer Joe Patterson.
science
A central portion of the Hubble Deep Field, created from exposures taken in 1995.NASA.
BY Joe Patterson
Prof. Joe Patterson is a professor of Astronomy at Columbia University, an observational astronomer, and a baseball enthusiast. (He was also our editor-in-chief’s first astronomy professor.)

Mars at opposition. This term means it's “opposite” the Sun in the sky. Therefore it rises at sunset, is directly south (but VERY high in the sky, nearly overhead) at midnight, and sets at sunrise. Also, it’s as close to the earth as it ever gets—just 48 million miles. Therefore it's very bright—about as bright as Sirius, the brightest star in the sky. Shining with its distinctive baleful red color, Mars is a beautiful sight on all December nights. And on good nights, it will be a great target for telescopic viewing throughout the month. 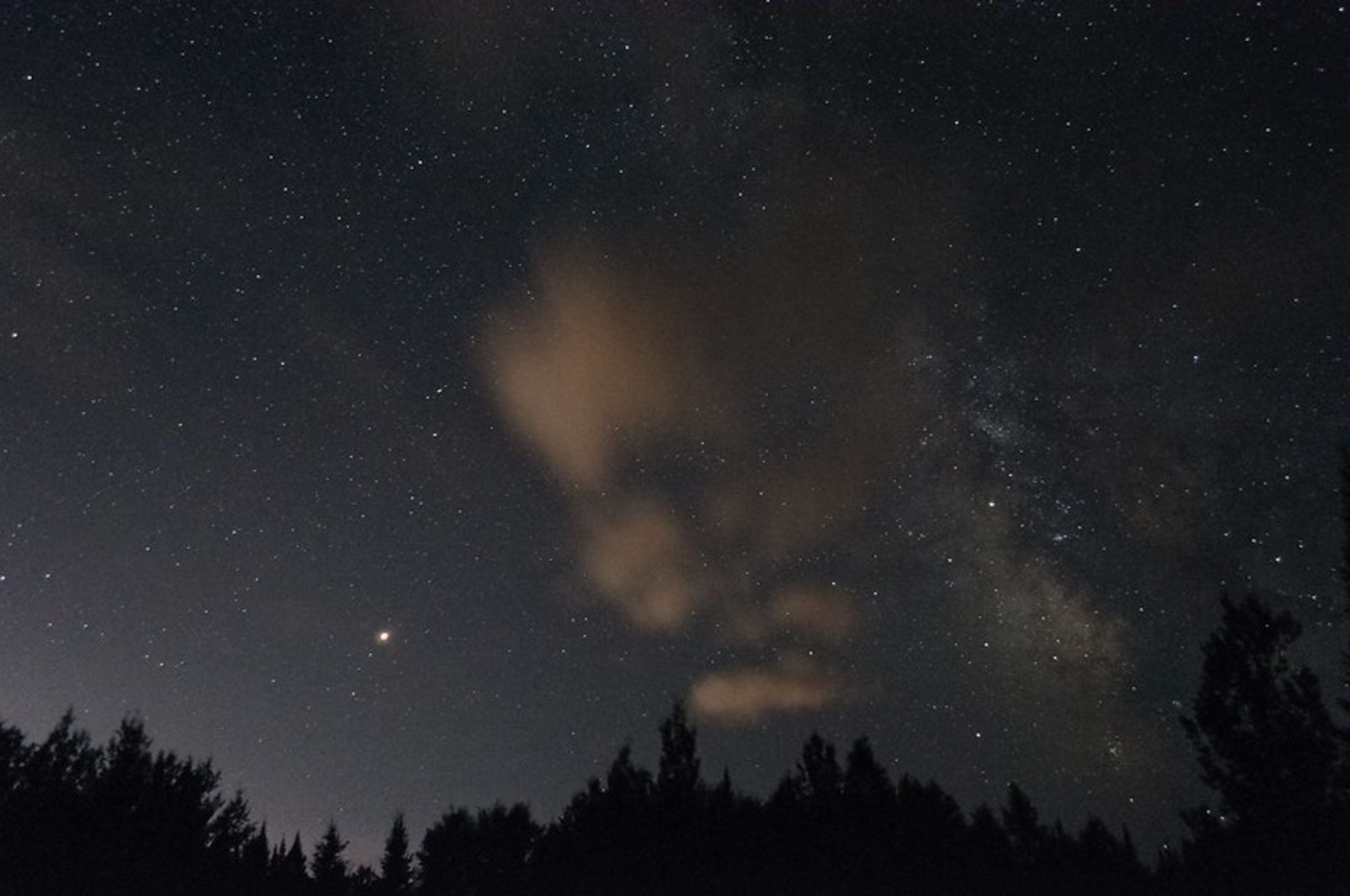 On this date in 1942, the first controlled, self-sustaining nuclear chain reaction was achieved by the “Manhattan Project” scientists—in an underground squash court at the University of Chicago. Working under the direction of Enrico Fermi, the team found that by bombarding uranium with neutrons, the uranium would fission into lighter elements, together with more neutrons, which would immediately find more uranium to fission—each time with energy release (because mass is lost, and E=mc^2). This was the basis of the atomic bomb. They basically knew this would happen, but needed to find a way to control the reaction—otherwise you couldn't build a bomb without blowing yourself up. After the tense but successful experiment, the team cabled to the super-secret agency, “The Italian Navigator has discovered the New World.” The cryptic reply came: “How were the natives?”, eliciting the answer “very friendly.” 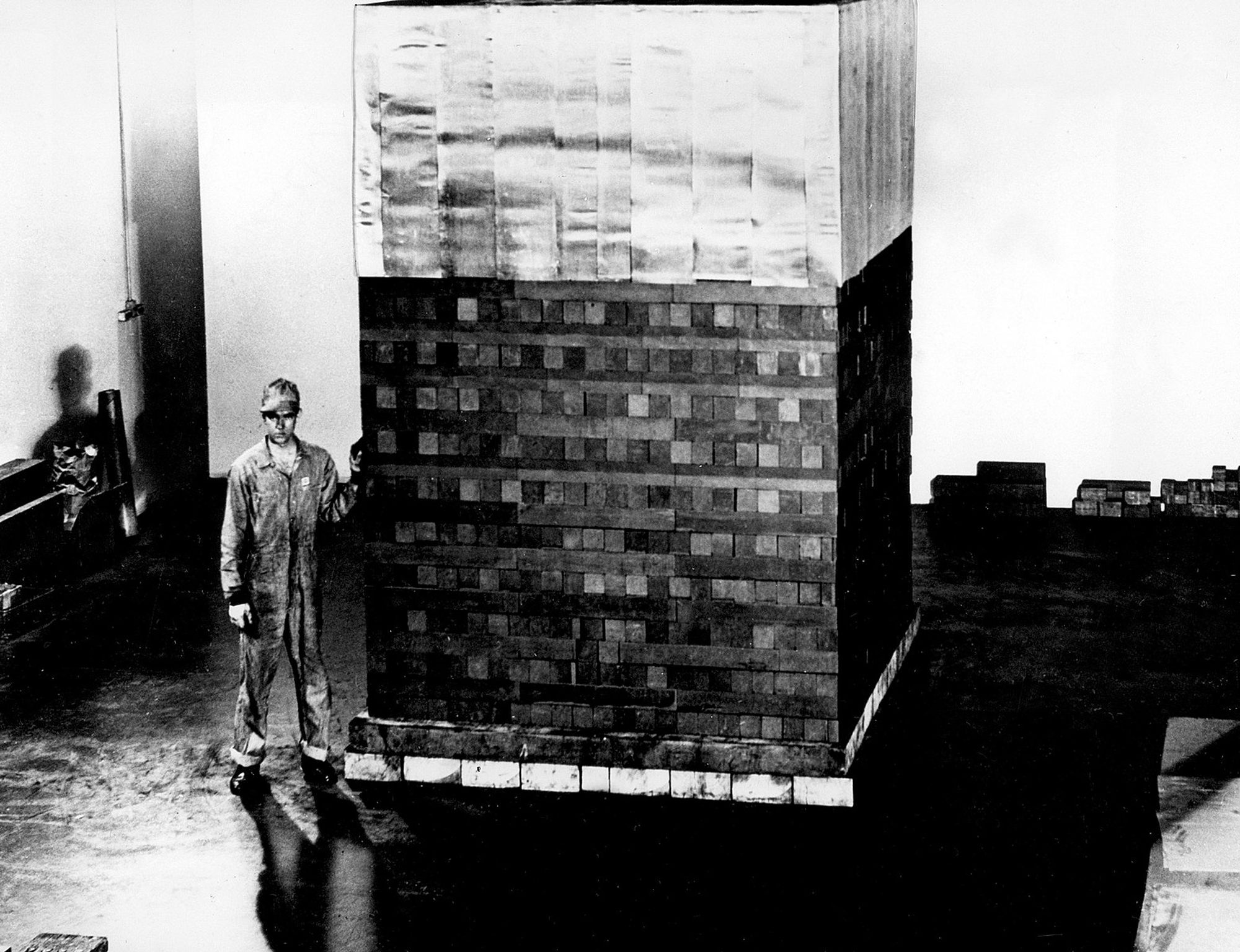 One of at least 29 experimental piles that were constructed in 1942.U.S. Department of Energy via Flickr.

On these four nights, the International Space Station (ISS) makes overpasses which will be easily visible to NYC observers. In each case, the ISS will first be visible low in the northwest, then brighten as it quickly rises higher, then finally disappear about four minutes later, in the eastern half of the sky. You can tell it's not a plane because (a) it doesn't blink and (b) it disappears—when it enters the Earth's shadow. These particular overpasses are the brightest of the month, because they occur pretty close to overhead. It's a great return for five minutes of viewing!

You can study the times yourself from the website Heavens-Above.com. Here are the times:

All magnitude -3.5 (about as bright as Venus), and all starting low in the northwest. 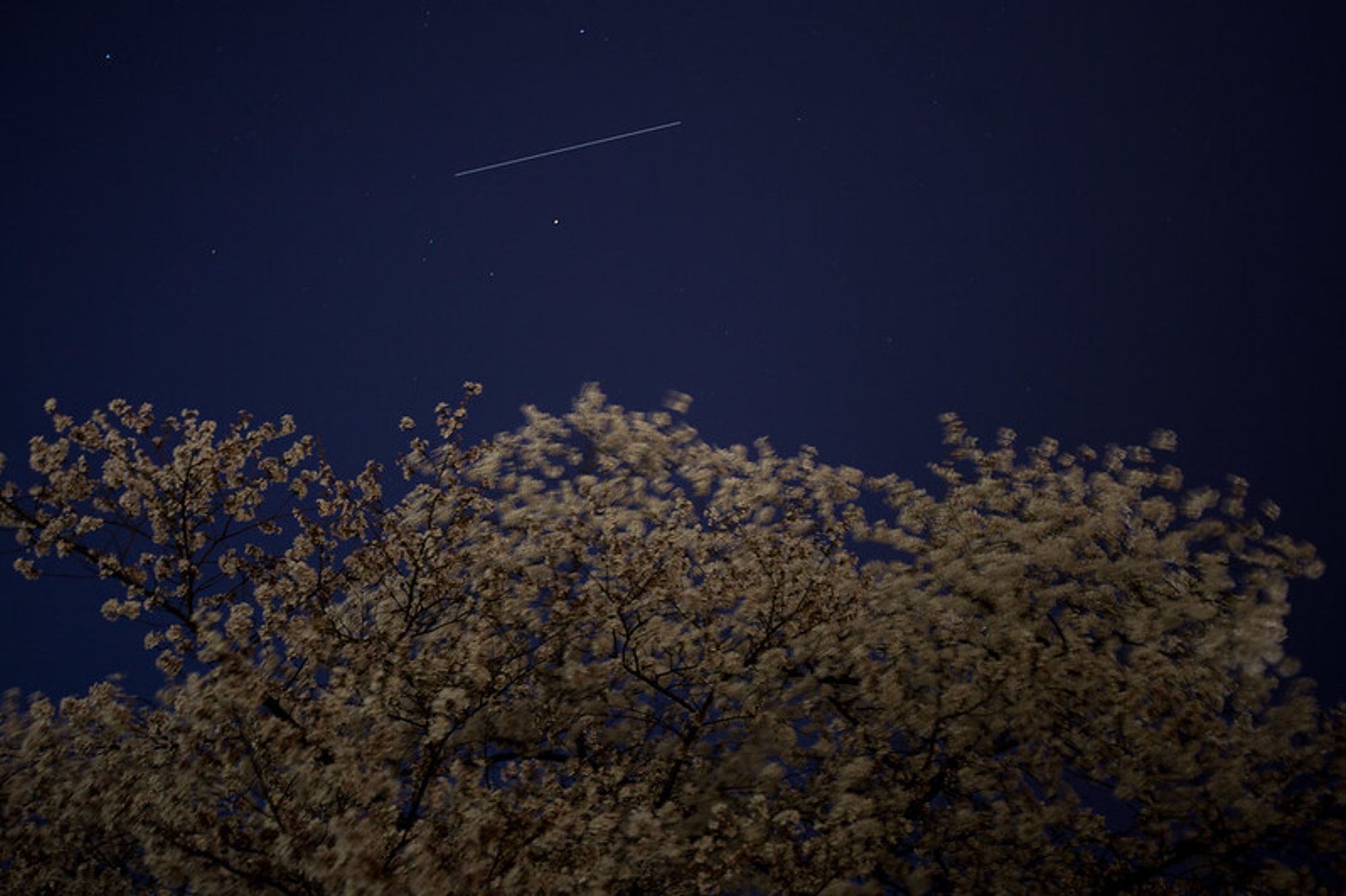 A ten-second exposure of the ISS as it flies over the grounds of the U.S. Capitol on Wednesday, March 29th, 2017.NASA via Flickr.

Death of Omar Khayyam in 1148. Perhaps the last of the great Persian astronomers… and my favorite.

Up from Earth's center through the Seventh Gate,

I rose, and on the throne of Saturn sate.

And many knots unravell'd by the road

But not the knot of Human Death and Fate.

Earliest Sunset for NYC (4:28 pm EST). This might be surprising—why isn't it the December solstice, which is always the shortest day (nine hours and 15 minutes)? It's because the exact time of “solar noon” (when the Sun is directly south) wanders by as much as 15 minutes during the year, due to the Sun's inconstant motion (owing to the slight eccentricity in the Earth's orbit). Also, it's only “earliest” by a gnat's eyelash. NYC sunset only varies by 10 minutes for EVERY December day.

On these nights, Mars passes close to the famous bright stars in Gemini: Castor and Pollux.

This morning (basically midnight to dawn on the 14th) is the peak night for the Geminid meteor shower. The Geminids are the strongest and most reliable of the annual showers, but are basically confined to the post-midnight hours since Gemini is below the horizon during the evening. I recommend 2 am to dawn—plus a good sleeping bag and a vantage point well away from city and local lights—and at least one companion. Meteor-watching can be a joyful shared activity, but the long intervals of meteor-less cold really need conversation to spice things up! Also, LIE DOWN; human necks are not naturally designed for this activity.

And after the meteors, drink a toast to Tycho Brahe, born on this day in Denmark in 1546. Tycho's exacting measurements of planetary motions, all done before the invention of telescopes, were the key ingredient to Kepler’s subsequent discovery of the laws of planetary motion. 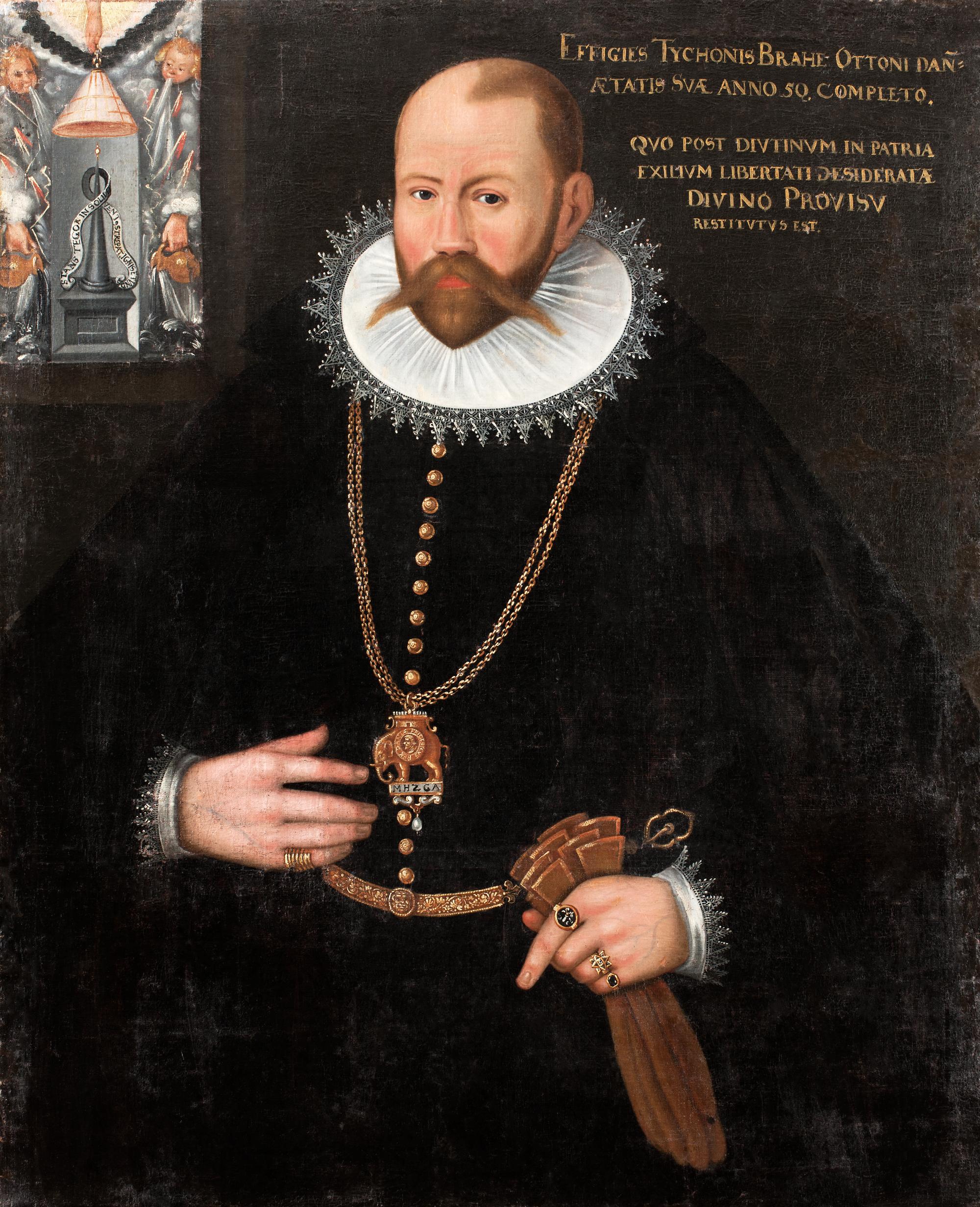 During these ten days in 1995, the Hubble Telescope stared at one spot in space, a direction possessing no special properties—just a random direction, away from any planetary objects, known galaxies, bright stars, etc. The idea was to take the deepest possible image—to sample what the Universe is like at enormous distances, with minimum clutter by nearby stuff.  This historic image, the "Hubble Deep Field," contained ~3000 galaxies, most of which proved to be at enormous distances. It greatly expanded our knowledge of the early Universe, before most of the stars we know about today ever formed. 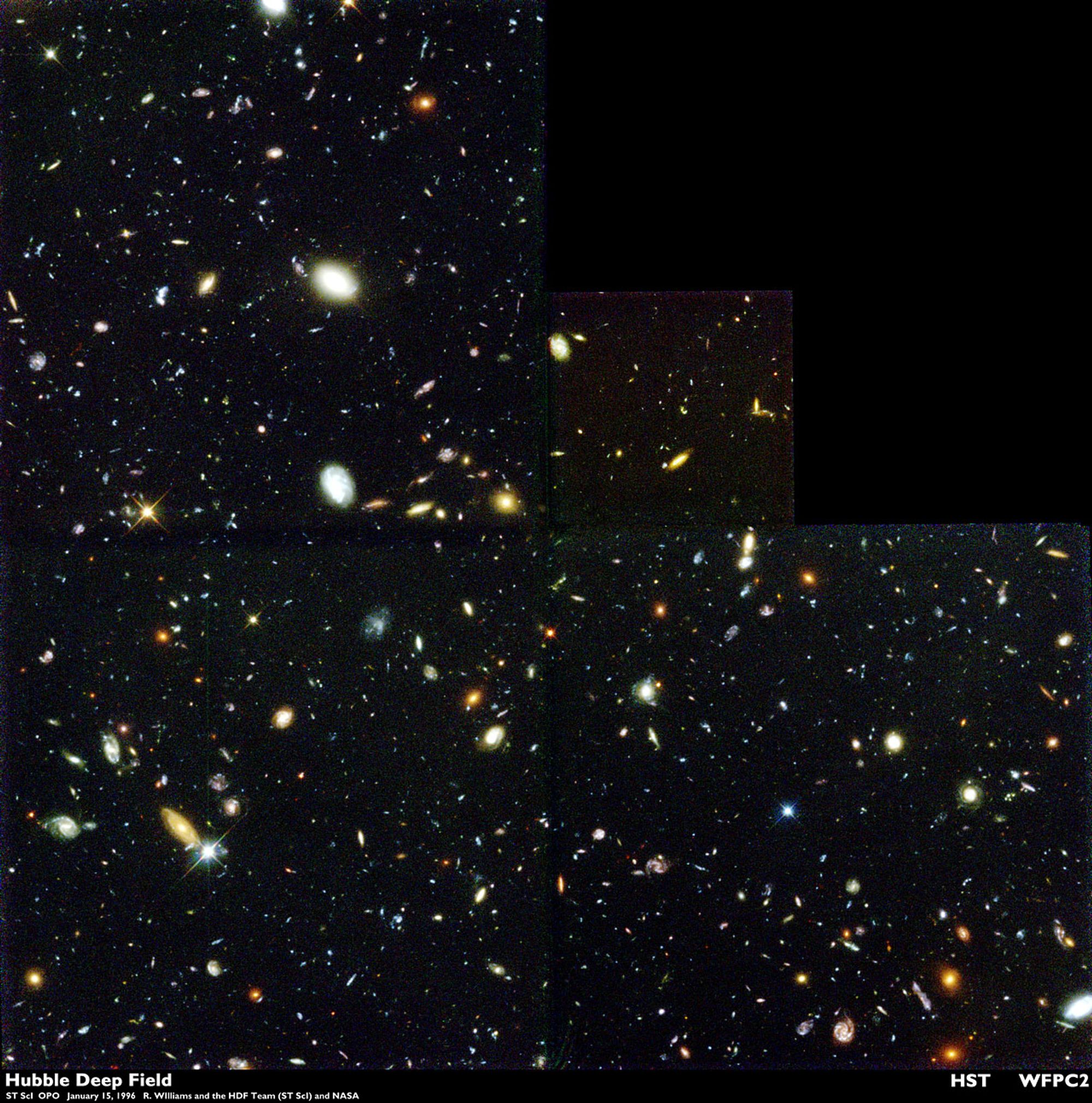 Isaac Newton was born on this day in 1642. Isaac's father died a few months earlier, and Isaac's mother soon remarried, leaving the young Isaac to the care of his grandparents. René Descartes, the other intellectual giant of the 17th century, had a similar childhood. 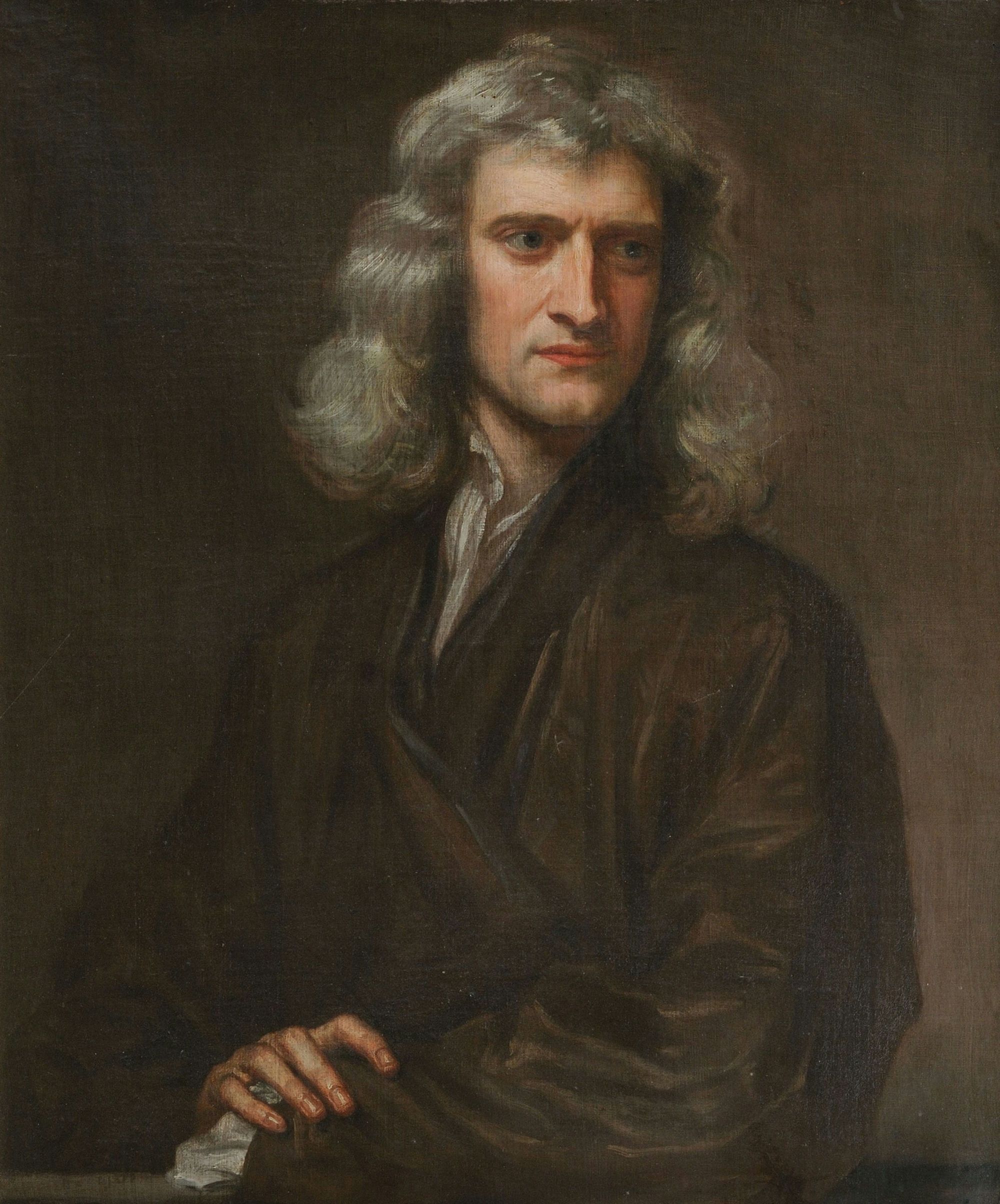 Portrait of Newton by Godfrey Kneller, 1689.Via Wikimedia Commons.

Christmas. The exact timing of Jesus's birth is highly uncertain. Neither the day, month, or year is known. Early Christians may have favored a day near the winter solstice, because that signifies the seasonal rebirth of the Sun's gifts (warmth and light). And some Christians celebrate January 6; that seems to be the origin of the “12 days of Christmas.” Some astronomers have tried to find an astronomical event (planetary conjunction, nova, comet, etc.) around that time, and link it to the story of the Magi “who saw a star in the east.” But none of those events occur in the year zero (most are in the range 2-6 CE). Also, it’s hard to understand how an astronomical sighting can indicate a particular place on Earth—as stated in the Matthew gospel, the only source for the story. Everything in the sky moves!

Johannes Kepler was born on this day in 1571. Kepler's derivation of the precise orbit of planets (ellipses) was the first to establish that the planets moved in a precise geometric pattern. Arthur Koestler wrote a great popular book about Kepler—The Watershed. It was part of an equally great popular book about the Scientific Revolution—The Sleepwalkers. 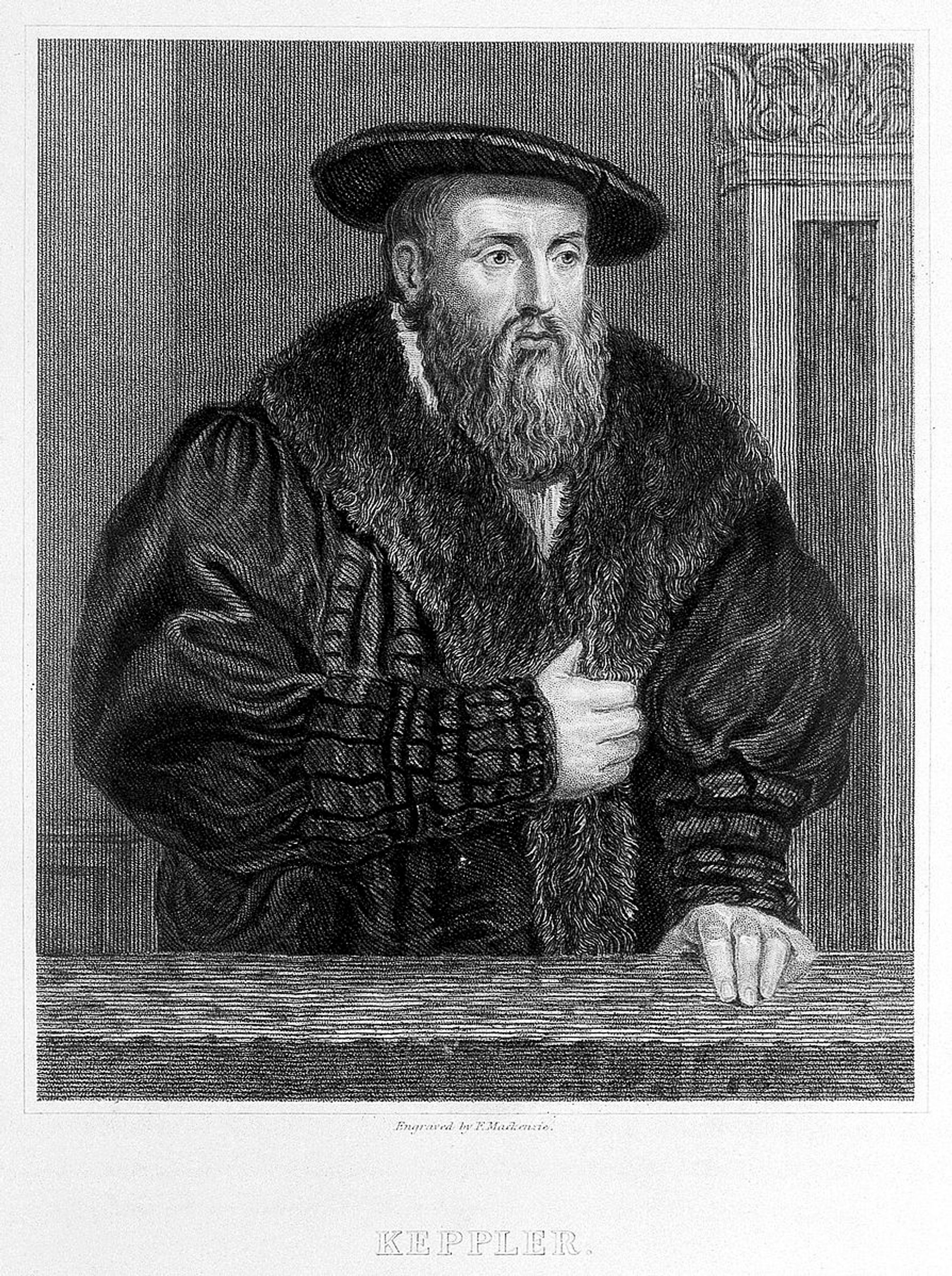