Dramatic highlights from the skies above New York City by intrepid astronomer Joe Patterson.
The opposition effect, a brightness surge that is visible on Saturn rings when the Sun is directly behind the spacecraft.NASA/JPL/Space Science Institute.
BY Joe Patterson
Prof. Joe Patterson is a professor of Astronomy at Columbia University, an observational astronomer, and a baseball enthusiast. (He was also our editor-in-chief’s first astronomy professor.)

First quarter Moon. This morning, or any clear morning in early August, look for Orion rising low in the east about an hour before dawn. “Ghost of the shimmering summer dawn / King of the winter nights!” My personal favorite season-defining sight in the sky.

Tonight the first-quarter Moon is close to Antares (“Ant-Ares”= “rival of Mars”). Antares is a red supergiant star, just about the reddest and largest (in diameter) star in the night sky. Superimposed on the Solar System, it would swallow up Mercury, Venus, Earth, and Mars. The Sun’s gas-giant planets, way out there in the solar system, would survive, but would be so hot that all their hydrogen and helium would boil away. But who knows, maybe not oxygen and nitrogen. Come to think of it, they might turn into Earth-like planets… 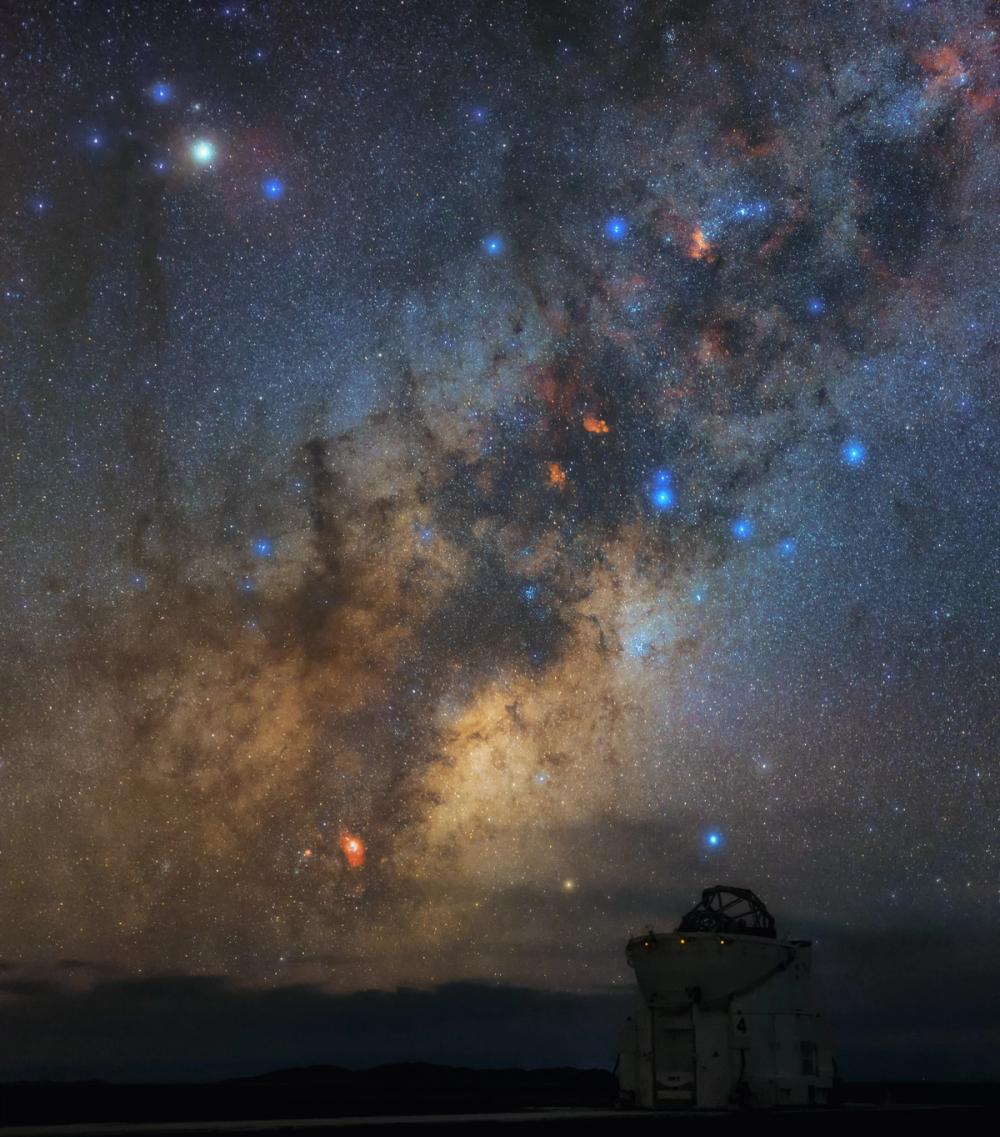 Antares (very bright star in upper left corner) overlooking an Auxiliary Telescope atop Cerro Paranal, Chile. The pink glow in many objects is the telltale sign of a nebula—a star-forming region. The constellation Scorpius is chock-full of nebulae.ESO/B. Tafreshi.

Today, the Sun enters the constellation Leo. But it entered the astrological sign of Leo 20 days ago, on July 22. What's up with that? Part of this shift arises from minor tinkering of constellation boundaries by humans… but most of it is courtesy of the Earth's wobbling axis. In addition to its better-known motions (spin, orbit), the Earth has a third and very subtle motion—the slow precession of its axis, like a wobbling top. The axis now points towards Ursa Minor—in fact, almost exactly towards the star Polaris, which we therefore call “The North Star.” But the axis slowly wobbles around the sky, and this causes the seasons to slowly lose touch with the constellations. Our calendar, however, pays attention to seasons, not constellations. So most people who think they're “Leos” are actually “Cancers.” I don't know what the implications are…but it doesn't sound good.

All night tonight, the Earth's journey takes it through a diffuse stream of cosmic dust particles which were once shed by Comet Tempel-Tuttle (named after that comet's discoverers). When a comet sheds matter (dust particles), it doesn't really go anywhere—it just wanders off ever so slightly, continuing in roughly the same orbit for thousands of years. Those little dust particles are like the odor particles emitted by humans and detected by bloodhounds. Except that the Earth, unlike bloodhounds, must follow the law of gravity, and it only encounters that stream when its orbit intersects the stream's orbit, in early August.

The densest part of that stream is only crossed every August 12, and many of the dust particles fall to Earth with a streak of light—a meteor. The meteors appear all over the sky…but if you trace back the streaks of light, they all seem to be coming from the constellation Perseus. Hence the name: the Perseid meteor shower. It’s the most reliable of the annual showers, and many stargazers plan summer outings to watch the Perseids. Unfortunately for us in 2022, it coincides with the Full Moon, whose brilliant light will wash out all but the brightest of meteors. 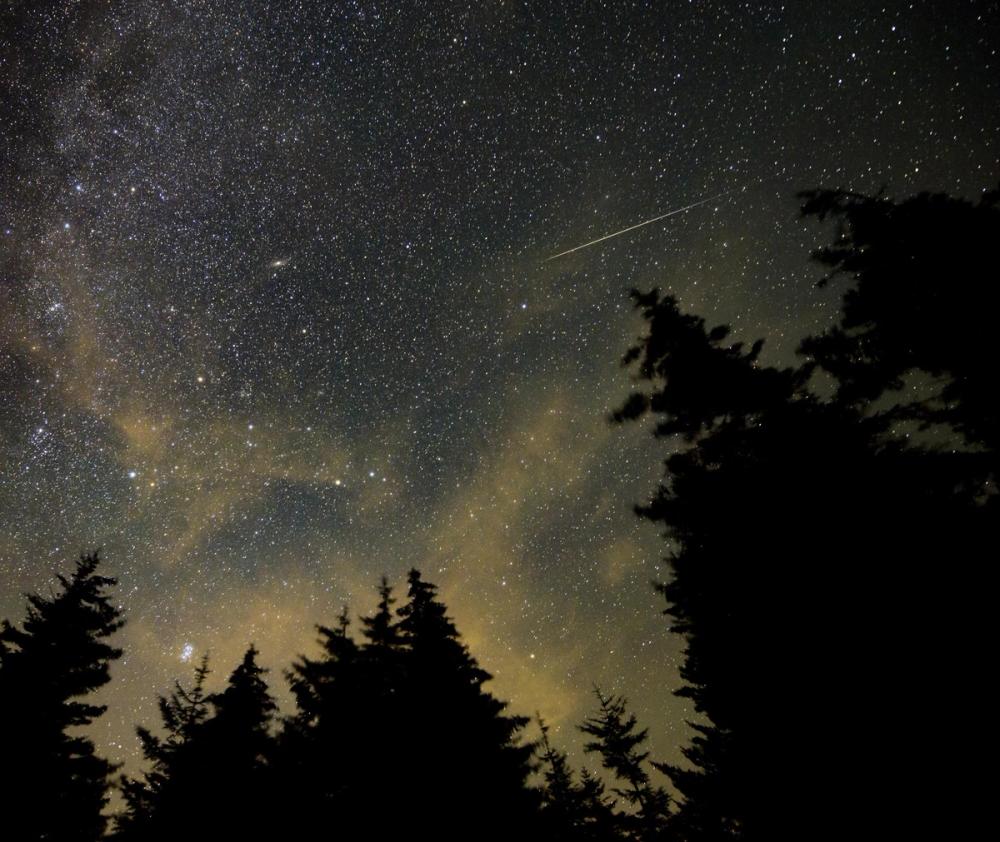 30 second exposure of a meteor streaking across the sky during the annual Perseid meteor shower, Wednesday, Aug. 11, 2021, in Spruce Knob, West Virginia.NASA/Bill Ingalls.

Saturn at opposition. It's now exactly 180 degrees from the Sun, which means that it rises at sunset and sets at sunrise—therefore in the sky all night long. So: look directly south at about 1 am any night in mid-August. That medium-bright star you see is probably Saturn (there aren't many bright stars in that part of the sky to confuse matters). Needless to say, it’s GREAT for telescopic viewing. Except for a few weeks every 19 years—when the rings go edge-on, and become invisible—Saturn is always a grand showpiece in the sky.

On these nights, the gibbous Moon appears next to Jupiter, whose brilliant light makes it unmistakable in the sky.

Last quarter Moon. Rising around midnight, directly south around dawn. That little cluster of stars next to the Moon is the Pleiades, the most famous star cluster in the sky.

This was the date of the “Great American Eclipse” in 2017. The moon's shadow swept from the Oregon coast, across the Rockies and the Midwest, before finally heading out to sea near Charleston, South Carolina. And except for the area around Charleston, nearly all observers enjoyed beautiful weather, and got to witness this once-in-a-lifetime spectacle. I'm sure it made more than a few future careers in astronomy, and ignited a lifelong eclipse fascination for many thousands more. And the USA is allocated one more, coming up in 2024 (April 8).

If you spend your life rooted to one spot on Earth, you'll have to wait about 400 years between total solar eclipses—and that's assuming no cloudy days! But NYC is in the midst of a streak: FOUR between 1925 and 2200. For the 1925 event (total above 96th Street in Manhattan), the New York Times scolded the Columbia astronomers in headlines for getting the time wrong by four seconds. 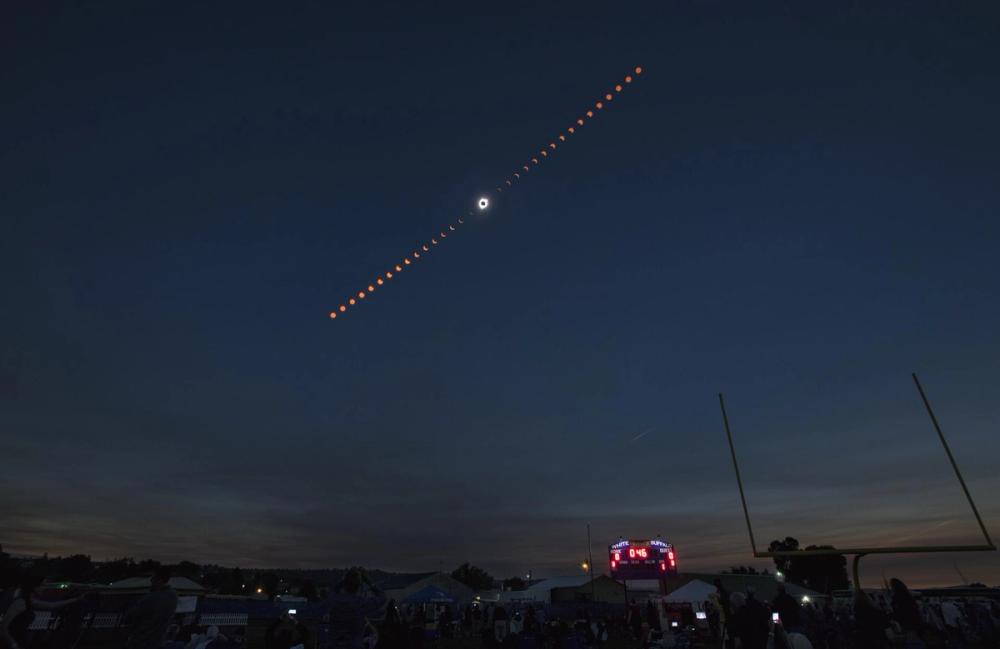 In this morning’s sky, between 5:38 and 5:44 am, look for a brilliant overpass of New York City by the International Space Station. Nearly overhead and traveling West to East, at precisely 5:41 am…with Sir Isaac Newton at the controls.

On this day in 1835, the first installment of the most successful moon hoax of all time was published in The New York Sun—revealing the amazing discoveries of John Herschel with “an immense telescope” newly installed at the Cape of Good Hope. The author, Richard Locke, reported that Herschel had found the Moon with rivers, abundant wildlife, and humanoids with wings. There were no photographs to prove it (hey, photography was still a decade away), but there were some great, great drawings.

Locke was no stranger to hoaxes, and hoaxes were not rare in the 19th century literary world. They were great for the sale of newspapers, which at the time were sold on the street, with barkers excitedly announcing the juiciest story. This series (there were five more issues) really energized the popularity of the Sun. Unfortunately for science, fate intervened. The last issue reported that the telescope was so immense that humans couldn't handle it. Someone trained it on the Sun a week later, in search of yet more amazing discoveries…and wouldn't you know it, that burned down the whole observatory. No more discoveries to report. Nor even a trace of the telescope for party-pooping investigative reporters to examine.

Edgar Allen Poe was plenty jealous about this. He had earlier published a very similar story, with a traveler flying to the Moon (in a balloon) and finding similar goings-on. But as a story, with obvious satire and no pretense of accuracy, it just didn't have the impact of a real astronomical discovery. 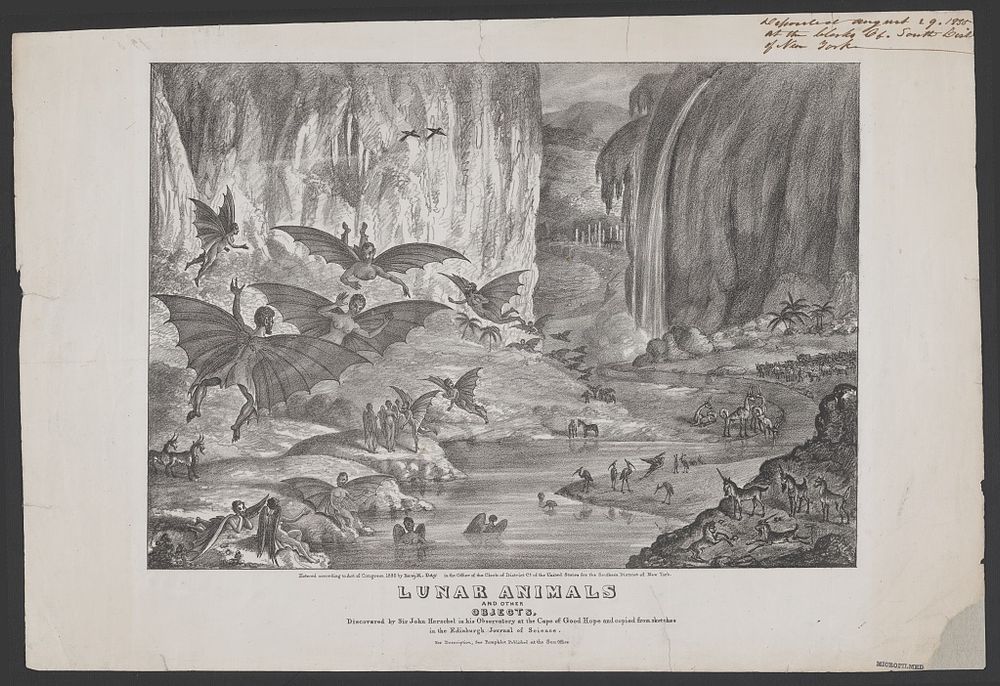 Mercury is at “greatest eastern elongation” (27 degrees) today. If you have a clear western horizon, look straight west around 30-60 minutes after sunset, quite low to the horizon. See a bright starlike object there, not blinking like airplanes do? That's Mercury. Not many modern people have ever seen Mercury. According to one story, even Copernicus never did. With tall buildings, city lights, and air pollution, the odds are really stacked against you—but not this week! Mercury is the namesake of Wednesday—Woden's day, or miercoles—and governs wealth, commerce, fertility, and thievery. In case any of those activities interest you.

Also on this day in 1883, the greatest volcanic explosion in history occurred: Krakatoa! The blast was heard by humans 3,000 miles away, and the pressure wave traveled around the Earth three times before finally becoming undetectable by barographs. The eruption was 10,000 times larger than the Hiroshima bomb. Volcanic dust was hurled into the upper atmosphere, where it lingered for many months, lowering the Earth's average temperature by about one degree. Krakatoa is part of the “Ring of Fire,” the huge region where the Pacific Plate crashes into plates to its west (Japan, Southeast Asia) and east (California, the Andes, etc.). The eruptions of Mount Saint Helens (1980) and Pinatubo (1991) are other members. 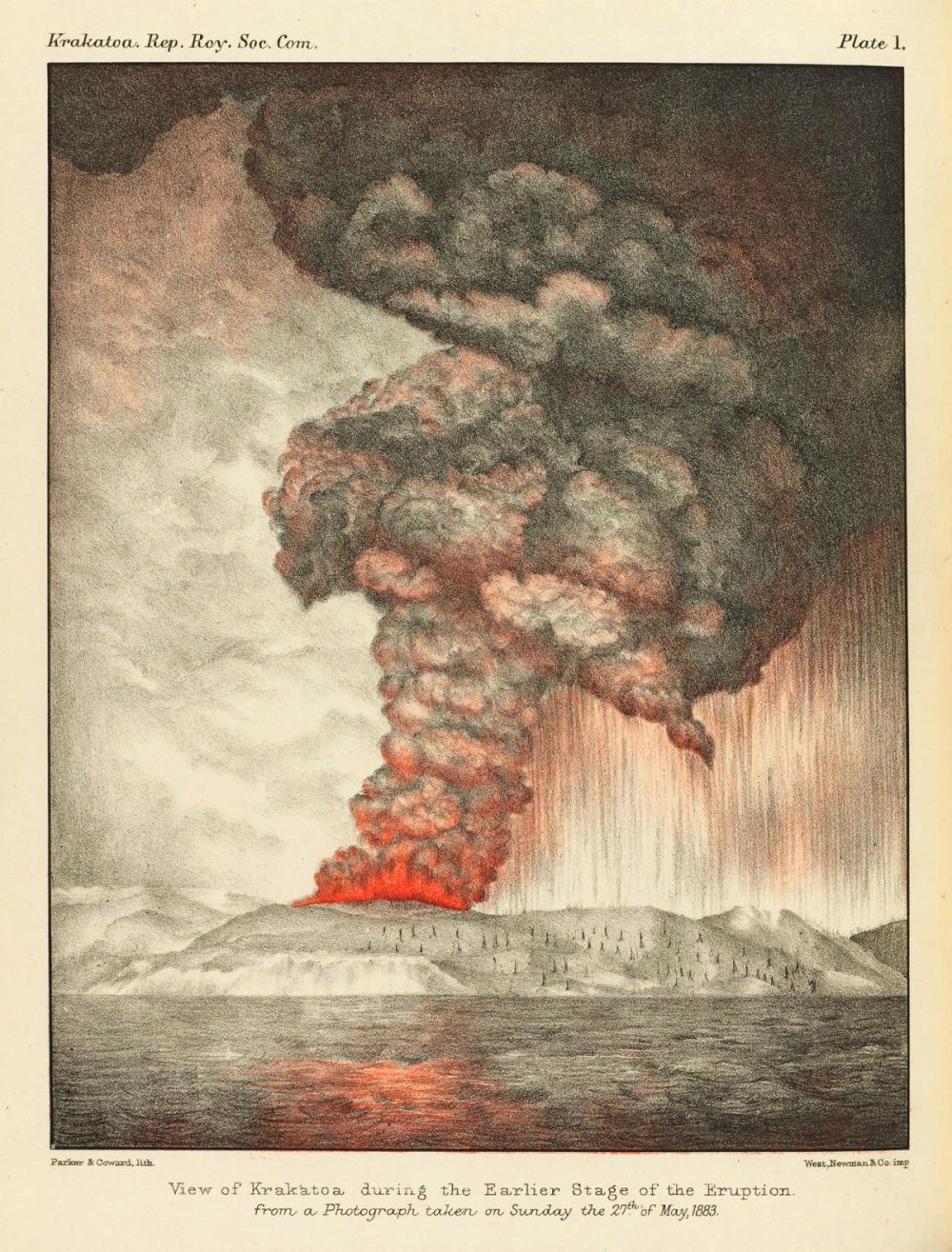 An 1888 lithograph of the 1883 eruption of Krakatoa.Public domain/Report of the Krakatoa Committee of the Royal Society.

A really good evening for Mercury viewing, because the young crescent Moon will be standing just above and to the right of Mercury tonight. No nearby bright stars to distract. See note for August 27.