Whether following a team of botanists or geriatric residents in a senior center, Fall 2020 Pioneer Works Visual Arts Resident Erin Johnson uses video to find beauty—and rebellion—in the power of the collective.
art 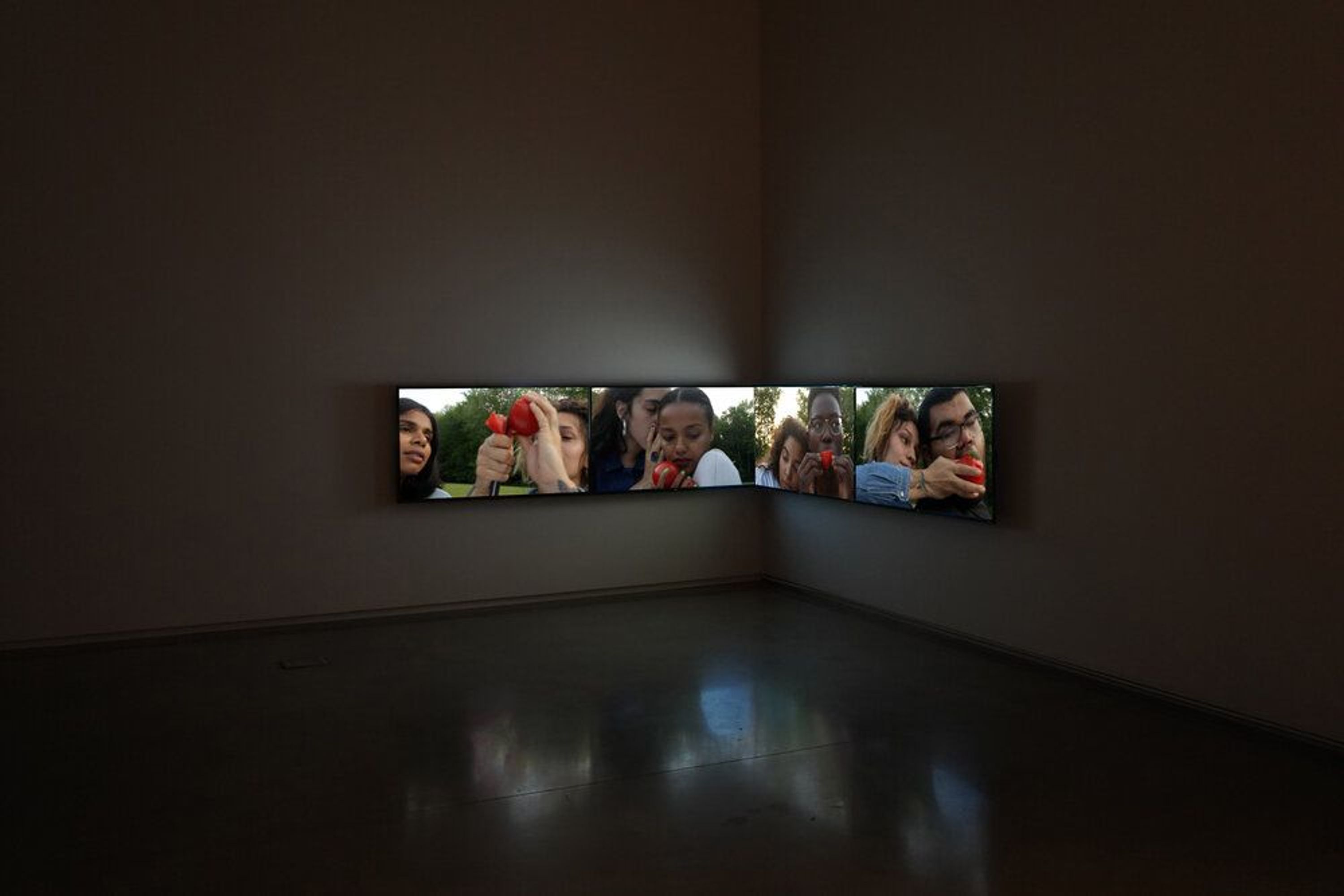 BY Erin Johnson
Erin Johnson is an artist living and working in Brooklyn. Her single and multi-channel video installations blend documentary, experimental, and narrative filmmaking devices and foreground the ways in which individual lives and sociopolitical realities merge.

My video installations blend documentary, experimental, and narrative filmmaking devices, and foreground the ways in which individual lives and sociopolitical realities merge. Comprised of footage of site-specific performances, the films explore how power structures are communicated through relationships, focusing on the complexity of collectivity, the wide-ranging consequences of scientific research, as well as resistance, desire, and the queer body. 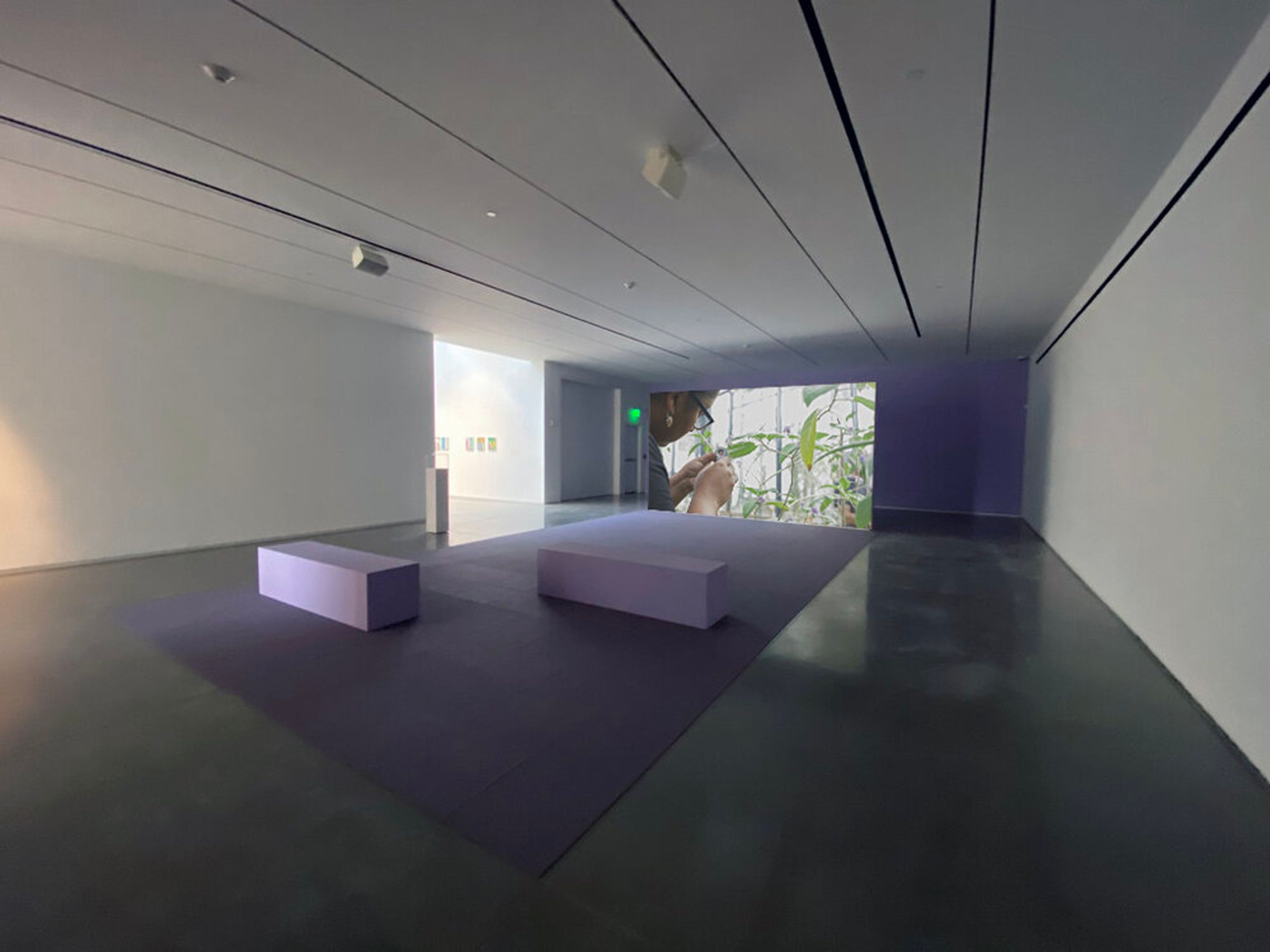 Installation view of There are things in this world that are yet to be named (2020), from the exhibition Unnamed for Decades, Center for Maine Contemporary Art. 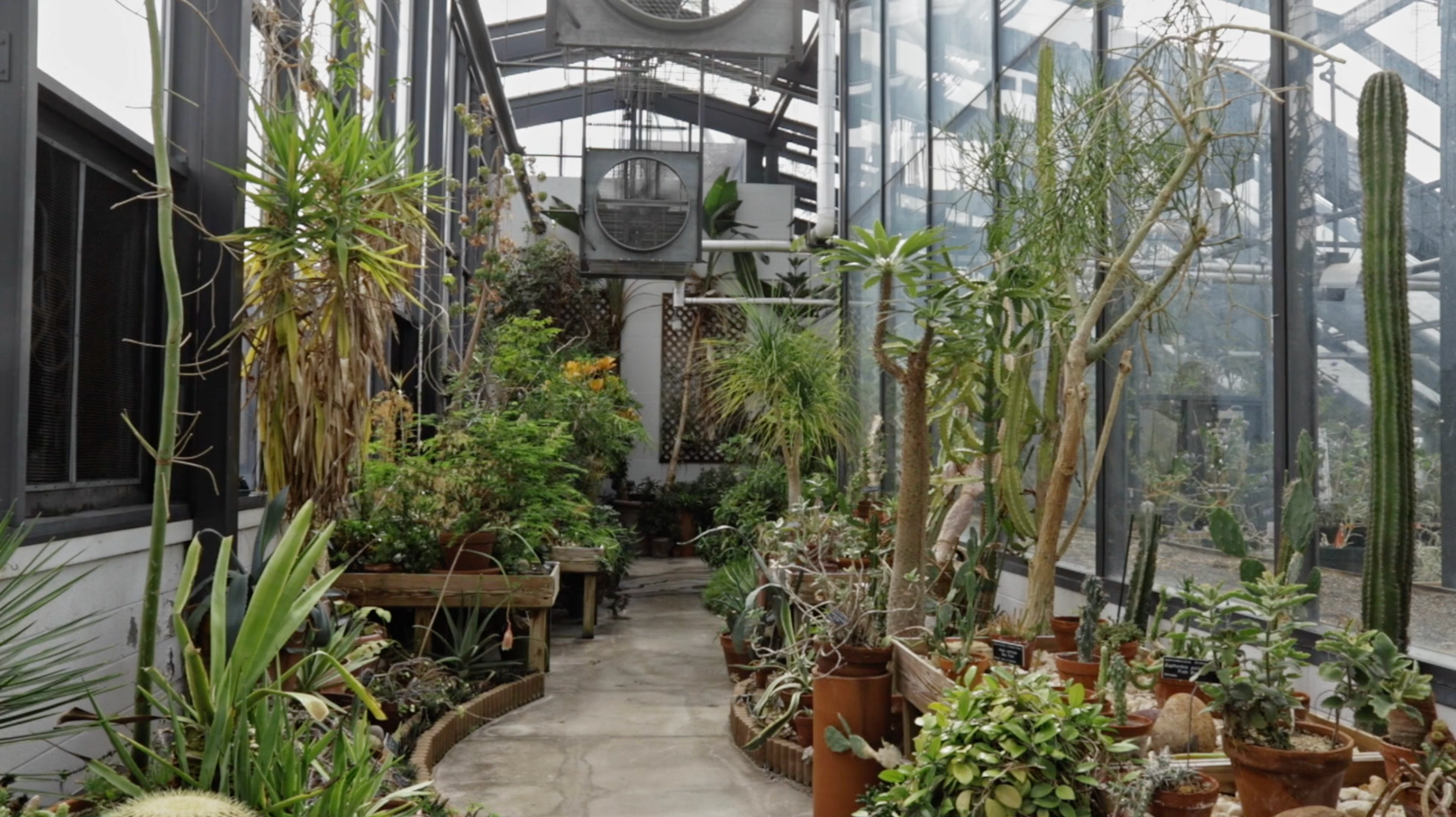 There are things in this world that are yet to be named takes as its starting point Solanum plastisexum, an Australian bush tomato whose sexual expression appears to be unpredictable and unstable, challenging even the fluid norms of the plant kingdom. Because it doesn’t fit within a constant sexual binary, it evaded classification by botanists for decades. The video—filmed as over 50 million acres of land burned in wildfires across Australia—combines footage of the team of botanists who recently named Solanum plastisexum in their lab in Pennsylvania, with shots of Australian plants cultivated in the United States at The Huntington library, art museum, and gardens in Los Angeles. The voice-over is an amalgamation of texts including interviews with botanist Tanisha Williams and love letters between Rachel Carson and Dorothy Freeman. Carson and Freeman sustained a romantic, closeted correspondence throughout Carson’s writing of seminal environmental texts. 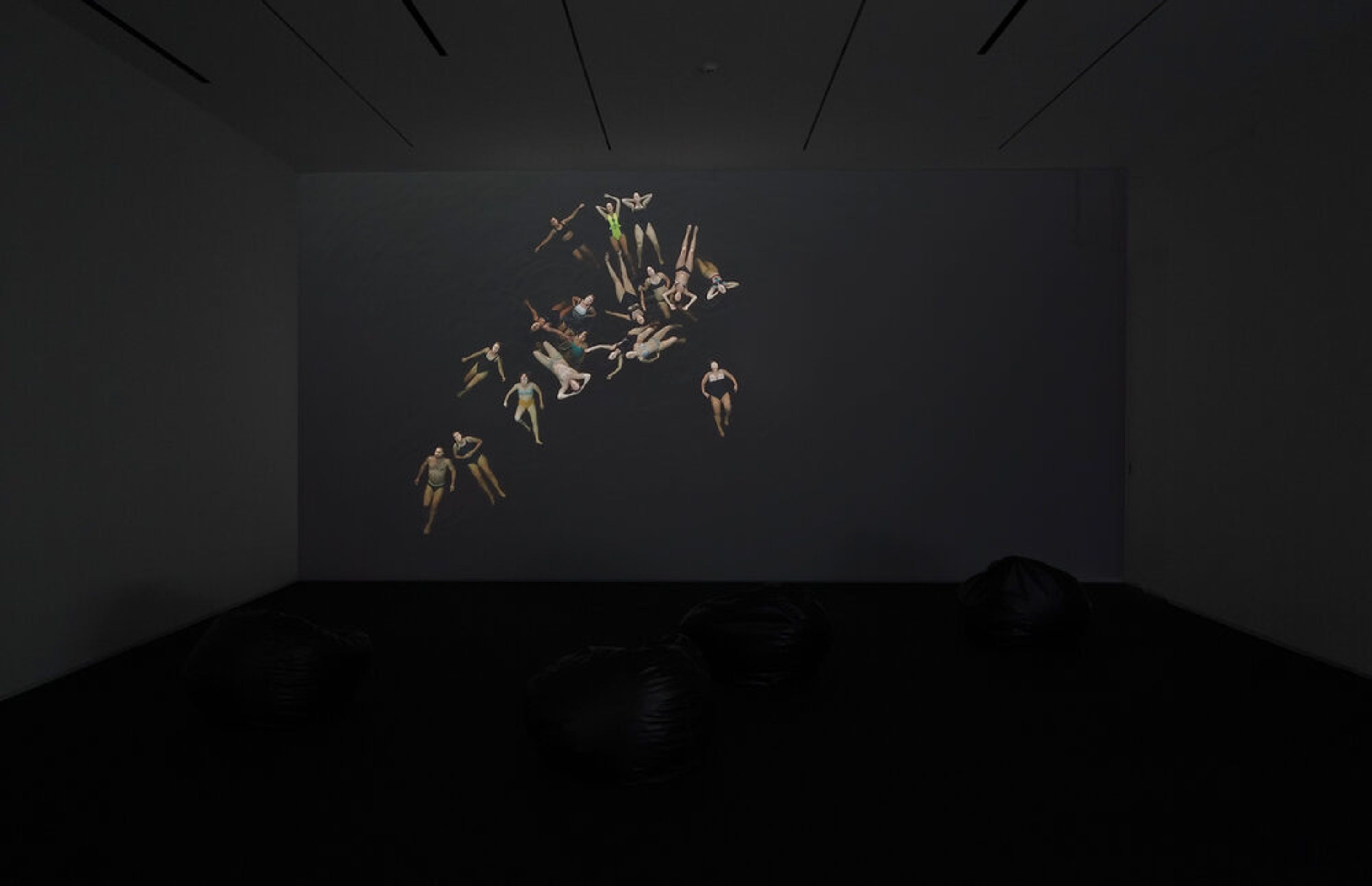 Installation view of Lake (Skowhegan, ME) (2020), in the exhibition Unnamed for Decades, Center for Maine Contemporary Art. 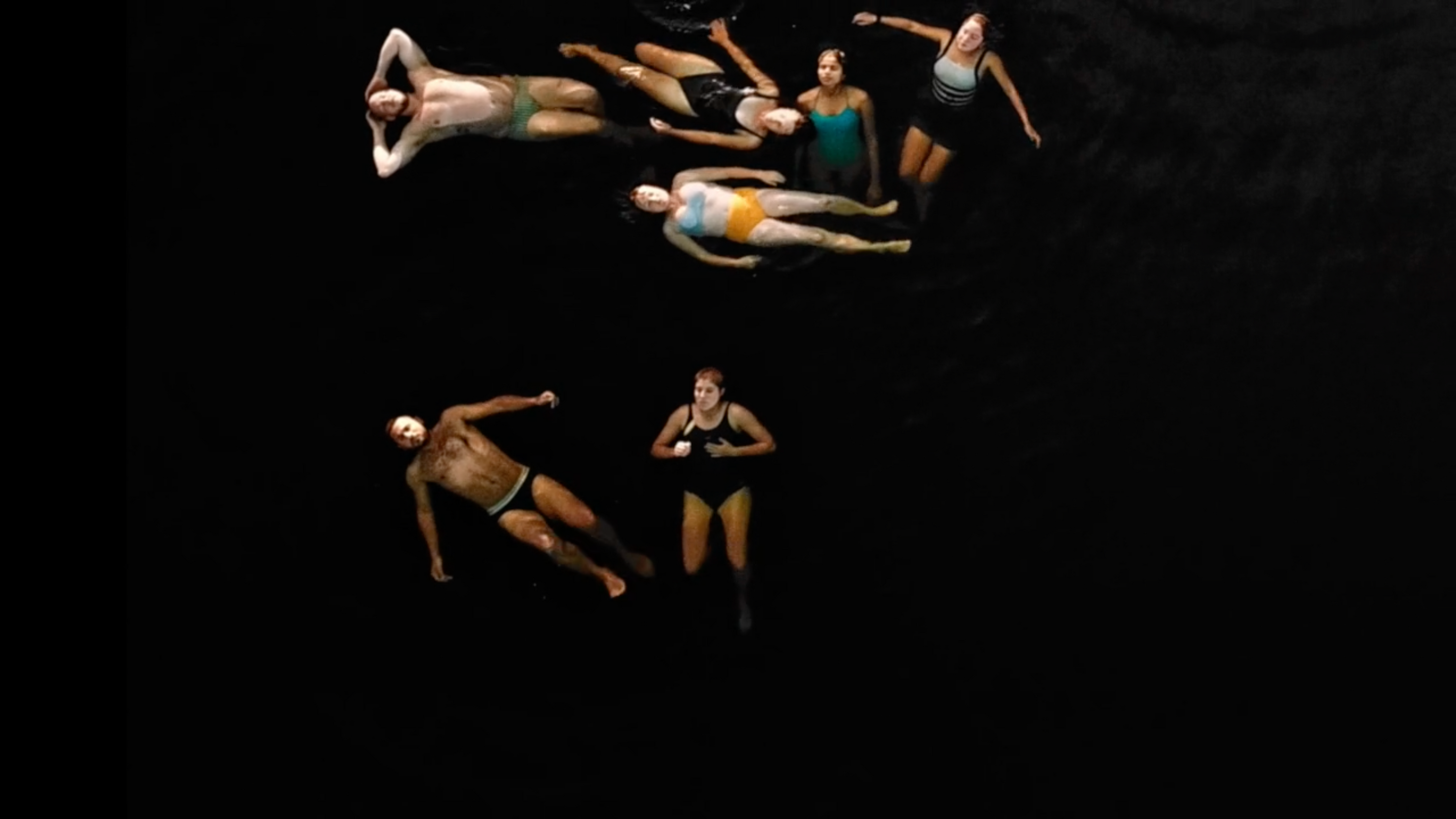 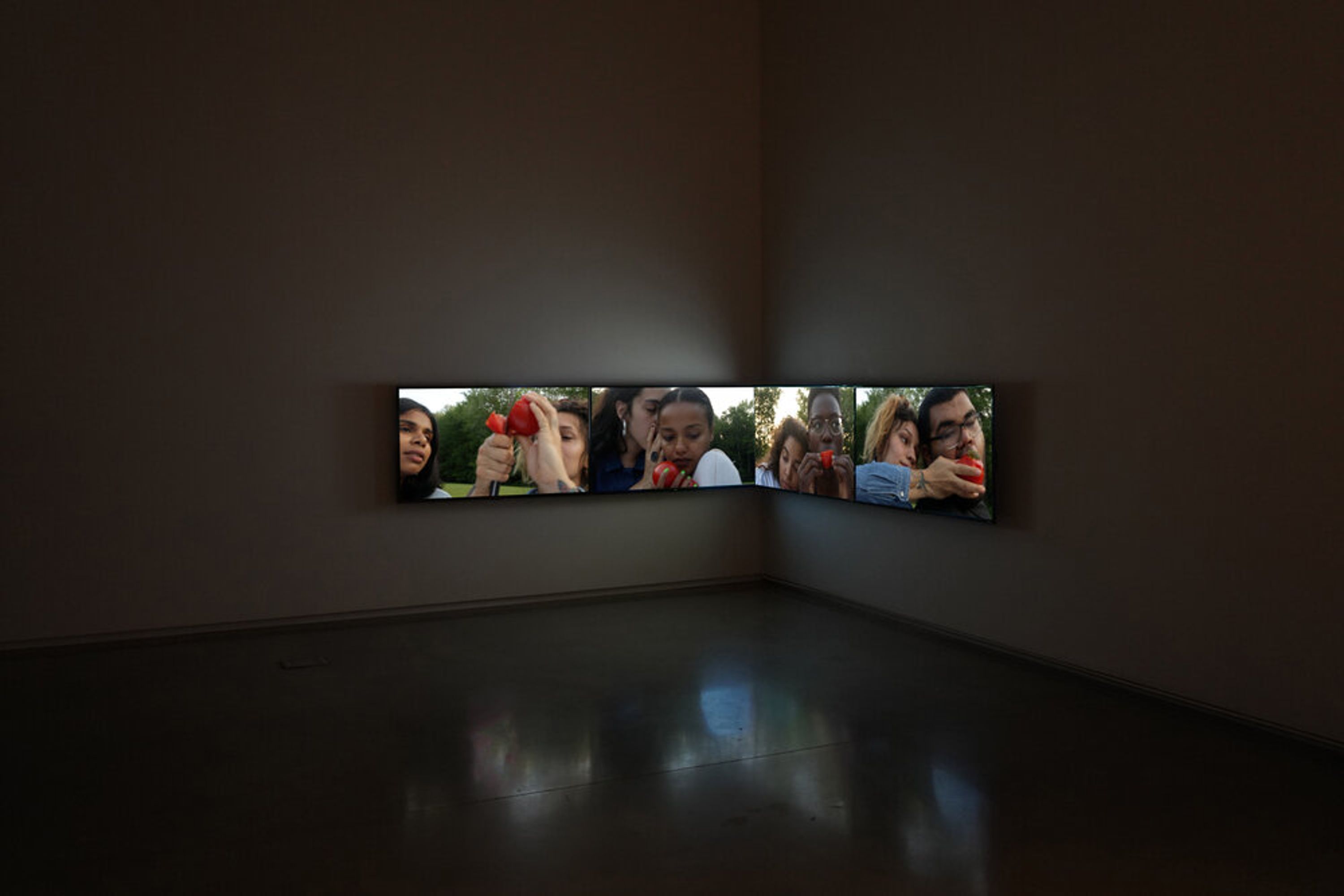 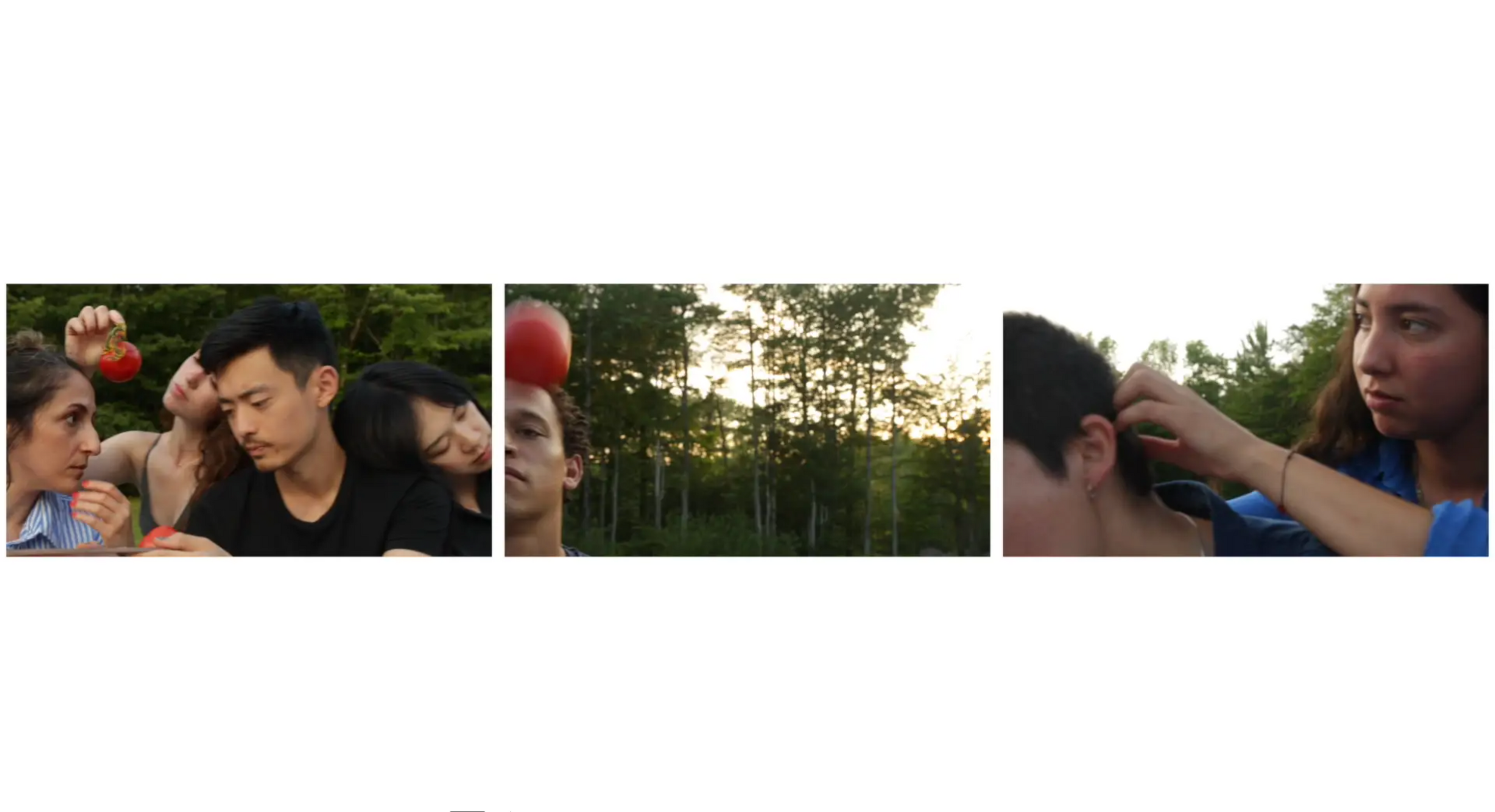 While in residence at Skowhegan School of Painting and Sculpture in 2019, I began two video projects. For the foreseeable future, I will film the same group of friends, peers, and lovers from my Skowhegan cohort as they engage in collective queer, desirous, and improvisational exchanges. The Floating series has, to date, been filmed on a lake in Skowhegan, ME and a bay in Brooklyn, NY. In the videos, the group is seen from a bird’s-eye view as they move in and out of floating, drift in and out of the frame, bump into each other and glide apart. The Eating series has, to date, been filmed in a field in Skowhegan, ME with tomatoes and a rooftop in Brooklyn, NY with oranges. The videos follow the group as they eat, lick, squeeze, share, and caress annually changing fruits and vegetables. The videos reflect on feminist theorist Silvia Federici’s call to “reconnect what capitalism has divided: our relation with nature, with others, and our bodies.” 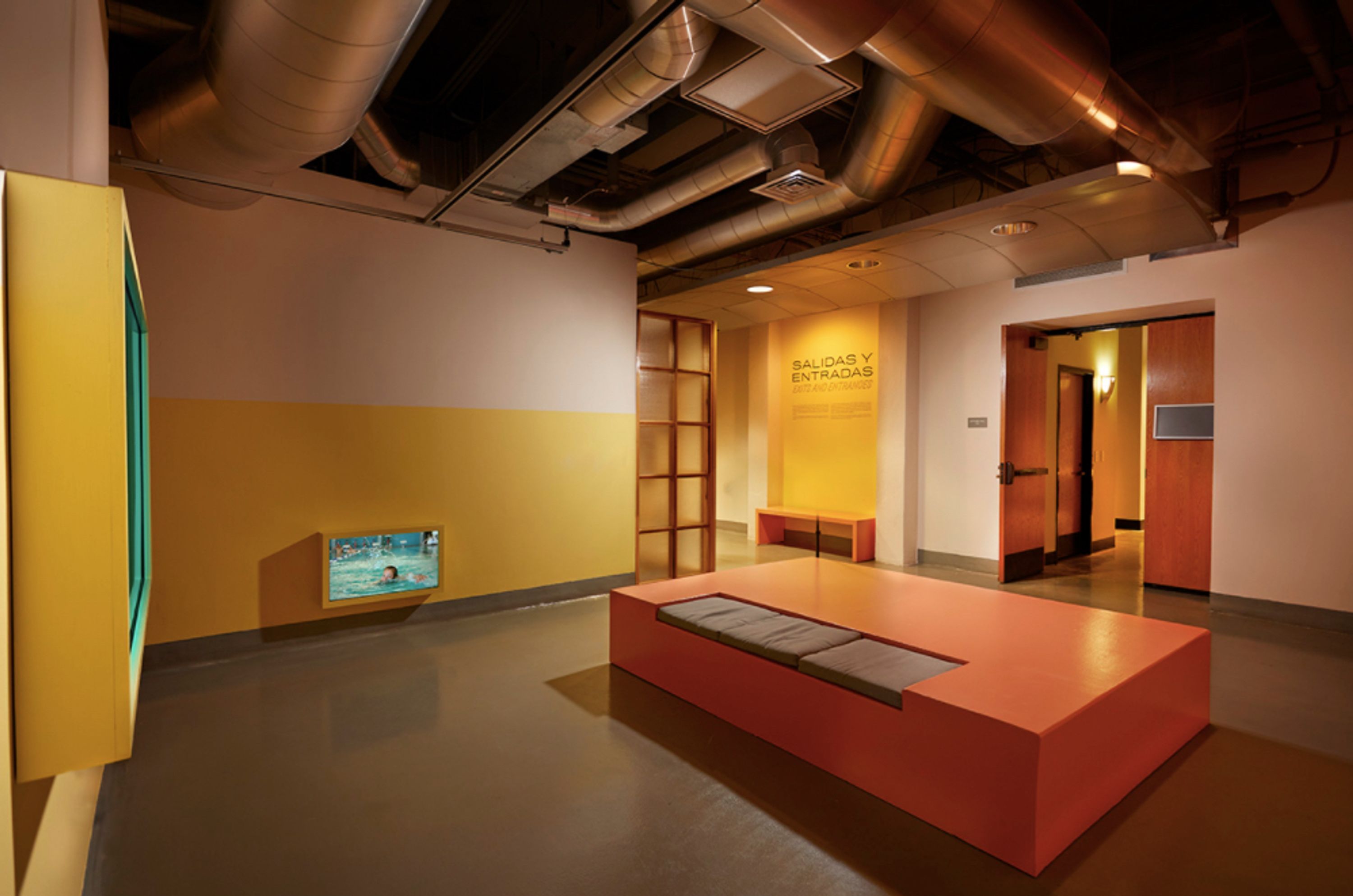 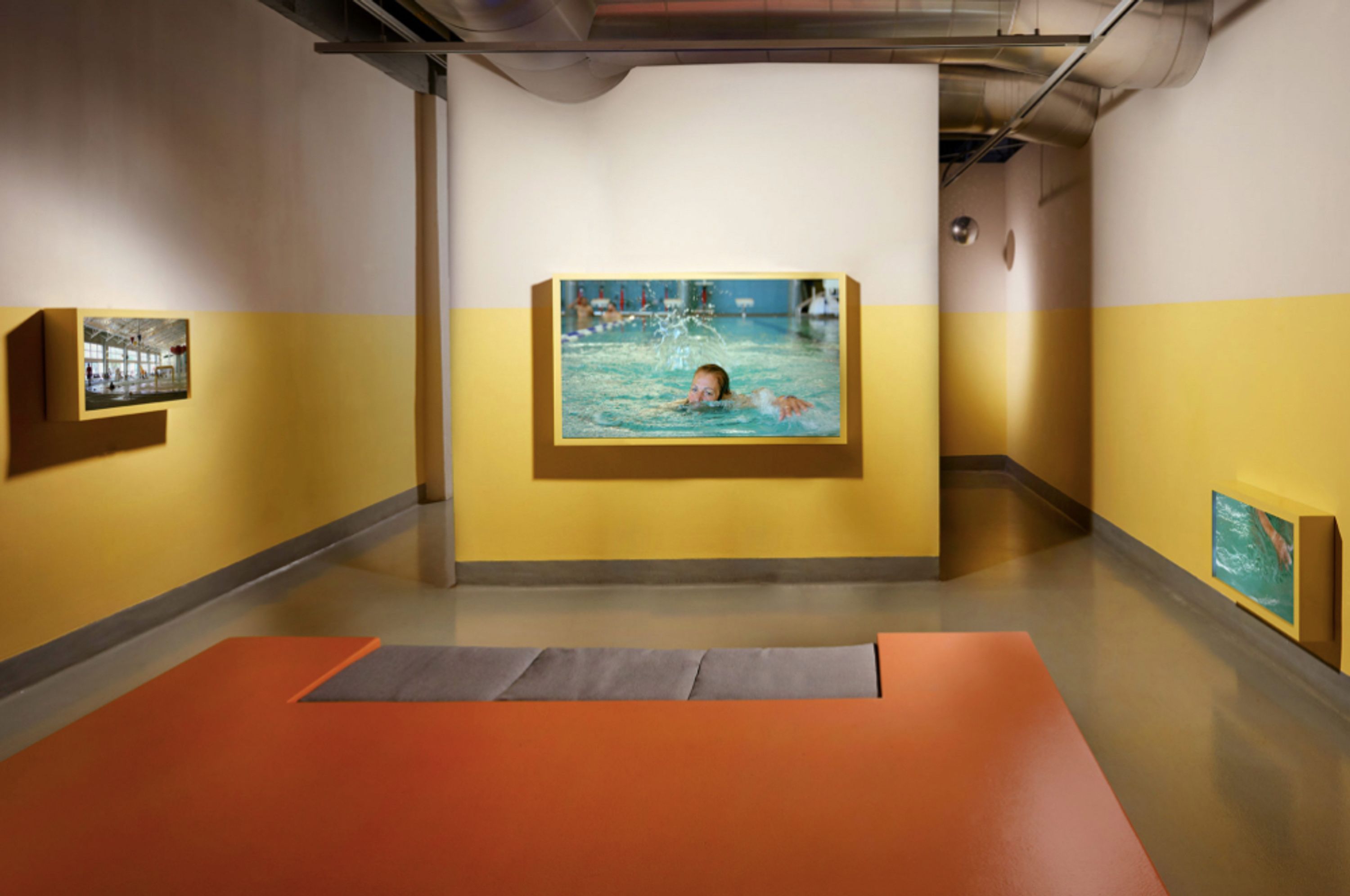 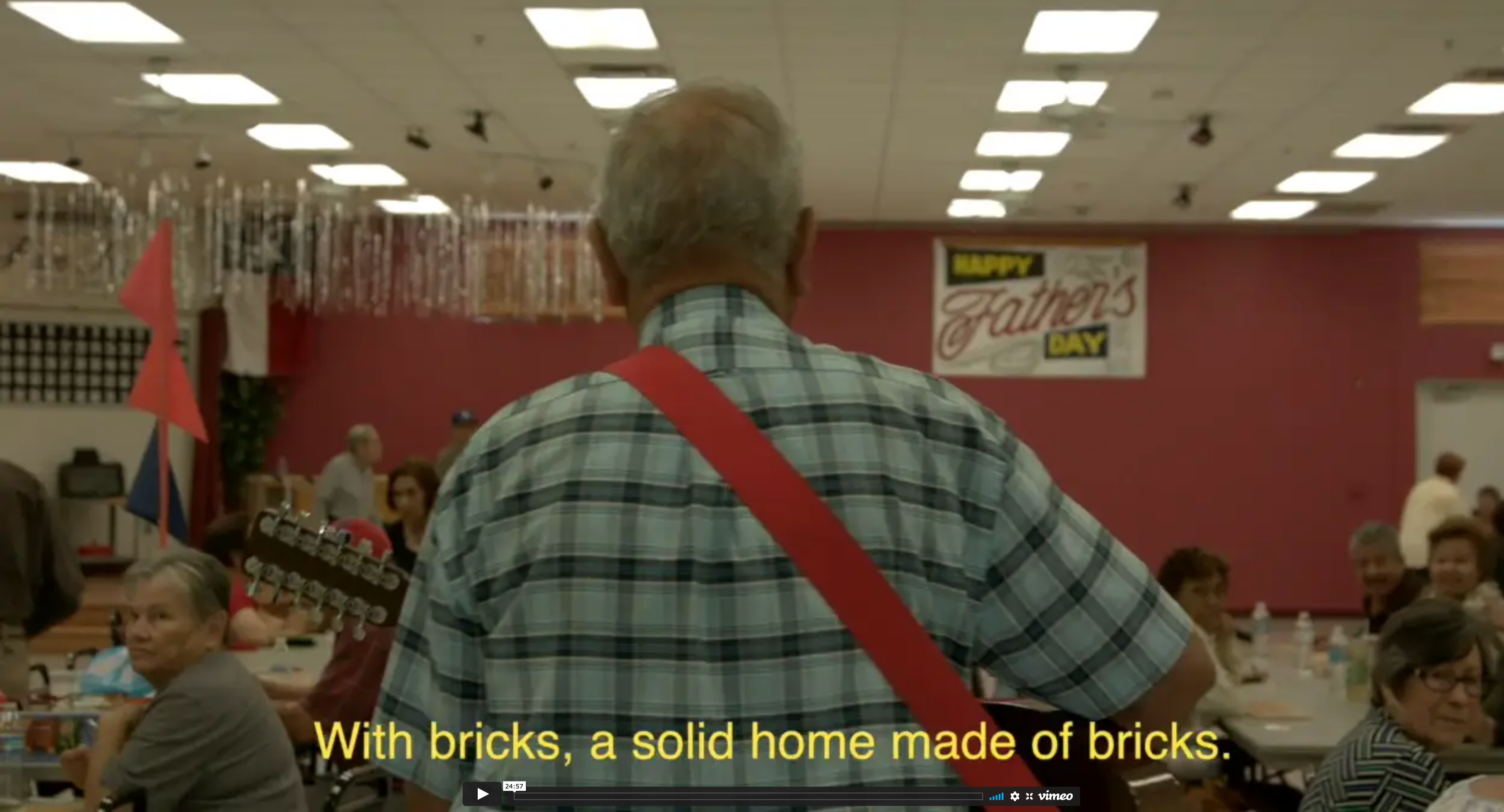